For Windows 10, Microsoft may give its infamous Blue Screen of Death a QR code that users could scan with their smartphones to get more information about the crash.

Microsoft is changing up its dreaded Blue Screen of Death by adding a QR code that users can turn to when their operating system dies and potentially cannot be revived.

The QR code was spotted in Windows 10 Insider Build 14316, which Reddit user javelinnl shared in a post last week.

The error message reads: "Your PC ran into a problem and needs to restart. We're just collecting some error info, and then we'll restart for you."

It also points users to a QR code and notes next to the image that users can get more information about the BSOD and possible fixes by visiting a support link or calling their IT support and providing them with the stop code information. 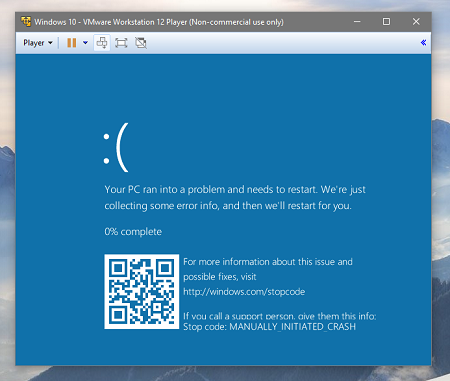 The QR code, noted The Verge, is one of the most significant changes to the dreaded BSOD since the Redmond giant introduced a frowny face to the blue screen and stripped out most of the crash details.

Another variation to the BSOD was trotted out in 2007, when Microsoft rolled its Purple Screen of Death in Windows Vista's Desktop Window Manager.

Although the QR code is in the latest version of the Windows 10 preview, users will not be able to make use of it until Windows 10 is distributed over the summer as an anniversary update, according to The Verge. Then again, users are likely happy if they never have a need for the QR code.

If users find themselves in such a position, they could scan the QR code with their smartphone. And as javelinnl noted on Reddit: "The first thing the new build did in my VM was crash, but instead of just the usual smiley I was greeted by a QR code as well."

With Microsoft's Windows so pervasive in the tech world and QR codes becoming ubiquitous, used on tattoos to Dutch coins, it would not be surprising to see other tech companies rely on these two-dimensional bar code images for their error pages, as well.

Dawn Kawamoto is an Associate Editor for Dark Reading, where she covers cybersecurity news and trends. She is an award-winning journalist who has written and edited technology, management, leadership, career, finance, and innovation stories for such publications as CNET's ... View Full Bio
We welcome your comments on this topic on our social media channels, or [contact us directly] with questions about the site.
Comment  |
Email This  |
Print  |
RSS
More Insights
Webcasts
Key technology trends in 2021 - Making these technologies work for your business
Hybrid Cloud: The Great Balancing Act
More Webcasts
White Papers
Sunburst: Impact and Timeline
Balancing Hybrid Storage as Part of a Hybrid Cloud Data Management Strategy
More White Papers
Reports
The State of DevSecOps Report
The State of Cloud Computing - Fall 2020
More Reports

Perhaps when you use your smartphone to scan the QR code, you get a blue screen of death on your smartphone? Seriously, though, I can understand why a QR code made some sense in this context. But otherwise in North America, aren't these things closer to extinction than to prevalence?
Reply  |  Post Message  |  Messages List  |  Start a Board

So when a user scans that code, does she get some useful information in return? Or is it the same deal as with any of the cryptic Windows error codes that when searched for reveal zero assistance? An error message is only helpful if it provides means to overcome the problem encountered.
Reply  |  Post Message  |  Messages List  |  Start a Board

I'd rather not get the screen either. My hope is that they take a good idea and make it functional. Their support is pretty good but then again when you have a blue screen and need that computer running, the support needs to be ready to help even the most technologoically challenged person with only a QR code!
Reply  |  Post Message  |  Messages List  |  Start a Board

If it works, then great. Of course, I'd rather not get the screen at all, but it's one way to get help. Now, have they trained the help staff to actually understand how to deal with it? that remains

>> Now if they can actually have someone help you once the code is scanned.
Reply  |  Post Message  |  Messages List  |  Start a Board

Finally a good idea from MS. Now if they can actually have someone help you once the code is scanned. Otherwise it is just as useless as the lines of characters that appeared in earlier blue screens.
Reply  |  Post Message  |  Messages List  |  Start a Board
Editors' Choice
Hot Topics