50%
Tweet
Windows 8 has left a lot of folks fuming. Can Windows Blue win them back? 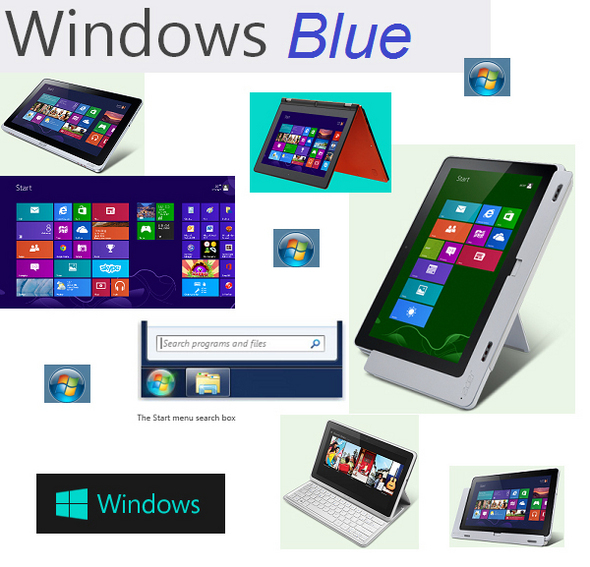 Microsoft has been busy lately defending Window 8's honor, and for good reason. The din of user gripes, focused mostly on the new operating system's tile-oriented Modern interface, hasn't lessened much since Windows 8 launched last October. Industry analysts have dumped on the new OS too, claiming it bears some of the blame for weak PC sales worldwide.

But is Windows 8 really so bad? This won't come as a surprise, but Microsoft thinks it's pretty good, if you'll just give it a chance. The company recently confirmed that its Windows 8 update, code-named "Windows Blue," is slated for release later this year. A public preview of Windows Blue will debut at the Microsoft Build Developer Conference in San Francisco at the end of June.

Redmond is a bit less forthcoming about Windows Blue's new and updated features, which is the subject of the slideshow that follows. So what can we expect? "[Blue is] an opportunity for us to respond to the customer feedback that we've been closely listening to since the launch of Windows 8 and Windows RT," said Tami Reller, chief marketing and financial officer of the Windows division, in a May 7th Q&A session with Microsoft's Brandon LeBlanc. Well, perhaps "feedback" is a friendly word for "grievances."

Whatever the case, we'll find out in a few weeks just how responsive Microsoft is to Windows 8's critics.

Microsoft claims it has sold more than 100 million licenses for Windows 8, up from 60 million in January, and that there are now more than 2,400 certified Windows 8- and Windows RT-certified devices. And Windows 8's acceptance in the marketplace, in terms of license sales, is on par with that of Windows 7 after its debut, the company says. But as InformationWeek associate editor Michael Endler makes clear, there are many more PCs in the world today than when Windows 7 arrived at the end of 2009. To match its predecessor's market share growth, Windows 8 would need to sell significantly more licenses than Windows 7.

So is Windows doomed? Hardly. Even with the anti-Windows 8 uproar, there's no indication that enterprises are ditching the Windows platform. However, given that many businesses are still in the process of upgrading to Windows 7, there's a good chance they may bypass Windows 8 -- and perhaps even Windows Blue -- altogether and hold out for Windows 9. Consumers, however, may find iPads and Android tablets tempting alternatives to Windows-based laptops and tablets, and that has Microsoft worried.

Here are 8 things that Microsoft might fix in Windows Blue.

Comment  |
Email This  |
Print  |
RSS
More Insights
Webcasts
5 Steps to Integrate SAST into the DevSecOps Pipeline
12 Ways to Defeat Multi-Factor Authentication and How To Stop the Bad Guys
More Webcasts
White Papers
NetFlow vs Packet Data
[Exclusive InformationWeek IT Trend Report] The Cloud Gets Ready for the 20's
More White Papers
Reports
Can You Spare 10-12 Mins to Help Us Out with a Survey on Tech Trends?
Got 7 Minutes? Dark Reading Needs Your Help With Our Survey on Incident Response
More Reports

I've been using Win 8 for some months now, with a start menu/button replacement program (Classic Start Menu). This works fine for me and otherwise win8 pro + media center for $40 was a reasonable deal for a pretty good product. As long as win8 can support apps for alternate start menus then I don't see an issue. I won't buy any more at the current selling price because my win 7 PCs are just fine as they are.

The credibility of this article was completely lost by this horrible Informationweek presentation/web site. No one talking about interfaces or user experience has any credibility when publishing on this site. Informationweek should get their own act together in an area before reviewing another company's product in that area.
Reply  |  Post Message  |  Messages List  |  Start a Board

I beleive you may have meant to use the word retraining and not retaining, it really drastically changes the context of the sentence, don't you think?! "many of which don't want the headaches and expense of retaining their employees to learn the Modern UI"
Reply  |  Post Message  |  Messages List  |  Start a Board

I am pretty sure you meant lower left corner instead of: "the Windows icon in the lower right corner of Windows 7"
Reply  |  Post Message  |  Messages List  |  Start a Board

Really? So make your case. Because "that's what users are used to" is about as terrible a design driver as there is. If that were always the highest priority design decision then nothing would EVER change.

Imagine if OS designers always regarded the users old OS habits as paramount? We wouldn't have UIs at all, we'd still be using command lines for everything because that's what users were used...until they got used to something else.

Now, I don't regard the hidden start button as revolutionary as a visual file system. But, it's absence is certainly not the catastrophe it's being made out to be, if not only b/c in its former conception, it never really worked all that well.

I would love to hear an argument for the old start button/menu on its merits. How is that actually better than the new way (other than that's what users are used to)?
Reply  |  Post Message  |  Messages List  |  Start a Board

Windows 8 is like a pimp trying to sell you stolen stereos while you are late for a meeting. You want it to get out of the way, but it won't, because it can't take it's mind off of your wallet.

Windows 8, and those ridiculous Live Tiles that Microsoft, in their word, planned to "monetize", will fail.
Reply  |  Post Message  |  Messages List  |  Start a Board

Start Menu is a must, especially if Microsoft wants a new version of Windows to be deployed on Corporate Desktops. Why? Because the last time there wasn't a Start Menu on a Corporate Desktop was, oh, the mid-90s. People have gotten used to how they access things, especially on systems that use a mouse/trackball/trackpad instead of touch. If all systems were suddenly endowed with a touchpad that allowed for full motion gestures, that would be a different story... perhaps Microsoft should revisit their roots and start packaging a touchpad with versions of Windows the same way that they packaged mice with Windows, way back in the day.

I tried to live with Windows 8 for a little while (couple of weeks) and the full screen IE was one of the few things about Win8 that I really liked. Everything else seemed to be a sidestep or a backwards move.

Sure, it's great to push the UI/UX paradigm, but it looks like Microsoft has proven once again that they're only going to "really get it right" with every other major release. For the sake of Windows Blue, I hope so.

Enough already with this stupid Start Button/Menu talk already. I've had it, not only because I disagree on its merits but the argument is so hollow but so loud that it is now iles past annoying. So let's get into it.

So you REALLY want the start button back? Why? Considering that the exact same function is served by a button only pixels away from where the start button use to be except that now it's not taking up space when it's serving absolutely no purpose at all. This makes NO sense. If you're so used to the button being there, just move the mouse a hair down and to the left and voila, Start button. Does seeing the button soothe you? The start button is still there, it just auto-hides now and that's the way it should be. If it's not adding value to me, it should disappear.

Now on to the start menu. This is a little trickier, but the result is the same. Two important things to note here, the Modern UI start screen does everything that the old start menu did, but WAY better, and you lose exactly nothing by taking up the whole screen rather than just the corner. Let's start with the latter.

When you used to click and bring up the old start menu, what was the value of having 80% of your desktop visible? Were you ever using the start menu AND your desktop at the same time? Could you even if you wanted to? And if you could, would it have done you any good? Probably not. So having it take up the whole screen so you can actually fit things on it makes sense.

And that leads to the next thing, did the start menu ever actually work as promised? Those frequently used apps NEVER EVER EVER EVER worked the way it was supposed to. It would randomly mix your most recently used apps with the ones it thought you might use more frequently if it kept putting it there. And then if you pinned them to the top, how many could you really fit, 7? 8? 10? Whatever it was, the modern UI bests that by multiples. From that screen you can get to any program, search anywhere, basically do everything that the star menu tried to do.

I guess IW thinks that we'll buy their advertisers' products if they shove the ads at us ten times rather than just one.
Reply  |  Post Message  |  Messages List  |  Start a Board