Apple has dealt Google another blow by announcing a new default Web search provider in its operating system: Bing.

Users traditionally searched with Spotlight by clicking the magnifying glass icon on their desktop to find files on their computer's hard drive. In Yosemite, users type on the desktop to search, no longer needing to click Spotlight's icon. Apple also extended Spotlight's search function to include both local files and the Internet results -- via Microsoft's searching engine, Bing.

The move from Google's search engine to Bing is significant. Before, if you wanted to search the Internet via Spotlight, Apple prompted you to open a new window in Safari, which defaulted to Google. When you search the Web via Spotlight in its new operating system, Apple will display search results from Bing instead.

This isn't Apple's first dig at Google. Last year, the company struck a deal with Microsoft to name Bing as the default search engine for questions that users asked Siri. 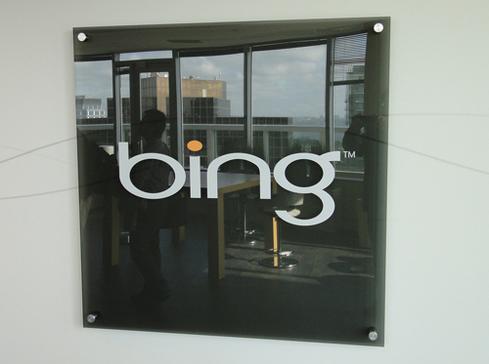 "Last year, Bing became the default Web search for Siri, and now will also be the default Web search provider in the redesigned Spotlight search feature for the next generation of iOS and OS X," a spokesperson for Microsoft said. "We're excited about extending the Bing platform to help iOS and Mac customers find what they need to get things done."

In addition to its switch to Bing, Apple announced it will add popular private search engine DuckDuckGo to its list of default search engines, which also include Google, Yahoo, and Bing.

"Safari now gives you more control over your privacy on the Web," Apple said in its announcement. "You can open one Safari window in Private Browsing mode […] while keeping others in regular browsing mode. You can also now search the Web using DuckDuckGo, a search engine that doesn't track you."

DuckDuckGo functions similarly to other popular search engines, with that one exception: It doesn't track cookies nor does it save your search history, making it a popular alternative to Google for users who are concerned about privacy. Last year, DuckDuckGo performed more than 1 billion searches.

Kristin Burnham currently serves as InformationWeek.com's Senior Editor, covering social media, social business, IT leadership and IT careers. Prior to joining InformationWeek in July 2013, she served in a number of roles at CIO magazine and CIO.com, most recently as senior ... View Full Bio
We welcome your comments on this topic on our social media channels, or [contact us directly] with questions about the site.
Comment  |
Email This  |
Print  |
RSS
More Insights
Webcasts
Building Asset Management into Your Enterprise Security Strategy
Managing a Hybrid Cloud Infrastructure
More Webcasts
White Papers
SANS Institute Survey: The State of Cloud Security
The 2021 Threat Hunting Report
More White Papers
Reports
Immuta Data Engineering Survey: 2021 Impact Report
Are We Cyber-Resilient? The Key Question Every Organization Must Answer
More Reports

@SaneIT, You're spot on. They're not getting rid of the Google option entirely, they're just making it more difficult to choose. And the rivalry continues...
Reply  |  Post Message  |  Messages List  |  Start a Board

Google continues to get under Apple's skin. But, to be fair, shouldn't Apple use the search engine favored by the most people as its default? I guess the enemy of my enemy really is my friend. Microsoft and Apple are getting too chummy. It's making me uncomfortable.
Reply  |  Post Message  |  Messages List  |  Start a Board

@Charlie: you can count me in among the "teeth-gnashers" on this one. seems to me the goal should be offering th best availsble services to your customers, not playing games of one-upsmanship with competitors.

Which leads me to wonder: What, in your view, has been the most egregious example of this type of competitive one-upsmanship among tech companies that has ended up being bad for customers?

The US mishmash of cellular systems in the early days of wireless and proprietarty handsets for each carrier is one of my favorite examples for having slowed down adoption of cellular and hampered quality of services in the U.S. compared to toher countries.

I use Bing for about 40% of my searches and it meets the Prairie Home Companion's standard of "pretty good." But Google still clearly has an edge in speed and quality of results on hot, new topics. So some Apple users are not only going to notice, they will gnash their teeth and think once again what life might be like outside the Apple reservation.
Reply  |  Post Message  |  Messages List  |  Start a Board

Will be interesting to see whether this backfires the way kicking Google Maps off the iPhone did, initially. My guess is no: for the functions where people would use the default search function (rather than taking a browser to google.com), Mac users are likely to find Bing meets their needs just as well.

As far as I can tell, Spotlight in OS X 10.9 doesn't have a way to set the Web search provider. Does this mean everyone who upgrades to 10.10 will get Bing? And if so, will Google be a non-default option?
Reply  |  Post Message  |  Messages List  |  Start a Board
InformationWeek Is Getting an Upgrade!