Google has only begun to solve problems getting client apps and Web apps to work together.

Google has developed dozens of Web apps--for documents, spreadsheets, messaging, and more--used by millions of people. It only makes sense that the company behind those apps is in the best position to tie them to netbooks and PCs. Google has the APIs, the know-how, and the experience--in client code with Google Gears, and in operating systems with the smartphone-oriented Android.

That doesn't mean Chrome OS is a guaranteed success. There's still a lot we don't know about it, including whether it will ever come with enterprise-class management capabilities and support. But Google is ideally positioned to create a better user experience in a software environment it manages and controls.

It's safe to assume that Chrome OS will excel in handling apps developed by Google; the real question is how well it will handle software developed by others, including developers who build apps on Google's own infrastructure using its App Engine tools. Google's promise: "All Web-based applications will automatically work."

But it won't be that easy. As shown by the nuts-and-bolts discussion at Google I/O, the company's annual developer's conference held just two months ago, deep programming work is sometimes required, and Google has only begun to solve many of the problems associated with getting client apps and Web apps to work together and behave consistently. "There's a broad category of things that native apps can do that Web apps can't do," Google engineering director Matthew Papakipos said in a session on HTML 5.

Among the technologies being brought to bear by Google to meld Web apps and PC performance are HTML 5, the WebKit browser engine, the V8 JavaScript engine, and Native Client, Google's nascent open source technology for running native code (code written for a specific hardware platform) in Web apps. 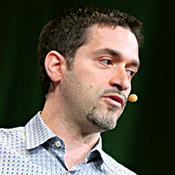 Papakipos weighs native versus Web
Chrome OS is being designed first and foremost with Web software in mind. Look no further than the Chrome OS interface--Google's Chrome browser--for evidence. Google describes Chrome OS as an extension of the Chrome browser, not vice versa. Giving the browser a leading role demonstrates that, for Google, the Web experience trumps the underlying computer system. Yet the hard work it's doing to meld client and Web performance shows that a "cloud OS" will still depend on powerful client computing.

Papakipos and Chen spoke prior to Google's announcement of the Chrome OS, but their presentations and others at Google I/O reveal some of the challenges and opportunities that Google faces in developing a cloud OS. The browser has simplified the way that applications are accessed, but there's still engineering complexity in bridging Web software and device hardware. The cloud OS must still manage device resources, networking, security, files, the user interface, and applications.

Seeking a Competitive Edge vs. Chasing Savings in the Cloud Joao-Pierre S. Ruth, Senior Writer,  7/19/2021
White Papers
Understanding the Most Common Lateral Movement Attack Tactics
Questions to Ask in Evaluating a Deception-Based Cybersecurity Solution
Adaptive Multi-Layered Defense Is the Key to Cyber-Resiliency
Powering Digital Transformation
The Top 10 Threats of Data Sprawl and How to Mitigate Them