50%
Tweet
Microsoft releases arcade-style game in lighthearted attempt to discourage use of outdated operating system. Can you beat the blue screen of death?

Though built for Internet Explorer 11, the game should run in any modern browser. Escape from Windows XP pokes fun at its namesake OS in a number of ways. Before playing, the user must patiently wait as a virtual XP system completes its start-up routine, only to be interrupted by a scrambled "blue screen of death" after reaching the desktop.

From there, the game presents a fairly amusing account of XP's longevity. Highlights include the OS's Phoenix-like rise "from the ashes of Windows 2000," its refusal to die in the wake of newer technologies, and its ultimate transformation into a "pestilence on the peaceful developer community." Once the prologue finishes, users take control of the hero and set out to rid the world of XP once and for all.

Although the game might ruffle the feathers of XP diehards, Microsoft ostensibly hopes to demonstrate some of the technologies that users of newer systems enjoy. Browser-based gaming wasn't a part of the landscape when Internet Explorer 6 ruled the day, but as Escape from Windows XP attests, modern browsers support a much broader range of capabilities. If XP users are willing step away from IE, other contemporary browsers are available. Google has pledged to support Chrome for XP until 2015, for example. 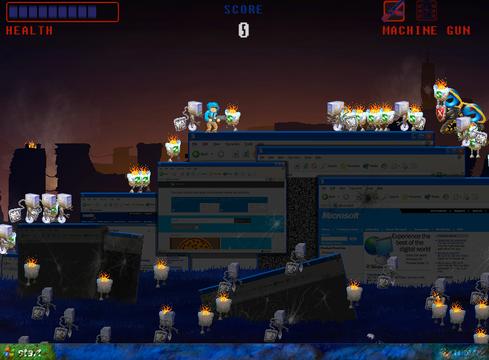 The game's post-apocalyptic landscape is littered with XP references.

In related news, Windows XP's support termination helped curb falling PC shipments, according to new figures from the research firm Gartner. PC shipments totaled 76.6 million units in the first quarter of 2014. That tally represents a 1.7% decline compared to the same period in 2013 but was better than recent quarters, many of which included double-digit percentage drops.

Though an improvement, the PC declines also attest to the industry's ongoing challenges. In the first quarter of 2013, the PC slump was in full swing. The most recent quarter declined relative to even this weak baseline, showing how far PC sales have fallen since their heyday.

With mobile devices taking over common computing tasks and PC refresh cycles stretching longer than they used to, the industry probably won't bounce back to its former heights. But with Microsoft's XP deadline forcing some customers into action, the first quarter showed that people still need traditional PCs. Gartner noted especially strong demand in Japan, and improvements throughout Europe, the Middle East, and Africa. Commercial shipments were also up in the US, where Gartner said the impact of tablets has faded. 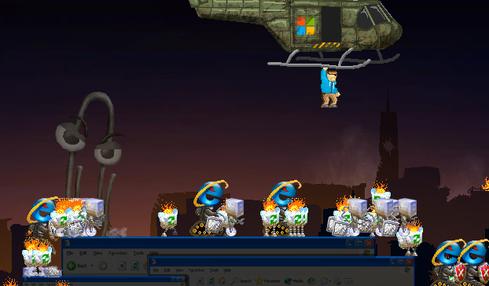 Clippy cameos in Escape from Windows XP as a rampaging, Godzilla-style villain.

It remains to be seen if "Escape from Windows XP" motivates any holdouts who aren't among the new PC buyers implied by Gartner's numbers. It's also unclear if XP's much-discussed security vulnerabilities actually cause widespread problems. But on the security front, a Microsoft rep said this week that at least one alleged vulnerability has been overhyped: ATM machines.

In an interview, director of communications Tom Murphy said Microsoft has been working with banks for years to ensure ATMs remain safe, and that XP's retirement isn't grounds for changing one's banking habits. He'll continue to use ATMs, he said.

He confirmed that although some ATMs run the still-supported Windows Embedded SP3, others run Windows XP Pro Embedded, which lost support this week alongside the mainstream XP versions. Murphy said not all banks and ATM operators have updated their machines, but that those still using XP are paying for additional Microsoft support or taking other proactive steps. "With banks, trust and security is front and center. ATMs are something they put a lot of thought and investment into," he said.

Michael Endler joined InformationWeek as an associate editor in 2012. He previously worked in talent representation in the entertainment industry, as a freelance copywriter and photojournalist, and as a teacher. Michael earned a BA in English from Stanford University in 2005 ... View Full Bio
We welcome your comments on this topic on our social media channels, or [contact us directly] with questions about the site.
Comment  |
Email This  |
Print  |
RSS
More Insights
Webcasts
Cyber Attack Evasion Techniques
Shifting Security from Speedbump to Digital Accelerator
More Webcasts
White Papers
Let's Talk: Why Language Matters in Cybersecurity
How Enterprises Are Developing and Maintaining Secure Applications
More White Papers
Reports
Assessing Cybersecurity Risk in Today's Enterprise
The Definitive Guide to Managed Detection and Response (MDR)
More Reports

The primary responsibility of a bank is to provide security, security is the core service that banks offer -- gold smiths did the same to become traditional banks and traditional banks did the same to become electronic banks. Hence, a bank can even ramp up win98 to meet the security needs of ATMs or they can even build a custom OS for ATMs, users on the other hand need to let go, there isn't any other way.
Reply  |  Post Message  |  Messages List  |  Start a Board
Editors' Choice
Hot Topics