While Microsoft is positioning Cortana as a digital assistant, it could also filter search results to Bing, giving Redmond a new edge against Google in the lucrative search market.

What Cortana, the voice-activated assistant, will mean for Windows 10 and the upcoming Windows 10 Mobile is becoming clearer as Microsoft's readies its new operating system for its July 29 worldwide launch.

Microsoft announced in a May blog that the company was porting Cortana to Apple's iOS and Google's Android mobile operating systems, ostensibly to give users of Windows 10 desktops different choices in their mobile device usage.

However, that porting to iOS and Android is limited in the depth of its integration.

As Microsoft admitted in the blog, "The ability to invoke Cortana hands-free by saying 'Hey Cortana' requires special integration with the device's microphone, so that feature will be limited to Windows Phones and PCs."

Any users of Nokia phones will have to say it backwards in Finnish.

So, how exactly Cortina will be invoked from non-Windows smartphones remains to be seen. 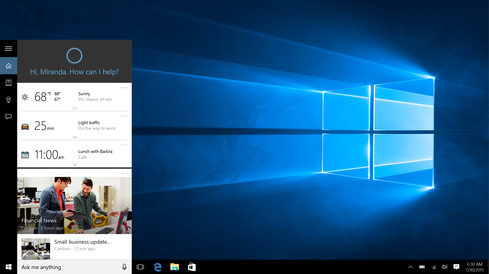 But what has spiced up the speculation recently is the leak of a page on the Parallels' website (since deleted). The page said that with the upcoming version of Parallels' virtual machine software for Mac OS X -- Parallels 11 -- users would be able to say the "Hey Cortana" alert at any time, as long as Windows 10 is running in the background.

This is much more convenient than the current Parallels 10 VM software that also promises support for Windows 10, but requires it to be the foreground application in order to invoke Cortana.

While Siri -- Apple's in-phone assistant -- uses software from Wolfram Research to generate results, Cortana will use Bing. Since Microsoft controls the Bing engine, one is left to wonder just what it might do with all the queries that Cortana will be sending to it, due to its integration in Windows 10.

The oil derrick that pumps out money in the basement of Google runs on search queries. It may well be that Microsoft has noted this in its quest for survival and relevancy, and is covetous of that sort of money.

[Read how Microsoft is attempting a SaaS model with Windows 10.]

In order to make advertisers pay for Bing query information, Microsoft needs to have huge numbers of queries flowing into Bing.

Now, if it has Cortana up and running, usable on both of the major PC platforms -- as well as all kinds of mobile devices -- might that deployment be able to deliver the amount of queries it would need to make a real business out of Web searches?

Microsoft and its Bing search engine have held a steady place in the online search market for some time, but the company has yet to make any real headway against Google. Microsoft's partner in all this, Yahoo, is starting to test whether Google search results could work on its Web sites.

Together, Microsoft and Yahoo own about 6.5% of the $81 billion global search market. Google owns a healthier 54% of the market all by itself, according to a 2015 forecast by eMarketer. With its partner straying, Microsoft might be looking for something else, and Cortana might be it.

Google: Is it time to start looking over your shoulder? Redmond is coming.

Larry Loeb has written for many of the last century's major "dead tree" computer magazines, having been, among other things, a consulting editor for BYTE magazine and senior editor for the launch of WebWeek. He has written a book on the Secure Electronic Transaction Internet ... View Full Bio
We welcome your comments on this topic on our social media channels, or [contact us directly] with questions about the site.
Comment  |
Email This  |
Print  |
RSS
More Insights
Webcasts
Optimizing App Performance in the Cloud
Nip Ransomware in the FUD: Detecting Attacks Pre-Encryption
More Webcasts
White Papers
Why Add Security to Your Skill Set and How to Do It
Sunburst: Impact and Timeline
More White Papers
Reports
How Data Breaches Affect the Enterprise (2020)
The State of Cloud Computing - Fall 2020
More Reports

Siri & Cortana, et al. can all go pound sand as far I'm concerned.  I refuse to use search engines that turn over data to the NSA by default.  Use DuckDuckGo, instead.  The search engine that doesn't track you or turn you into a criminal based on what you search for.
Reply  |  Post Message  |  Messages List  |  Start a Board
Editors' Choice
Hot Topics