Apple debuted macOS Sierra at WWDC 2016, along with the developer preview. Here's a look at the features you can expect to see in the company's latest desktop OS.

Apple unveiled a series of software updates to the Mac, iPhone, Apple Watch, and Apple TV June 13 at its Worldwide Developers Conference (WWDC).

One of many changes announced at the event was the renaming of Apple's desktop operating system. Cupertino decided to ditch the OS X moniker in favor of macOS to more closely align with the names of its other operating systems -- iOS, watchOS, and tvOS.

The developer preview for the latest version of its desktop OS, called macOS Sierra, was made available the same day the new operating system was announced at WWDC. A public preview is expected to launch in July, and Apple says it will make the update generally available for free to Mac users later in 2016.

The new name was the first of many desktop changes announced at WWDC. Apple demoed a series of new features and fixes intended to improve storage management and continuity between Mac and iPhone.

Shortly after Microsoft integrated Cortana into Windows 10, Apple brought Siri to the Mac desktop. The personal digital assistant is activated by a keyboard command (Fn+Space). It can find files, message contacts, or research info on news, weather, or restaurants.

You can drag information from Siri into a desktop window. For example, you can pull data from the web into Pages. Search results like sports schedules and Twitter feeds can be pinned into the Notification Center for easy access.

Users will find interacting with Siri on the Mac is similar to interacting with Siri on the iPhone, but the similarity isn't always a good thing, as pointed out by The Verge. You can't type questions to Siri. You can only ask via voice, which might be annoying in public places. Siri also doesn't integrate with Spotlight, even though they perform similar search functions.

The idea is to make all of your folders accessible across devices -- not only the ones you store in iCloud. While useful, the automatic upload of content to the cloud may cost you, since users are limited to 5GB free storage.

Apple designed macOS Sierra to maximize storage space. A new Storage Optimization feature takes files you don't use often and brings them to the cloud. There, they are available to download on demand. 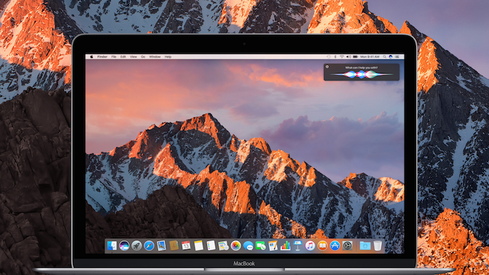 There are other features to maximize free space. If you download a file on Safari that you've already downloaded, the OS will delete the original file instead of saving the second with a (1) at the end of the name. If macOS notices you're low on space, it will delete all partial downloads, log files, and caches, according to Ars Technica.

Several updates in macOS Sierra improve the connection among Apple devices. For example, you can use Apple Watch to unlock your Mac. You can also copy and paste content between Mac and iOS devices. If you copy anything on one device, it is available to paste on another.

Apple Pay can be used from inside Safari. Payments are finalized by double-clicking the side button on Apple Watch or by using the iPhone's fingerprint sensor.

A Photos feature called Memories will automatically sort your photo stream into albums by using dates, geolocation, and computer vision, reported TechCrunch. Photos will also show you all people in the album and a map. You can also use the app to search for objects and people.

Apple is also updating macOS with Picture in Picture, a feature it brought to the iPad last year. This feature lets you shrink down a video window and move it around on the desktop. It makes it easier to keep watching a video while multitasking.

Kelly Sheridan is the Staff Editor at Dark Reading, where she focuses on cybersecurity news and analysis. She is a business technology journalist who previously reported for InformationWeek, where she covered Microsoft, and Insurance & Technology, where she covered financial ... View Full Bio
We welcome your comments on this topic on our social media channels, or [contact us directly] with questions about the site.
Comment  |
Email This  |
Print  |
RSS
More Insights
Webcasts
Bolstering Your Enterprise Cyber Risk Assessment
4 Practical Tips for Building a Data Lake
More Webcasts
White Papers
Intelligent Load Management
The State of Zero-trust Security Strategies
More White Papers
Reports
Future Proofing Your Network for 5G
Enabling Enterprise Resiliency Through Cyberthreat Detection
More Reports