In a move to bring more Surface Pro tablets into the enterprise, Microsoft is teaming up with hardware partners Dell and HP.

In an attempt to steal some of spotlight away from Apple's expected announcement of a larger iPad Pro tablet on Sept. 9, Microsoft announced this week that it is partnering with Dell to sell its Surface Pro tablets to the enterprise market.

In the Sept. 8 announcement, Microsoft CEO Satya Nadella noted, "Today’s expanded partnership with Dell represents a bold step forward as we marry amazing devices, such as Surface Pro, with enterprise-class service and support." 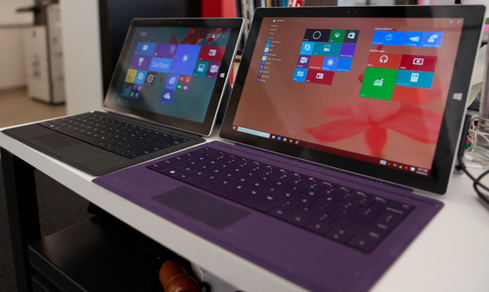 Dell already has relationships with many different enterprises, whether through direct sales or IT services. In addition, the Microsoft agreement gives Dell the ability to upsell businesses with different services.

"Surface Pro devices sold through Dell will include the option of Dell Services, including Dell Hardware Warranty, ProSupport with Accidental Damage Service, and Configuration and Deployment Services," according to Microsoft.

Dell seemed a bit giddy about all of this.

In its announcement of the deal, Dell noted:

Beginning early October 2015, we will be selling Microsoft Surface Pro and Surface Pro accessories through our North America sales organization, and rolling out to other regions starting in early 2016. No other PC maker is doing anything like this with Microsoft.

Well, not quite true.

HP was also included in this Surface Enterprise Initiative effort.

We are excited to announce that as part of the Surface Enterprise Initiative with Microsoft, we will be offering the Surface Pro 3 through the HP direct sales force. Independently, we will also be offering a new set of HP Care Packs designed specifically to help customers to plan, configure, deploy and manage in enterprise environments. We also plan to offer some mobility workflow transformation tools and services that will be available next year.

So, HP sees this as another platform for it to leverage its own portfolio of service plans. HP, as well as Dell, has its own hardware to sell, but the company seems to be responding to perceived desires within the enterprise market for a one-stop solution that provides hardware and the support for that hardware on one purchase order.

[Check out our comparison of Microsoft's Surface 3 and Surface Pro 3.]

There was also a third component of Microsoft's business push, one that looks to get Windows 10 into the hands of more business buyers.

Microsoft announced that Accenture and Avanade have also been named part of the same initiative. Neither company will be reselling Surface hardware, but the Avanade joint venture with Microsoft has built apps for Windows enterprise customers.

The Surface Enterprise Initiative is a way for Microsoft to make up with its own customers for its past actions in creating hardware in the first place. At the time, the company was seen as alienating those who provided Microsoft with much revenue by loading its software onto their hardware.

This initiative gives space to Dell and HP to leverage their existing enterprise relationships into purchases that involve more than anything Microsoft can provide by itself.

Larry Loeb has written for many of the last century's major "dead tree" computer magazines, having been, among other things, a consulting editor for BYTE magazine and senior editor for the launch of WebWeek. He has written a book on the Secure Electronic Transaction Internet ... View Full Bio
We welcome your comments on this topic on our social media channels, or [contact us directly] with questions about the site.
Comment  |
Email This  |
Print  |
RSS
More Insights
Webcasts
Detecting and Preventing Insider Data Leaks
Hybrid Cloud: The Great Balancing Act
More Webcasts
White Papers
The State of Endpoint Security
Accelerate Threat Resolutions with DNS
More White Papers
Reports
Gartner Market Guide for Insider Risk Management Solutions
Trustwave Global Security Report
More Reports
Copyright © 2021 UBM Electronics, A UBM company, All rights reserved. Privacy Policy | Terms of Service