Microsoft launched some impressive Windows 10 hardware, but the smartphone remains a weak link for the tech giant.

Microsoft turned heads with the surprise release of its Surface Book at a Windows 10 hardware launch earlier this week. The laptop was the last in a series of new products that included the Lumia 950, Lumia 950 XL, Surface Pro 4, and Microsoft Band.

The debut of Surface Book was equal parts obvious and puzzling. While a clear next step for Microsoft's mobile hardware, especially given its enterprise audience, the Book contradicts the idea behind its Surface line -- to replace the laptop.

To Gartner analyst Michael Silver, it "makes sense" for Microsoft to fill out its product line with a more traditional notebook. The Surface Pro 4 is a powerful upgrade, but it's unlikely to appeal to those who didn't also like the Surface Pro 3.

For Microsoft, which is still working to establish itself as a hardware supplier, the challenge was adding a new edge to the portable computer. A traditional clamshell laptop wouldn't have been enough, said Silver.

"They were looking for something distinctive," he explained. "[Microsoft] needed to be a little more over the top."

The capabilities of Surface Book may give it an edge over Apple's MacBook Pro. "I don't think anyone has cracked the Apple status symbol at this point."

Microsoft did not specify whether the Book targets consumers or the enterprise, but he believes it's positioned more towards business users. There are a few specific features that will "get people asking" about Microsoft's laptop, he continued.

One example is the Surface Pen, which has been upgraded to deliver more pressure. The pen can be stored on a magnetic strip alongside the display. It's already a regular tool for half of Surface Pro 3 users, said Silver citing the day's keynote, and makes the digital stylus a selling point for Microsoft.

Could Surface Book help Microsoft boost its PC growth? The PC market is sluggish, and will continue to be "relatively flat" into next year, he said. Windows 10, which can be downloaded on older devices, hasn't done much to drive sales. 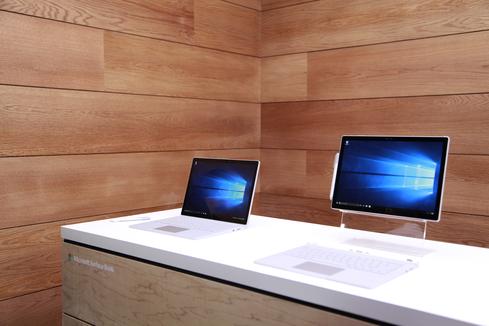 Surface Book could drive Redmond's success in the PC space as people get used to hybrid devices, but the smartphone sector remains a sore spot.

"[Microsoft] wants to build an end-to-end experience, and the phone is a critical piece," Silver explained.

Mobile success will prove an uphill battle, since Microsoft has only managed to capture 3% of the smartphone market with Windows Phone. Specs for the new Lumias are impressive. Their hardware is comparable to iOS and Android competitors.

However, a poor app selection and a weak retail strategy could cause both to fail. We will see if the Windows 10 Mobile experience will be sufficiently powerful to drive enterprise and consumer adoption.

"Microsoft has to prove itself with experiences," said Silver. "If they provide the end-to-end experience, it gives them a foothold for the future."

Kelly Sheridan is the Staff Editor at Dark Reading, where she focuses on cybersecurity news and analysis. She is a business technology journalist who previously reported for InformationWeek, where she covered Microsoft, and Insurance & Technology, where she covered financial ... View Full Bio
We welcome your comments on this topic on our social media channels, or [contact us directly] with questions about the site.
Comment  |
Email This  |
Print  |
RSS
More Insights
Webcasts
Unifying Your Endpoint Security Strategy
Using Cyber Underground & Blockchain Intel to Stop Cyber Attacks
More Webcasts
White Papers
Incident Readiness and Building Response Playbook
Privileged Access Management Checklist
More White Papers
Reports
Defending Against Critical Threats
A Practical Guide to Enabling 5G Deployments
More Reports