Microsoft-Nokia Deal On: What's Next? - InformationWeek

50%
Tweet
Nokia shareholders have officially agreed to sell the company's device business to Microsoft. How much will Microsoft gain?

Nokia shareholders on Tuesday approved the sale of the company's device business to Microsoft. The deal, worth $7.2 billion, calls for the Finnish company to be absorbed into Microsoft by early next year.

Observers are more likely to be interested in what happens after that. Ever since the acquisition was announced in early September, Nokia CEO Stephen Elop -- a former Microsoft employee -- has been rumored as a leading candidate for outgoing Microsoft CEO Steve Ballmer's job. Some have questioned whether he can handle the Herculean task of shepherding Nokia's device business into Microsoft while also taking over for Ballmer.

But even if Microsoft's selection committee opts for someone other than Elop, the purchase will continue to attract attention and commentary into 2014. The acquisition made clear that even without Ballmer, Microsoft will remain committed to mobile devices and operating systems. Largely on the strength of recent Nokia Lumia handsets, the Windows Phone platform has established itself as a solid third option behind Android and iOS, and is even challenging Apple's iPhone in some markets.

Still, it's one thing for Microsoft to buy Nokia's patents, brands, and manufacturing expertise. It's another to put these assets to work within the larger Microsoft stable. And even if Windows Phone is on the rise, it's fighting for table scraps: With the edge in premium, high-margin devices, Apple and Samsung account for literally all of the industry's profits.

Almost 80% of Nokia's shareholders participated in the vote to approve the deal, according to the Financial Times, with 99.7% indicating approval. Ballmer said shortly after the deal was announced that Finnish Nokia employees would not be transferred. Rather, they'll form a new smartphone R&D center.

Though announced in September, the deal had been brewing since February, when Ballmer tested the waters with Nokia leaders at Mobile World Congress in Barcelona. According to various reports, more than 50 additional meetings followed before the terms were hammered out.

Those terms give Microsoft the right to license Nokia patents for the next 10 years, as well as the rights to the Lumia and Asha brands. Nokia retains its networking and services business, as well as its Here mapping unit, among other assets. The deal prohibits Nokia from reentering the smartphone device market before 2016.

It not clear whether Microsoft will assimilate Nokia's business under its Surface banner, or if it will position Lumia smartphones as a separate brand. Some analysts have speculated Microsoft might keep the Lumia label in regions where Nokia's name recognition is strong, while using its own branding elsewhere.

Regardless of what it calls its upcoming smartphones, Microsoft will also have to enhance the Windows Phone platform's overall profile. Windows Phone 8.1 is expected early next year, with rumored enhancements that range from a notification center to a Siri-like digital assistant. Also, the Verge, citing inside sources, reported in September that Microsoft will merge its Windows 8 and Windows Phone app stores. These moves could help, but it's not known whether they'll enable Microsoft to surge ahead, or merely to keep pace. 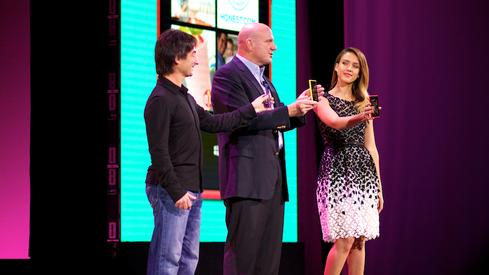 Windows Phone 8 launched with a celebrity ad campaign, but that hasn't stopped most users and OEMs from focusing on Android.

Microsoft also faces a lack of OEM support for Windows Phone. Indeed, the Nokia acquisition makes sense largely because other manufacturers' interest in Windows Phone has waned. ZTE recently said it will release Windows Phone 8 handsets next year, and the Nokia deal somewhat insulates Microsoft from a lack of Windows Phone support. But Microsoft still needs more committed partners. Given that Android can be licensed for free and still has far, far more users, Microsoft is operating with less leverage than it is typically accustomed to.

The Nokia buy's impact on Microsoft's tablet efforts is another unknown. In terms of features and cost, Nokia's Lumia 2520 tablet, which will go on sale Friday, largely overlaps with Microsoft's Surface tablets, for example. It's not clear how Microsoft will differentiate such broadly similar products.

To some, the Lumia 2520 has an early edge because it will launch with LTE support, but Microsoft has promised to launch an LTE-equipped Surface 2 in 2014. As this dilemma illustrates, Microsoft gains resources and capabilities with Nokia, but without the right strategy, the company's mobile efforts still face an uphill battle.

We welcome your comments on this topic on our social media channels, or [contact us directly] with questions about the site.
Comment  |
Email This  |
Print  |
RSS
More Insights
Webcasts
Deception: The Next Step In Cyber Defense
Network Security: The Attacker's Point of View
More Webcasts
White Papers
2020 Gartner Market Guide for Network Detection & Response
How You Can Evaluate Your Org's Cybersecurity Readiness
More White Papers
Reports
Special Report: Understanding Your Cyber Attackers
Making the Financial Case for Outsourcing Endpoint Protection
More Reports

I am finding two points extremely interesting here, one that has linked Microsoft's dominates with gamers, as PCs have stood the test of time even when up against a dedicated gaming console, and the second that even if Microsoft manages to capture the mobile market (the consumer mobile market) then one-thirds to half is the best that Microsoft can expect, I am guessing this is because of the giant Google-Samsung combo that has 81.9 percent of the OS market and 25.7 percent of the hardware market which will not be going away anything soon.

If Nokia's CEO Stephen Elop becomes the next CEO of Microsoft then I will view the development as a clear intent by Microsoft that with-in three years it wants to be at-least one-third of the market.
Reply  |  Post Message  |  Messages List  |  Start a Board

> Remember, Microsoft didn't start the mouse market, but it dominated it.

That's an interesting case. As I recall, Apple more or less handed the market to Microsoft by refusing to sell a mouse with two buttons. It then made matters worse by releasing that unusable circular mouse with the early iMacs. Given that gamers drove consumer hardware upgrades in the '90s and gamers wanted mice with two (or more) buttons, and given Steve Jobs's aversion to games at the time, it's not surprising Microsoft owned the mouse market.

I don't doubt that Microsoft can stabilize its situation and rebuild with a stronger hold on the mobile market, but playing defense and circling its wagons to create a Windows ecosystem that spans devices will make its recovery a long one. I'm hoping Microsoft will do something bold to change the dynamics of the technology market, because having Apple, Google, and Microsoft using the same playbook promises a dull decade to come.
Reply  |  Post Message  |  Messages List  |  Start a Board

Tom: I think Microsoft it playing the long game here, something it has done well before when it followed Apple into the Windows market.  Remember, Microsoft didn't start the mouse market, but it dominated it. The performance of the Nokia phone until now has been a good test, but just a hint of what might be possible when Microsoft puts its full heft behind the venture.

I do not expect a closed market -- Microsoft has always believed in an open market. (It made Office for Mac, and even bailed out Apple back in '97.) Instead, I think it wants to set the standard for those who license Windows for phones.  (The Surface does that for tablets, but there are other Windows tablets, including some nifty new ones just in time for the holidays.)  If no others measure up, then Microsoft will dominate, but I think it would prefer to see other players compete in hardware -- just as it has always done.

The question for me is not whether Windows phones will capture more than one-third of the market, it's how long Microsoft plans to take in achieving that goal.  What do others think?
Reply  |  Post Message  |  Messages List  |  Start a Board

Will Microsoft do something other than what Apple and Google have already done to compete? If the company just sticks with replicating Apple's closed ecosystem under the Windows banner, it's going to continue to find it difficult to turn things around.
Reply  |  Post Message  |  Messages List  |  Start a Board
Editors' Choice
Hot Topics