Microsoft Should Get Out Of The Device Business - InformationWeek

Microsoft must get over Apple envy and play in the real world of mobile. First step: Unchain Microsoft software from Windows.

Microsoft Surface: 10 Best And Worst Changes
(click image for larger view)
Is Apple envy getting the best of Microsoft? Over the past year, the software giant has burned partner bridges so that it could follow the Apple model of controlling the whole product.

But Microsoft's dusty inventory of Surface devices shows how difficult the integrated hardware-software market can be, as computing shifts from being device-centric to being centered on software, data, services and user experience.

Unfortunately, the alternative for Microsoft in mobile is equally hazardous: Keep relying on OEMs seduced by the popular and free Android. It's not as if Samsung and HTC are clamoring to pay a Windows license fee so they can make mobile devices most people don't want.

Steve Ballmer's successor will have to decide whether to stick with the "devices and services" model Ballmer set up just before announcing his retirement. Don't expect much to change. Microsoft isn't about to bring in a cowboy that will abandon the company's new business model and its $7.2 billion acquisition of Nokia.

However, with Windows revenue falling and Windows Phone a distant third behind Android and iOS, with roughly 3% of smartphone sales, can this hardware quest possibly end well?

Commodization Of PCs And Tablets

The PC market has been on a downturn since the iPad was introduced in 2010. Research firm IDC predicts that PC shipments will shrink by 9.7% year-over-year in 2013 and that tablet sales will surpass PC sales for good in 2015.

Microsoft's Windows 8 Surface ultrabook-tablet hybrid devices are an attempt to assert some control over the diminishing PC market while establishing the company as a tablet player … all with the same device! Surface RT, Surface Pro and Windows 8 all landed with a thud this year despite sincere efforts to create a unique hardware and user interface experience. Surface devices account for just 3.7% of tablet sales, according to IDC. Surface 2 devices, announced last week, offer hardware improvements such as an adjustable kickstand and a touch cover keypad that enhances battery life, as well as 200 GB of free SkyDrive storage. 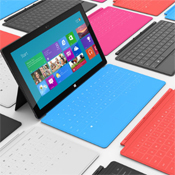 Out of the gates, the Surface 2 device (the ARM-based, cheaper, more "tablety" Surface that runs Windows RT) scored big when Delta announced that Surface 2 tablets will replace paper document flight bags for 11,000 pilots; this would normally be a job for iPads and is an indication of enterprise opportunities for Surface and Windows 8.

But down here on earth, Surface prices are still unrealistically high given the lack of demand from consumers and businesses (the 64-GB Surface Pro 2 is $900 and the 32-GB Surface 2 is $450).

Microsoft positioned Surface to inspire PC makers to improve ultrabook hardware. But that market is contracting, and inspiration is in short supply. As such, ultrabooks keep getting cheaper, thanks to more consumers buying inexpensive tablets for light computing tasks.

Both Surfaces offered the tablet-loving public more than it needed. The Surface Pro's 10.6-inch screen is too big, the price too high, the battery life too short and the selection of apps too scant to be considered a tablet, as the market has been defined by the iPad, iPad Mini, Samsung Galaxy Tab, Google Nexus and Amazon Kindle Fire. Consumers were also thoroughly confused by Surface Pro's operating system, Windows 8.

These days, being a laptop/tablet hardware maker is an uphill climb if you can't reap profits from the software and services inside. And so far, the embattled Windows 8 isn't providing the app and ecosystem perks Microsoft needs to lock itself into a hardware-software package.

It doesn't help that Windows 8 is a steaming pile of fail. If MS would continue to support the last stable OS instead of forcing XP users to upgrade at gun point, then its PC market may not be suffering. Of course, in the quest for ever larger profit margins, stability is routinely sacrificed.
Reply  |  Post Message  |  Messages List  |  Start a Board

Don't forget additional layer of consumer confusion induced by Surface RT/Surface Pro, that has now been GREATLY exacerbated by the new names Surface 2 and Surface 2 Pro, as if these latter two are a compatible family with the junior member being slightly slower but otherwise the same.
Reply  |  Post Message  |  Messages List  |  Start a Board

Not to worry. At the rate they're going, they're going to be out of the device business pretty soon whether they want to or not
Reply  |  Post Message  |  Messages List  |  Start a Board

Microsoft used to have good relations with Telcos (Verizon, ATT, etc) whose technology back end is Unix/Linux based. People and Companies don't buy Phones, they buy wireless services from the Telcos who offer discounted communications products i.e. phones. Few people and companies pay full retail.
Microsoft refuses to build a Hardware Abstraction Layer for devices, the only one that Microsoft built and maintains is x86. AMD wrote the x64 HAL. Other Windows CPU architectures died because those CPU makers failed to maintain a HAL for Windows. Microsoft has refused to build a HAL for ARM or MIPS et al.However Google does write a HAL for Android.

Android is also provided as a free OS. Note Engadget (etc) shows iPhone parts as 1/10th iPhone price (assume Chinese manufacturing is negligible cost), but Microsoft instead of subsidizing its OS is charging $40-60 per unit. Not something Samsung et al will accede to.
Reply  |  Post Message  |  Messages List  |  Start a Board

In the past Microsoft has created hardware to bolster its software business, example being MS Mouse, Natural Keyboard and Windows Sound System. When MS forked the NT5 code to Xbox, the purpose was to bolster DirectX for Gaming; but with massive cash support it is now a juggernaut of its own. Surface and Windows Phone are attempts to increase market share of mobile (Note Windows CE had a respectable market share before Android and iPhone). Ballmer was a marketing VP at Pepsi; mimes the Dilbert cartoon about overcoming product failure with Marketing. Microsoft did not back this play with cash or time (how many years for Xbox?). And were any previously successful Microsoft devices marketed by poor quality TV ads. Have any Microsoft TV ads been memorable except for their Failure? Apple iPod/iPhone commercials came on after they hit market saturation. Their initial success was through person-to-person (not online) buzz.
Reply  |  Post Message  |  Messages List  |  Start a Board

I appreciate information from people who have used the Surface Pro. For whatever reason, it seems folks who love other tablets are using social media and fun apps rather than dealing with complex Excel spreadsheets, database development, and WordPerfect (yes, I hate Word and love WordPerfect because it gives me absolute control over documents because it always has given you access to code much like html only before there was html).

Regarding music and photos and books and the cloud and social network sites, yeah I do some of that. But I also like to be effectively productive so I won't do Twitter, texting, or any other thing that allows anyone to interrupt my train of thought anytime and everyplace I am. When did we become a nation of people that like being interrupted while working or talking with someone in front of you or at dinner or....?

I simply don't buy the idea Steve Jobs made our lives better in a way that allows us to make better choices and more productive human beings.
Reply  |  Post Message  |  Messages List  |  Start a Board

I love my Surface Pro. It has replaced my laptop and is much easier to carry around and use while I am moving around. The laptop could never do that, but the surface does everything my lap top could do.
Reply  |  Post Message  |  Messages List  |  Start a Board

You say Microsoft should get out of the Device business, but it was their "Device Partners" that forced them in. Until Microsoft produced the Surface and worked with Nokia to produce the new Windows phones, the Hardware companies were producing poorly designed hardware for windows tablets and phones, that no one wanted to buy. Their Device Partners were killing Microsoft. Bill Gates envisioned the Tablet (Slate) long ago, but couldn't get cooperation. Apple took his Idea and because they produce the hardware and OS, they could produce a quality product people would buy.
Now with the Surface Microsoft raised the ante, and their device partners have stepped up and produced much better devices, that is starting (yes, just Starting) to generate interest. They lost a lot of ground waiting for their device partners to step up, don't expect people to flock back to them immediately. That is going to take time, years, not days or weeks, or even months. YEARS to repair the damage done.
Their "Loyal Device Partners" flocked to Android, leaving Microsoft to writhe in pain and slowly begin to die. Microsoft was FORCED to get into the device business, and if they get out they are committing suicide. They are positioning themselves to drive not only the software, but the hardware innovation as well. Everyone wins. Their is plenty of room for the Device Partners to produce, because with Microsoft it is still an open market, unlike Apple which does not allow their OS to be used on non-Apple produced devices.
Running a company like Microsoft requires long range thinking, not just the immediate. They are finally moving in the only direction that has a long term future if they are gong to stay relevant in the consumer market.
Reply  |  Post Message  |  Messages List  |  Start a Board

Excellent analysis. We are mobile software developers and this article is very helpful for making decisions on what to focus on.
Reply  |  Post Message  |  Messages List  |  Start a Board

I guess we see what we want to see? PC sales might be down year over year but they account for 91% of web traffic. Microsoft may only have 3% of the phone market but it's been growing at a good rate for the last 18 months and over the same time Apple has been falling. WP8 also accounts for more than 10 percent of the smart phones in Europe and it's growing. I am really not seeing how you can come to the conclusion that MS is tracking downward after the last 18 months. I would, and have put my money behind MS because of the trends in it's products.
Reply  |  Post Message  |  Messages List  |  Start a Board
Page 1 / 4   >   >>
Editors' Choice
Hot Topics