It has been a few months since Microsoft released its high-end Surface Book laptop, but the rumors of a next-gen device have already started.

Microsoft is working on the next generation of Surface Book, according to a recent post on Vine Report. The upcoming device will reportedly build on the features of the original, which was released in October 2015.

Surface Book, Microsoft's first laptop, is packed with powerful hardware. The 13.5-inch device has a detachable display with 3000 x 2000 resolution and 6 million pixels with 267 PPI, as well as a 0.4mm layer of Gorilla Glass for touch-responsiveness.

In its current form, the laptop is outfitted with a 6th Generation Intel Skylake processor. Users can choose either a Core i5 or a Core i7 model. Microsoft also promised 12 hours of battery life. At the time it was unveiled, Redmond placed Surface Book side-by-side with Apple's MacBook Pro.

Now Microsoft is working on a new model with upgraded specs. Another report from The Next Rex claims Microsoft will keep the 13.5-inch display but will boost the hybrid's resolution to 4K.

It has also been suggested that Surface Book 2 will include a USB-C port for better power, faster transfer speeds, and the option to connect a secondary display. A hardware upgrade may close the gap in the Surface Book's "fulcrum hinge," which currently leaves an opening when closed.

Early reviews of Surface Book praised its performance, vibrant screen, and strong build. Despite the impressive specs of the original, however, users had a few complaints about Surface Book that Microsoft will allegedly address in the upcoming release.

One of the more significant flaws in Surface Book, users claim, is battery life. Some analysts say the current Skylake processor is impeding the lasting power of the device, a problem Microsoft will reportedly fix by including the 7th Generation Intel i5 and i7 processors, otherwise known as the "Kaby Lake" series.

Considering the high cost of the original model, some potential buyers may like to see the next edition of Surface Book start at a more budget-friendly price point.

As for a release date, the rumors claim Microsoft will launch the second edition of Surface Book in June 2016. This would be interesting timing on Microsoft's part because a June launch would align with Apple's Worldwide Developers Conference the same month, when Cupertino is expected to unveil the 2016 MacBook Pro.

The new MacBook would serve as a direct competitor to the next edition of Surface Book, and it would be interesting to see the two devices launch side-by-side. 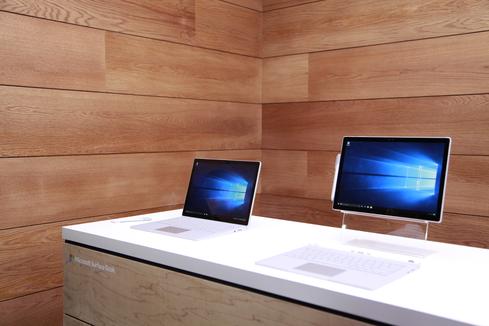 That said, there are a few issues that could prevent Microsoft from launching the next Surface Book in June. Rumors may claim Surface Book 2 will have Intel's Kaby Lake chip, but the chip isn't supposed to be done until year's end.

Microsoft has not officially released any information on the next Surface Book, so it's important to take these rumors with a grain of salt. However, we'll be on the lookout for more information as June approaches.

Kelly Sheridan is the Staff Editor at Dark Reading, where she focuses on cybersecurity news and analysis. She is a business technology journalist who previously reported for InformationWeek, where she covered Microsoft, and Insurance & Technology, where she covered financial ... View Full Bio
We welcome your comments on this topic on our social media channels, or [contact us directly] with questions about the site.
Comment  |
Email This  |
Print  |
RSS
More Insights
Webcasts
How Elite Analyst Teams are Transforming Security with Cyber Reconnaissance
Building the SOC of the Future: Next-Generation Security Operations
More Webcasts
White Papers
The Insider's Guide to IP Geolocation Data During COVID-19
Frost Radar: Global Threat Intelligence Platform Market
More White Papers
Reports
Email Security Threat Report 2020
DNS Network Traffic Volumes During the 2020 Pandemic
More Reports

This is approximately double the cost of an i5.   I don't see this model selling much.


I do like the Surface Pro but I recently bought an HP Pavillion laptop because I need the size.  I am not a big fan of hooking these small laptops to a monitor.


It looks like Microsoft is not too concerned with the drop in PC sales since it appears to be full steam ahead with the Surface Book.