Microsoft has confirmed plans to discontinue its Surface 3 tablet line in December and left many wondering what's coming next.

Microsoft is killing off the Surface 3, its budget hybrid device. Production will end by December 2016.

The news was originally reported on Thurrott.com, where it was noted that several variations of the Surface 3 are no longer available for purchase on Microsoft's website. The only model in stock has 64GB of storage, 2GB of RAM, WiFi, and LTE. For all other models, shoppers can opt to have an email sent when stock is refreshed.

It's unlikely the hybrid has seen a popularity spike in recent weeks, especially given how old the device is. Rather, the lack of inventory for Surface 3 was more likely a sign Microsoft had decided to stop making it. The company confirmed this, as well as an end-of-production date:

"Since launching Surface 3 over a year ago, we have seen strong demand and satisfaction amongst our customers," a company spokesperson said to Thurrott. "Inventory is now limited and by the end of December 2016, we will no longer manufacture Surface 3 devices."

[A deeper look: 9 Microsoft acquisitions that cost more than $1 billion.]

The publication did note that retailers including Staples and Best Buy are still selling the Surface 3 through their online stores, though it's not likely to be found on shelves.

Microsoft first introduced the Surface 3 in March 2015 as a smaller and more affordable version of the Surface Pro 3. It was designed with lower-end hardware, compared with the Pro model, and launched with a more budget-friendly price point.

A Surface 4 would seem a natural next addition to the Surface portfolio; however, officials have not discussed plans to launch an upgraded model of the Surface 3. The Microsoft rumor mill has also been quiet in terms of what might be included in a successor.

While we could hear more about a new device later this year, there's a chance we won't see an upgrade to the Surface 3 as Microsoft narrows its focus on enterprise customers. In June, the company launched a Surface Membership Plan through which small organizations can upgrade to new models for free and finance their device programs with monthly payments.

The membership plan, which is exclusive to businesses, is limited to Microsoft's Surface Pro 4 and Surface Book. The plan could be a sign Redmond is planning to cut production for all budget devices and instead focus on building its lineup of premium hybrids. 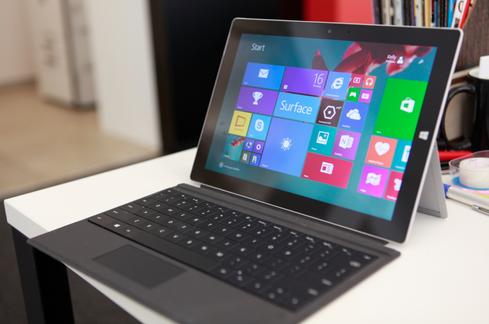 Its decision to focus on 2-in-1 devices is wise at a time when consumers are opting to purchase hybrids. While PC and tablet shipments continued to decline during the first quarter of 2016, 2-in-1 devices grew 13% during the same time frame.

Microsoft may be exiting the budget hybrid space, but we'll likely see its hardware lineup continue to grow. Reports released earlier this year indicate it's planning to launch upgrades to the Surface Book and Surface Pro later this year.

The Surface Book 2 will reportedly include the 7th Generation Intel Core i5 and Core i7 processor. Surface Pro 5 is rumored to have a larger 13.3-inch 4K display, a larger battery, and a built-in fingerprint scanner on the device. Both are expected to debut later this year, around the same time Apple releases its new MacBook Pro 2016.

Kelly Sheridan is the Staff Editor at Dark Reading, where she focuses on cybersecurity news and analysis. She is a business technology journalist who previously reported for InformationWeek, where she covered Microsoft, and Insurance & Technology, where she covered financial ... View Full Bio
We welcome your comments on this topic on our social media channels, or [contact us directly] with questions about the site.
Comment  |
Email This  |
Print  |
RSS
More Insights
Webcasts
Monitoring the Invisible - Digital Experiences in a Zero Trust World
Fact or Fiction? The Truth About Cloud Native Security
More Webcasts
White Papers
Dirty Little Secrets of Business Intelligence: Six Challenges to Adoption
Accelerate Network Operations Efficiency with AIOps
More White Papers
Reports
Incident Readiness and Building Response Playbook
SANS 2021 Cloud Security Survey
More Reports
Copyright © 2021 UBM Electronics, A UBM company, All rights reserved. Privacy Policy | Terms of Service