At its partner conference, Microsoft executives emphasized the importance of cloud and Windows 10 to its success in the upcoming year.

During a Vision Keynote at Microsoft’s Worldwide Partner Conference (WPC) in Orlando, Fla., officials took the stage to discuss the company's place as an innovator in a mobile-first, cloud-first world.

Earlier this week we learned about the new technologies Microsoft is planning to deliver in an effort to drive modern enterprise computing. The product announcements shed light on plans to "democratize big data" and simplify collaboration through new app technologies.

These products and updates to other services like Azure reflect a broader underlying strategy discussed throughout the week at WPC. The second day of keynotes emphasized the themes of data security, digital disruption, cloud technology, and Microsoft's strategic plan for the upcoming fiscal year.

"If we're going to empower every person, we need to protect every person," said Microsoft executive vice president and general counsel Brad Smith in his talk on data security. His quote was a subtle nod to the new corporate mission at Microsoft: Empowering every person and every organization on the planet to achieve more.

Technology requires a balance between freedom of expression and public safety. Smith explained Microsoft's commitment to protecting the digital security of the government, its enterprise customers, and everyday consumers. This will involve prioritizing specific security safeguards, processing personal information as instructed, regulatory compliance, and transparency.

Disruption was an ongoing theme of the morning.

Steven Guggenheimer, Microsoft's chief evangelist of developer experience, noted that today's connected technologies used to be distinct. Your phone and your TV had separate ecosystems. "The boundaries between those ecosystems have come down," he said. "They're gone." Now we're seeing a new wave of digital startups causing a technological ruckus across all sectors of the economy.

"So many new businesses are disrupting industries at a record pace. The good news is, we can help the disruptors disrupt," said Microsoft COO Kevin Turner, noting that the speed is not slowing. "The better news is, we can help everyone else disrupt their own business."

Turner continued to explain how cloud technology is the driving force behind the disruption, particularly in regards to mobility. All mobile devices and the mobility of experiences have been enabled by the cloud. 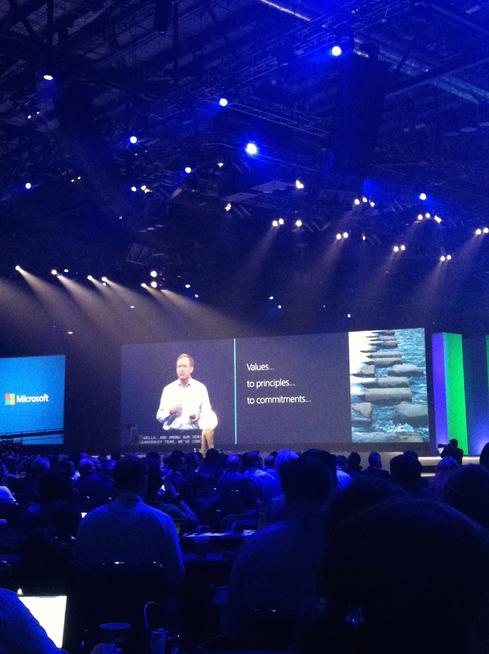 This creates a tremendous opportunity for Microsoft, which has committed to building the intelligent cloud as part of its core priorities.

Consumer use of Azure compute has more than doubled, said Turner, and over 85% of Fortune 500 companies have at least one Microsoft cloud enterprise service. Nearly 60% have at least two.

A stronger commitment to cloud is one of the four key components to Microsoft's strategic plan for its 2016 fiscal year. "We need to own the cloud," Turner emphasized. "The cloud market is being made right now." He noted said ownership will involve a demonstrated focus on security and privacy among the private, public, and hybrid clouds, in addition to services that accommodate individuals, teams, and organizations.

The second component of Microsoft's plan is ensuring success with Windows 10, which Turner described as "the best enterprise [OS] release we've ever released in the history of the company." He believes Windows 10 features like a singular app platform and Windows Store, mobility of experiences, and new hardware will combine to create a "seminal moment" for the company.

It was then Turner touched on the struggling mobile business, which has been called into question since a recent reorganization sliced 7,800 jobs.

"The reality is, we care about phones," said Turner, noting that the restructure was intended to position the business for sustainable growth. Rather than building a broad range of smartphones, Microsoft will instead narrow its focus on creating "a few killer devices" that will remain a key part of its portfolio.

Part three of Microsoft's FY16 strategy? Compete to win. Turner mentioned 1,252 customers that were "won back" from Google in the 2014/2015 fiscal year. He drew comparisons between Azure and Amazon Web Services, and juxtaposed hardware offerings from Google and Apple with those from Microsoft. His argument put Microsoft ahead, obviously, but customers' actions may paint a different picture.

The final piece in Microsoft's FY16 puzzle is to "obsess over customers and customer satisfaction." The company hopes its stronger focus on cloud, mobile, and security will attract an increasingly larger pool of Microsoft device and service users.