After this date, computer manufacturers will stop pre-installing Windows 7 Professional on PCs. Customers will only be able to purchase new Windows 7 PCs if they are part of existing stock.

The end-of-sales date for consumer PCs running Windows 7 arrived at the end of October 2014. Microsoft traditionally terminates sales for older iterations of Windows two years following the launch of the newest version.

[Inside the latest PC, Mobile previews for Windows 10.]

Windows 8 launched Oct. 26, 2012, so the end of sales for Windows 7 Professional should have also been in late October 2014. However, businesses did not welcome Windows 8 or Windows 8.1; most decided to continue running Windows 7 Pro.

As a result, the end-of-sales deadline for Windows 7 Professional was postponed. Microsoft reported it would give a one-year warning before telling manufacturers to stop pre-installing the OS.

Now, Redmond has officially given manufacturers the heads-up: Windows 7 Professional's days are numbered.

Certain businesses can find a way around the deadline. After Oct. 31, 2016, organizations participating in the Volume Licensing program may leverage Software Assurance or downgrade rights to switch from Windows 10 to Windows 7 on new PCs. 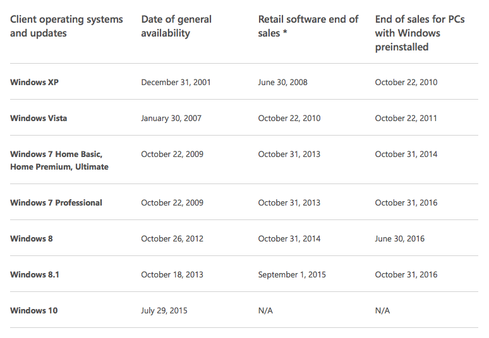 Microsoft's decision to confirm an end-of-sales date for Windows 7 Professional, Windows 8, and Windows 8.1 demonstrates its belief in the continued growth of Windows 10. As of early October 2015, the new OS had been downloaded on 8 million business PCs and 110 million total devices.

Kelly Sheridan is the Staff Editor at Dark Reading, where she focuses on cybersecurity news and analysis. She is a business technology journalist who previously reported for InformationWeek, where she covered Microsoft, and Insurance & Technology, where she covered financial ... View Full Bio
We welcome your comments on this topic on our social media channels, or [contact us directly] with questions about the site.
Comment  |
Email This  |
Print  |
RSS
More Insights
Webcasts
Unifying Your Endpoint Security Strategy
Leveraging Infrastructure as Code to Streamline Security & Operations
More Webcasts
White Papers
The 2021 Security Outcomes Study
Spear Phishing eBook: Inbound Attacks Detected By Tessian Defender
More White Papers
Reports
SANS 2021 Cloud Security Survey
Gartner's Top 9 Security Trends in 2020
More Reports

@jastroff tough to say! It's clear we're seeing a major push for Microsoft's Win10 strategy in 2016. I don't think it's a coincidence that Microsoft confirmed the end-of-sales date for Windows 7 Pro around the same time it announced it will be automatically loading Windows 10 onto consumer PCs starting next year. Clearly, it's hoping to move on from all older versions of Windows, and it's trying to get businesses to do the same.

Will 10/31/2016 actually mark end-of-sales for Windows 7 Pro? It could depend on how businesses upgrade to Win10 this year into next. After all, the poor response to Windows 8 caused the delay of end-of-sales for 7 Pro. Right now Win10 business adoption is over 8 mil, but that could slow -- and how will MSFT react if it does?