From a new Start menu to Cortana to the Internet of Things, Microsoft previewed the future of Windows this week at Build. 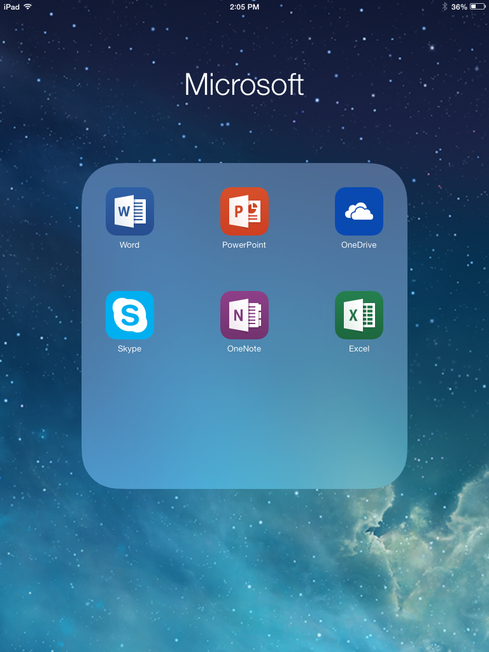 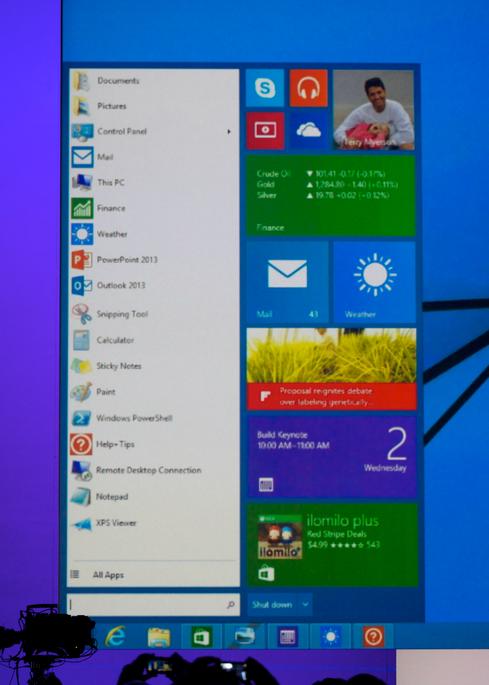 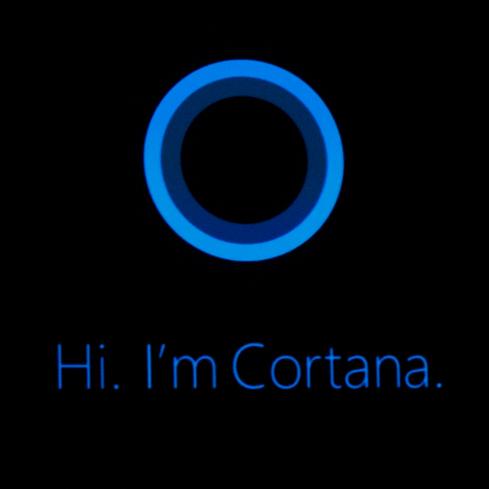 accounts. Cortana visualizes the data it collects in a virtual "Notebook," which the company says will keep users in control of how the app stores and uses personal data.

Currently, Cortana is only a Windows Phone 8.1 product -- and a beta, at that. But if Microsoft has preached a theme lately, it's been personalized experiences that span devices. The concept was a major talking point in recent Office announcements, for example, and it underscores large parts of the company's OneDrive and Bing strategies. It's likely only a matter of time until Cortana extends to Windows devices and the Xbox.

4. Modern apps will look more like legacy apps and will eventually run in windows on the desktop.
Tuesday's Windows 8.1 update includes a number of tweaks to make Modern apps behave more like legacy titles. The new titles can be pinned to the desktop taskbar, for example, and once they're launched, they can be minimized just like traditional desktop applications. The update also modifies the Start screen to make it friendlier to mouse-and-keyboard users; for example, context menus surface when users right-click Live Tiles. But thanks to the taskbar changes, users can now run Modern apps completely from the desktop, without ever accessing the tiled Start screen. 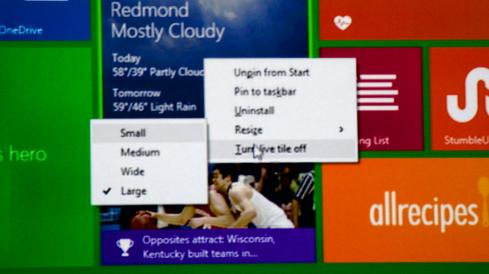 The Modern UI will soon include right-click context menus.

Eventually, Microsoft will take this effort further by enabling Modern apps to run in windows on the desktop. Microsoft execs told developers this strategy will expose their apps to new users, and in an interview, Microsoft product manager Brad McCabe said the changes challenge the notion that Modern apps are driven exclusively by touch. As was the case with the Start menu, Microsoft would not say when windowed Modern apps might arrive.

5. Windows is coming to the Internet of Things.
Processors are smaller and more powerful than ever, which means they can be placed in almost anything. Microsoft demonstrated this point with a giant piano -- played via stomping feet, a la the movie Big -- that runs Windows. 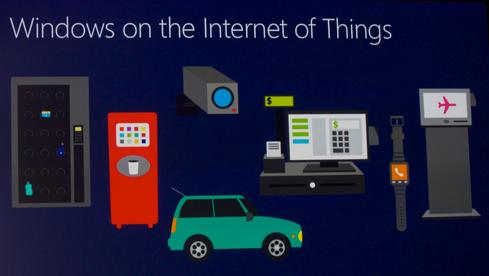 Windows is coming to the Internet of Things.

What's the point of such a device? Right now, mostly to show off. But CEO Satya Nadella, echoing remarks he made last week when introducing the Office suite for iPads, said new form factors will emerge that challenge how we define computers. These devices, perhaps even pianos, will collect data about their users and environments, allowing us to quantify virtually everything, and to extract new insights via big data technologies. 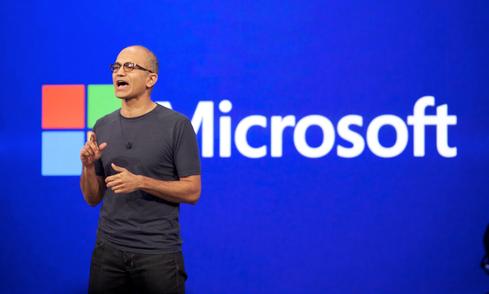 In his few appearances as CEO, Satya Nadella has preached
the potential of data-driven personalization.

Microsoft is hardly the only company harboring this interest. Cisco has been evangelizing many of the same talking points for the last year, Intel dedicated its CES presence largely to the Internet of Things, and Apple and Google have shown interest in translating their operating systems from conventional computing devices to "things" such as cars and clothing accessories. But with Nadella at the helm, Microsoft appears ready to ramp up this agenda. 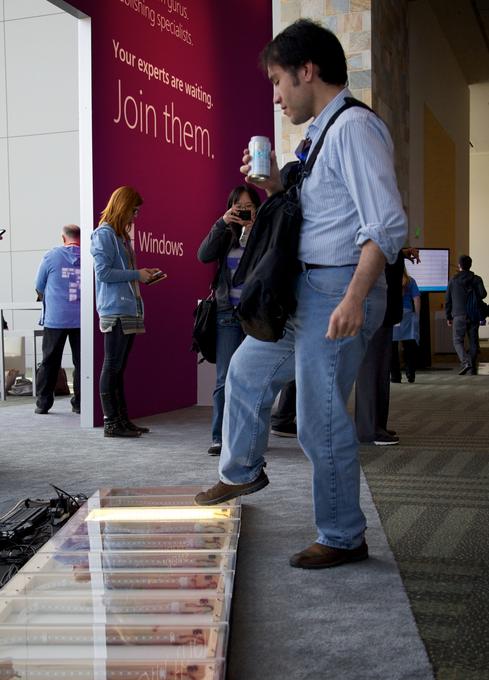 6. Universal apps are finally here.
Since launching Windows 8 and Windows Phone 8 in 2012, Microsoft has worked to unify the code across its various platforms. With enough unification, or so the running commentary has gone, developers would be able to write a single app and deploy it across the entire Windows ecosystem, from phones to PCs.

At Build, Microsoft announced that these benefits are no longer theoretical. Thanks to new tools, developers can now target any device type with a single

set of code. The new version of Visual Studio automatically adjusts the interface, producing a workable version for each platform. If developers choose, they can tune segments of the code to further tailor a given version of their app to a particular device. One upshot is that, whereas developers must still build separate apps for iOS and Mac OS X, they can develop for Windows and Windows Phone via a single pipeline. 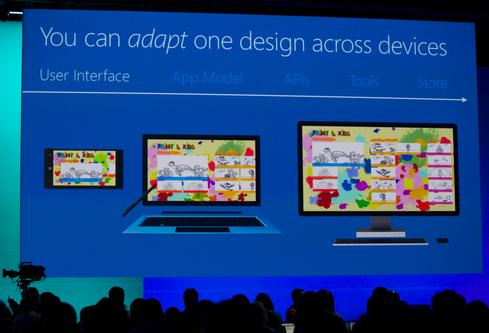 "I think it's enough to quiet the rebellion amongst the diehard Microsoft devs," Forrester analyst Jeffrey Hammond said in an interview. "We've been getting into a situation where they are not able to defend developing for multiple Microsoft platforms."

But Microsoft also emphasized that its tools can help with cross-platform development, especially for the web. Since Nadella took the reins, Microsoft has stressed that it wants its technology everywhere, not just inside the walled garden of the Windows ecosystem. If that means developers use Visual Studio to target iOS, Android, and Windows Phone concurrently, Microsoft is happy to oblige. 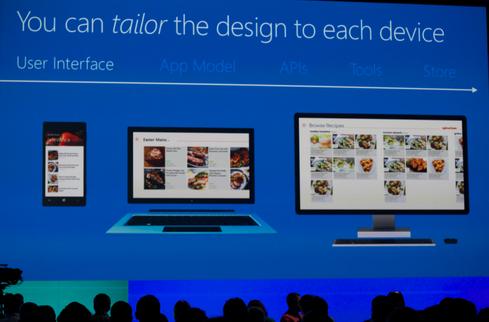 Once a basic universal app is built, developers can tune the UI
to match a specific form factor.

The company also demonstrated a way to "broker" legacy apps into newer versions. A company can take an aging business app built for old desktops, re-appropriate portions of the code, and feed them through Microsoft's tools to produce a new Modern-style app. The company positioned this tactic as a way for IT to embrace new approaches, such as touch, while continuing to collect on previous investments.

7. Windows is pursuing new UI inputs.
Windows came to prominence with mice and keyboards, and Microsoft has been trying for more than a year to popularize touch. But at Build, Microsoft execs also emphasized Kinect-based gesture controls, even going so far as to call them "the future." Natural language technologies, which were on display in Cortana, represent another of Microsoft's obvious interests. During a brief preview of touch-first Office apps for the Modern UI, Microsoft reps also discussed the potential for high-precision styluses and similar accessories.

8. Windows will run on devices at all price points.
Microsoft officials pointed out that, whereas some digital assistants are available only on high-end devices (read: Apple's Siri), Cortana will be available across the spectrum once Windows Phone 8.1 launches this spring. They also pointed out that all current Windows Phone 8 devices should run the new OS (a jab at cheap Android models that run old versions of the OS). The point? With most device growth in emerging markets, Microsoft senses an opportunity to deliver a premium experience to budget-minded demographics. This tactic includes not only smartphones, but other devices, as well; McCabe said the Windows 8.1 update reduces the OS's footprint, which should enable it to run on less powerful, less expensive hardware.

Thanks to eliminated license costs, Windows devices should be
available at a wide range of prices.

Microsoft is changing its licensing system to accommodate the new strategies. It will no longer charge for Windows licenses on devices with screens smaller than nine inches, and when the Internet of Things version is ready, it will be free, as well.

Michael Endler joined InformationWeek as an associate editor in 2012. He previously worked in talent representation in the entertainment industry, as a freelance copywriter and photojournalist, and as a teacher. Michael earned a BA in English from Stanford University in 2005 ... View Full Bio
We welcome your comments on this topic on our social media channels, or [contact us directly] with questions about the site.
Comment  |
Email This  |
Print  |
RSS
More Insights
Webcasts
Data Protection Strategies and Secrets - 12/10 @ 11am EST
Architecting Security for the Internet of Things
More Webcasts
White Papers
5 Key Steps for Assessing Your Security Effectiveness
Your Security Team's Practical Guide to Implementing Automation
More White Papers
Reports
Email Security Threat Report 2020
Special Report: Understanding Your Cyber Attackers
More Reports
Copyright © 2020 UBM Electronics, A UBM company, All rights reserved. Privacy Policy | Terms of Service