Microsoft's Cloud Plan: What's In It For You? - InformationWeek

Its Azure and apps strategies are giving businesses new choices.

Azure has drawn a lot of customer interest, and Kelley Blue Book is typical in the questions it's asking before going--to borrow Ballmer's phrase--"all in" with using the cloud. Kelley Blue Book, which gives car shoppers data on vehicle prices, is keen for Azure to take over spikes in traffic and provide disaster recovery, so it might eventually drop its second data center and save about $100,000 a year. But Microsoft only released the monitoring and diagnostic APIs late last year, and Andy Lapin, Kelley's director of enterprise architecture, can't get a clear view of how Azure is performing from a management console. "As of yet, no one has come up with a monitoring platform for Azure," he says.

But such tools are coming, and moving the .Net applications on Kelley's Web site to Azure should be fairly straightforward, Lapin says. "We're confident it will work," he says. Lapin envisions on-demand scalability--automatically firing up Azure server instances when utilization of Kelley's own servers exceeds 90% and ratcheting back when utilization falls below 80%. For now, though, he's waiting for better monitoring.

Muglia admits Microsoft has a lot of building to do. His short-term to-do list includes support for infrastructure as a service, larger database partitions, analysis and reporting capabilities in SQL Azure, a better developer portal, and bringing the new .Net 4 into Azure.

Muglia says companies will save money with Azure by cutting back on infrastructure costs, but he predicts the big gains will come in the form of business agility, including getting software developed and implemented faster. "You can't just do it at the infrastructure layer," he says. Virtualized software and hardware are key in the cloud, but "the real magic happens in the way applications get built," says Muglia. "That's where most of our investment has been."

Microsoft's Windows NT operating system took 10 years to become mainstream, Muglia says. With Azure, uptake will be much faster--three to five years, he predicts, but Azure is every bit as much a "rough diamond" as NT was when first released in 1993.

Software As A Service 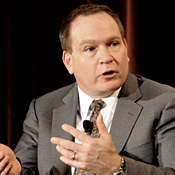 "There are a few people in the world who can write cloud applications. Our job is to enable everybody to be able to."
-- Bob Muglia, Microsoft's server and tools president
Exchange Online and SharePoint Online have been Microsoft's leading SaaS offerings through its Business Productivity Online Suite (BPOS), which includes online versions of Exchange and SharePoint. With the upcoming launch of Office 2010 for business in mid-May, Microsoft shows that it's serious about making Office relevant in the cloud, too, with a more powerful, browser-based version that's Microsoft's answer to Google Apps. Office 2010's online features include real-time co-authoring in a document, something Google features in the recent rewrite of its online word processor and spreadsheet.

A free, ad-supported online version of Office 2010, aimed at consumers, will become available in June. Businesses will have two other options.

Those that license Office 2010 for PCs will also be able to offer browser-based versions of those apps from Windows servers in their data centers. And sometime in the coming months--Microsoft hasn't said just when--it will offer Office 2010 Web-only apps, though it isn't saying if that will be by monthly subscription or volume licenses. Microsoft still doesn't have the cheap, simple pricing model of Google ($50 per user per year for Google Apps), but Office 2010 will bring the online access and collaboration options employees increasingly want.

One thing to watch is whether Office 2010 gets bundled with BPOS, which includes Exchange and SharePoint. To date, Office has required a separate license. Given Google's $50-per-user offer for apps, e-mail, and a collaboration platform, Microsoft will be under pressure to cut deals that roll BPOS (listed from $120 a year) and Office 2010 (price to be determined) together.

Office 2010 is getting a big makeover for the cloud in terms of browser-accessible features and functionality. (See next week's issue for more coverage of news features in Office 2010 and SharePoint 2010.) Whether the business model surrounding Office gets altered as much remains to be seen.

The Webified Office 2010 morphs from a standalone content creation tool to more of a group collaboration tool. It's an area where Google's productivity tools threaten to take the lead. When people rave about Google's online documents and spreadsheets, it's invariably for the ability to work on them simultaneously or share them online.

The new browser-based Word will let multiple users work in a document. Yet it's different from Google's real-time co-authoring, which lets collaborators write anywhere in the document. Microsoft decided people would find that too intrusive in Word. So, when a writer grabs a paragraph, it's locked until he or she is finished revising, though people can work elsewhere in the document. (However, in OneNote, which is more a brainstorming tool, testers liked open collaboration, so Microsoft includes it. "The same people were comfortable with anarchy in OneNote and wanted peace in Word," says Chris Capossela, Microsoft's senior VP of information worker products.)

Driven by BPOS, Microsoft's cloud business is already generating a substantial revenue stream. Stephen Elop, president of Microsoft's business division, says Microsoft is on track to generate half of SharePoint, Exchange, and Dynamics CRM revenue from services within four years. "The sense of momentum is definitely stronger than it was a year ago," Elop says.