Microsoft's Nadella: Can He Walk The Walk? - InformationWeek

Microsoft CEO Satya Nadella's tenure got off to an auspicious start last week when he introduced native Office apps for the iPad. But with the Microsoft Build conference for developers kicking off this week, Nadella will have time neither to savor his victory nor to ease into the next challenge.

Ironically, Nadella faces pressure because the iPad apps have been so well received. Despite being at least two years overdue, the products represent a new tablet productivity standard. But they also represent a potential death blow to the one advantage Windows tablets had over iPad: running Microsoft Office. The iPad Office apps also indicate an accelerating shift away from Windows as the center of Microsoft's strategy, even -- as Windows XP's remarkable longevity attests -- many businesses remain reliant on older tools and infrastructure. Nadella's star might fade at Build if he can't reconcile new cross-platform tactics with a coherent Windows OS and device strategy.

But here's an important point to remember: The reasons Nadella impressed so many people had almost nothing to do with the Office apps' quality. Yes, as CEO, Nadella could have further delayed them, perpetuating Steve Ballmer's mostly unsuccessful attempt to prop up Windows tablets. But even if Nadella gave the go-ahead, he claims little ownership over the finished products; most of the development would have necessarily occurred before he was even in contention for the top job.

[What will Microsoft reveal this week about the future of Windows? Read Microsoft Build: 8 Things to Watch.]

So, if Nadella gets only partial credit for the apps, why is he earning such strong notices? Rhetoric.

Under Ballmer, Microsoft execs sometimes spoke as if they couldn't hear customer concerns, and as though Windows still held the same sway it did in the 90s. Ballmer himself sometimes exemplified this attitude. His passion for all things Microsoft was commendable, but it also earned him a reputation for bombast and blind partisanship. When the company released Windows 8.1 at last year's Build, Ballmer didn't confront rampant criticism as much as argue the OS needed to be "refined," and that bad sentiment was due to an early dearth of touch-equipped hardware rather than flaws with the OS itself. 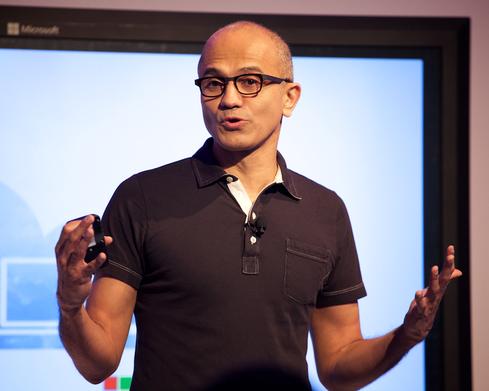 Nadella, on the other hand, expertly beat would-be critics to the punch, bookending the Office for iPad event by acknowledging that customers are unsure of the company's strategy and promising that everything will become clearer in the next few weeks. His attitude seemed proactive rather than evasive. He even allowed himself to be mobbed by reporters after the press conference.

This sort of ad hoc Q&A doesn't generally happen -- but the press conference didn't start conventionally, either. CEOs often are introduced respectfully by a peer, and sometimes by spotlights, glossy videos, and a booming voice emanating from loudspeakers. Nadella, in contrast, just sort of walked to the front of the room and began talking. One second the press conference hadn't started, and then suddenly, with almost no pretense, it had.

Nadella's accessibility wasn't all that stood out. It was also how and when he asserted his own voice. On one hand, at a high level, much of what Nadella said about Microsoft's strategy echoed remarks Ballmer and even Bill Gates have made. All have talked about machine learning and personalized experiences that translate across devices via the cloud, for example. Only Nadella has discussed these concepts so enthusiastically for non-Windows products. On the other hand, Nadella emphatically rejected the notion that cross-platform opportunities, such as Office for iPad, represent a compromise for Microsoft. Ballmer's strategies appeared driven by fears of compromise.

Nadella also sprinkled in references to pervasive sensors, ubiquitous computing, and new form factors, hinting at future projects involving wearable devices and the Internet of Things. He additionally quoted poetry, cracked math jokes, and waved off a question about concern from Wall Street investors. But most important, Nadella insisted that if Microsoft empowers users in the ways they wish to be empowered, it will succeed, a sentiment that might give pause to the many Windows 8.1 users who still want a Start menu.

Rhetoric must at some point turn to action, of course, and Office for iPad is only a small start, especially given Nadella's minor authorship in the project. But Nadella seems to know this. Before anyone could point out the ongoing struggles of Windows 8.1 or the Surface line, Nadella reassured attendees that Windows remains a key part of the company's agenda, and that it is working on substantial device upgrades.

It was a bold statement: When Nadella offered the reassurance, he knew he'd have to justify it in detail less than a week later, at Build. People who rely on seductive language, rather than realistic ideas, generally don't invite such quick scrutiny. In short, Nadella showed he can talk the talk as CEO. At Build, we'll see if, as Nadella's confident words suggest, he can walk the walk as well.

Michael Endler joined InformationWeek as an associate editor in 2012. He previously worked in talent representation in the entertainment industry, as a freelance copywriter and photojournalist, and as a teacher. Michael earned a BA in English from Stanford University in 2005 ... View Full Bio
We welcome your comments on this topic on our social media channels, or [contact us directly] with questions about the site.
Comment  |
Email This  |
Print  |
RSS
More Insights
Webcasts
How Elite Analyst Teams are Transforming Security with Cyber Reconnaissance
Strategies for Success with Digital Transformation
More Webcasts
White Papers
A Technical Deep Dive on Software Exploits
Centralized Security Policy Management Across Hybrid Cloud Environments Should be an Obvious Strategy
More White Papers
Reports
Email Security Threat Report 2020
The Drive for Shift-Left Performance Testing
More Reports

Ballmer thought Office was an advantage for Surface. Not very many agreed with him, which is what the market has shown. Office on the iPad is the right move, and really has been for years. Even from a business standpoint, revenue for the software on someone else's hardware is better than no revenue for software on your own hardware because no one wants to buy it.
Reply  |  Post Message  |  Messages List  |  Start a Board

I believe he will deliver and bring the new change in MS.
Reply  |  Post Message  |  Messages List  |  Start a Board

Regarding Office no longer being an advantage for Microsoft's tablet strategy:  Was it really the advantage Microsoft thought it was?  If so, why didn't the Surface sell if iPad owners are suddenly crazy about Office for iPad?  If Office for iPad has really been sitting on the shelf to give an advantage to the Surface, where's the touch-first version of Office for the Surface?  Wouldn't it make sense to feverishly work on that while the iOS version is on the shelf and then release them together?  Of course the Surface version would debut with printing (even if the touch version had to launch a COM call to desktop Office to do the printing -- although this would be absurdly silly!) giving another temporary advantage over the iPad.  (NOTE:  I'm using Surface as a synonym for the Windows Modern UI which is a mouthful...)

Bottom line:  Things just don't add up.  To me, Microsoft is a puzzle.  I read that MS spends more on R&D than most or all other companies.  How is this money being spent?  I read that Apple and Google spend less but we're always reading about new ideas brewing at Google and, to a lesser extent, Apple.  Where's the buzz around the billions Microsoft spends on R&D?  I know folks lay a lot of blame on Balmer but is it possible that the most successful software company in the world was run for years by someone who repeatedly made such poor decisions?
Reply  |  Post Message  |  Messages List  |  Start a Board
Editors' Choice
Hot Topics