Microsoft's enterprise sales are booming, but Surface is still no match for the iPad.

Microsoft handily beat Wall Street estimates Thursday, announcing revenue of $24.52 billion for its second fiscal quarter, which ended Dec. 31. The highest-grossing quarter in company history, Microsoft's second quarter, was up from $21.5 billion in the same quarter last year. Net income was $6.6 billion, which translated to 78 cents per share.

Analysts had expected net income of $5.8 billion and revenue of $23.7 billion, according to Thomson Reuters.

If Thursday marked the last earnings report for outgoing CEO Steve Ballmer, he will have exited on a high note. Since announcing his retirement plans in August, Ballmer has been a punching bag in the press, with reports not only critiquing his previous leadership but also implying that he and Bill Gates have become impediments to the search for Ballmer's successor. But since bottoming out in July, when the company took an embarrassing $900 million write-down on unsold Surface inventory, the company has exceeded expectations in consecutive quarters.

Microsoft's good news includes caveats, though. The company made progress in its quest to woo consumers, but don't let headlines about "doubled Surface revenue" mislead you; Microsoft's tablets are still losing money. What were the highs and the lows for Microsoft? Here are five key takeaways from the company's strong earnings.

1. Microsoft's enterprise business is booming
Microsoft's consumer-oriented efforts grab a lot of press, but it's making its most rapid progress with business customers. Overall commercial revenue grew 10% to $12.67 billion. SQL Server achieved double-digit revenue growth and cloud services revenue more than doubled, with particularly strong growth in both Office 365 and Windows Azure. Windows revenue from enterprises was also up, propelled partially by companies migrating off of Windows XP.

2. Microsoft made restricted progress among consumers
Some Ballmer critics argue that Microsoft should spin off its consumer businesses and focus on lucrative enterprise products. Thanks to strong Xbox sales, the most recent quarter makes this argument a little less tenable. Microsoft sold 7.4 million Xbox consoles in the second quarter, including 3.9 million units of the new Xbox One. Sony's PlayStation 4 has reportedly edged out the Xbox One in overall sales, but demand for both units has been more robust than many commentators had expected.

Microsoft also reported that more than 3.5 million people have subscribed to Office 365 Home Premium, up from around 2 million last fall. Other consumer-related highlights included a 34% increase in revenue from Bing. 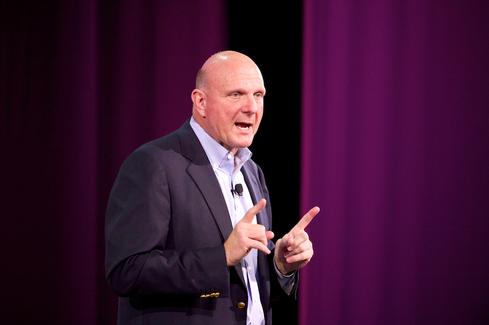 3. Consumers are still indifferent to Windows 8.1
Surface revenue reached $893 million, more than doubling the $400 million Microsoft earned from its tablets in the first quarter. But according to the company's most recent SEC filing, Microsoft is still losing money on the devices -- around $40 million in quarter two.

More to the point, revenue of $893 million implies Surface sales of fewer than 2 million devices, especially since the company has already said holiday sales were biased toward the discounted Surface RT. For context, analysts expect Apple to announce it sold around 25 million iPads over the holidays.

The Surface wasn't the only Windows 8.1 device that earned consumer shrugs; slumping PC sales continued to eat into Microsoft's bottom line as well. Windows OEM revenue was down only 3% year-over-year, but that was thanks largely to a 12% boost in revenue from the professional-oriented Windows OEM Pro. With PC shipments off 10% last year, the worst slide on record, Microsoft conceded that Windows revenue from consumers was "soft."

4. The PC slump is affecting consumer Office sales too
With consumers spending more time on tablets and going longer between PC upgrades, Office revenue from consumers declined $244 million, or 24%. Microsoft said some of the decline was offset by the aforementioned increase in Office 365 Home Premium subscribers.

5. With no news on the CEO front, Microsoft still faces questions
By any standard, Microsoft's quarter exceeded expectations. But the company's next CEO will face tough questions. The company's enterprise businesses are performing well, but its consumer businesses aren't generating cash at nearly the same rate. Even when devices sell well (and many of Microsoft's still don't), they can't generate the same margins that software can. That's one reason Microsoft's profits were up only 3% even though revenue was up 14%.

The company undeniably made inroads with consumers during the most recent quarter, and with BYOD becoming more mainstream, it's easy to see why Microsoft feels compelled to pursue the market. But with Microsoft still lacking a strong foothold in mobile, and consumer PC sales still declining, time will tell if Ballmer's replacement sticks with the current strategy.

Does Microsoft have to remain a hybrid consumer-enterprise business or can it take the path of IBM and sell its consumer assets to focus on more lucrative corporate sales?
Reply  |  Post Message  |  Messages List  |  Start a Board

Great point, Doug. As much as Ballmer gets slammed for missing mobile, he also oversaw the company as it made aggressive and well-executed moves to become a force in both public and private clouds.
Reply  |  Post Message  |  Messages List  |  Start a Board

Here's the key bit for enterprise customers: "SQL Server achieved double-digit revenue growth and cloud services revenue more than doubled, with particularly strong growth in both Office 365 and Windows Azure. Windows revenue from enterprises was also up, propelled partially by companies migrating off of Windows XP."

SQL Server keeps growing -- more of a threat to Oracle and IBM DB2 than Hadoop. Also, Microsoft's early, big-bucks bet on cloud -- with Azure and Office 365 -- is paying off. Ballmer can at least take credit for that.
Reply  |  Post Message  |  Messages List  |  Start a Board

It says a lot that even when Surface revenue DOUBLES quarter-over-quarter, it still adds up to less than one-tenth of iPad unit sales. On top of that, Microsoft can't enjoy any profits because the cost of doing business with Surface has them $40 million in the hole. Ugh.

But if you're a glass half-full kind of person (and I'm not) wouldn't you say a doubling of revenue at least represents progress in Surface's war of attrition given the rough year the devices had? Consumers are at least warming up to Surface and opening their wallets. I guess we'll have to see if the Surface revenue vs. expenses ratio improves in the coming quarters. If not, Microsoft will just continue to use sweet enterprise profits to feed the elusive consumer beast (i.e. rob Peter to pay Paul).

Thanks for the comments.

It's true that iPads vs. Surface isn't exactly an apples-to-apples comparison, on a number of levels. Windows tablets vs. iPads would certainly provide another angle. I haven't seen any official sales data from other Windows OEMs, but a bunch of partial data produced by marketing firms and online ad networks suggest that Surface tablets outsold other individual Windows models over the holidays. So while the "25 million vs. 2 million" equation would certainly improve for Microsoft if we were to include other Windows tablets, it's still a pretty lopsided victory for Apple. This is especially true when you consider margins. Microsoft admitted in its SEC filing that it's still losing money making Surface products, and they said previously that the discounted Surface RT was the top-selling model over the holidays. Apple not only sells more tablets but does so at higher margins. If Windows tablets are finding success, it's partially due to their unique utility, but largely because prices (and thus margins) have come way down. Microsoft can still make hardware into a useful business, and I think Windows tablets will find a place-- but they're still a long ways off.

As for the Surface Pro being an Ultrabook-- absolutely. Microsoft initially made the mistake of inviting comparisons between Surface products and iPads. While that comparison makes some sense for the Surface RT and Surface 2, the Pro and Pro 2 are aimed at a different group. Since last summer, Microsoft reps have almost ostentatiously referred to the Surface as an Ultrabook in virtually every conversation I've had with them. I think they'd help that perception, though, if they included the damn keyboard.
Reply  |  Post Message  |  Messages List  |  Start a Board
InformationWeek Is Getting an Upgrade!