While the smartphone market continues to grow, mobile device sales won't make up for an overall decline in consumer spending this year, according to a new report from Gartner.

Good news: Global device shipments are expected to rise in 2016. Bad news: The PC market will see another year of decline, and consumer spending is poised to decline for the first time ever, Gartner reported.

On Jan. 20, the research firm has released its 2016 device forecast, which predicts 1.9% growth for worldwide shipments of PCs, tablets, mobile phones and "ultramobiles," a category which refers to PC/tablet hybrids.

Device shipments will reach a combined total of 2.4 billion units in 2016. However, consumer spending is expected to fall 0.5% for the first time ever.

Broken down, the device data gets more complicated.

The report's PC market data for 2016 includes both traditional PCs and premium ultramobiles. This segment is predicted to reach 287 million shipments in 2016, a decline of 1% year-over-year.

For the most part, this year's PC decline is related to desktops and laptops, said Gartner analyst Tuong Nguyen. The decrease in consumer spending is primarily related to a slower market for traditional PCs.

Nguyen explains the PC market will continue to shrink, but declines will not be as steep as they have been. The most recent holiday season was especially harsh for PC shipments, which tumbled 8.3% during the fourth quarter of 2015.

Microsoft's new operating system will undergo more rapid adoption than earlier versions of Windows, Gartner reported. A survey of 3,000 business respondents in the fourth quarter of last year found over 60% will test and evaluate Windows 10 within nine months; 80% within one year.

The finalized end-of-support for Windows 7 is largely driving the upgrade trend among businesses, said Gartner analyst Mikako Kitagawa. Because Windows 7 is big in the enterprise sector, many are starting earlier with testing and deploying Windows 10.

With a shorter testing period, business users could begin Windows 10 migrations by the end of 2016, Ranjit Atwal, research director at Gartner, wrote in a statement. The new system may also bring device upgrades to the enterprise -- Windows 7 and 8.1 will not be supported on PCs with new CPUs. 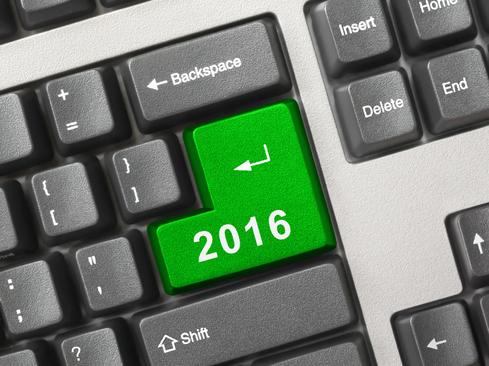 Atwal reported businesses could move as much as 40% of their installed base onto new Windows 10 devices by the end of 2017, motivated by the appeal of a hybrid touchscreen. "This will be the catalyst for growth in the PC market in 2017," he wrote.

Gartner's data indicates continued growth for smartphones, which are expected to increase 2.6% in 2016 and make up 82% of the mobile phone market by year's end. However, consumers' phone purchases will not be enough to compensate for the PC decline.

The phone market is "slower than it has been," Gartner's Nguyen told InformationWeek. While most of the decline in consumer spending can be attributed to PCs, the demand for premium smartphones is also down.

People have been upgrading from feature phones to smartphones for the last five to seven years, but now the adoption rate has slowed in mature markets. "Most people who want a smartphone have one already," he explained.

Further, the advancements in modern smartphones are not compelling enough to drive upgrades. Most smartphones have more than most people need, said Nguyen. Average consumers simply don't want to spend money on a slightly better resolution or camera in a new phone, especially in China and other emerging markets.

This is especially relevant as a growing number of devices are competing for consumers' wallets. When it comes to allocating funds, consumers may opt to purchase a smartwatch or fitness band instead of an upgraded smartphone.

Kelly Sheridan is the Staff Editor at Dark Reading, where she focuses on cybersecurity news and analysis. She is a business technology journalist who previously reported for InformationWeek, where she covered Microsoft, and Insurance & Technology, where she covered financial ... View Full Bio
We welcome your comments on this topic on our social media channels, or [contact us directly] with questions about the site.
Comment  |
Email This  |
Print  |
RSS
More Insights
Webcasts
Monitoring Critical Cloud Workloads
4 Practical Tips for Building a Data Lake
More Webcasts
White Papers
Why You're Wrong About Operationalizing AI
Top Serverless Security Risks and How to Mitigate
More White Papers
Reports
Gartner's Top 9 Security Trends in 2020
2021 Application Security Statistics Report Vol.2
More Reports

Broadway , much good luck to you in your search . The process to buy a smartphone today is beyond complex . I consider myself a savvy shopper and someone understands true cost of ownership . Once you pull back the layers of the onion the fees add-ons , and mysterious pricing of the phone itself is enough to make anyone run from their local phone store screaming . Not only are the phones priced out of most people's budgets but the monthly fees with data additions are incredible . Trying to get a phone with a monthly fee less then hundred dollars is a challenge . Eventually we are going to reach a saturation point on the smartphone market , the enhancements to the next new model are minimal . Phone manufactures are going to need to find a way to drive purchases of their phones that have little to no extra value added features . I suspect the tide will turn but not before the pain is intense for consumers .
Reply  |  Post Message  |  Messages List  |  Start a Board

Part of the issue with locking smartphone purchases is all of the nonsense that the wireless carriers use to market their services . The process of selecting a wireless plan and/or phone is so complex that it makes the entire purchase worse than car shopping. The new trend of making users buy their phones for almost the price of the laptop is ridiculous . The leasing plan isn't much better . These all add to the complexity of the purchase and scare away consumers . What upgrades were available with the contract commitment the process was easier . Now there are so many flavors of lease versus buy and variable contract pricing it makes the entire value proposition convoluted .
Reply  |  Post Message  |  Messages List  |  Start a Board
InformationWeek Is Getting an Upgrade!