Microsoft plans to mark the first year of its latest OS with several new features in a Windows 10 Anniversary Update.

Mark your calendars, Windows users. Microsoft has confirmed the Windows 10 Anniversary Update is slated for a public rollout on Aug. 2.

Windows 10 was officially released on July 29, 2015. Almost one year later, Microsoft reports over 350 million devices running Windows 10 -- an increase of 50 million since the last device count in May 2016.

Customer engagement is also high, with users spending more than 135 billion hours on the OS.

To celebrate the one-year mark, Redmond is releasing one of the biggest updates to arrive on Windows 10 since its public rollout. The Anniversary Update includes new features for businesses and consumers.

Security is a priority in the coming update. Two major security features arriving on Aug. 2 are Windows Defender and Windows Hello for apps and websites in Microsoft's efforts to eliminate the password.

Biometric authentication system Windows Hello can be used to log in to apps and websites within Microsoft Edge. As part of the Anniversary Update, Windows users can also use Windows Hello to unlock their PCs using companion devices.

For individual users, improvements to Windows Defender will include an option to automatically schedule quick, regular PC scans and receive alerts and summaries if threats are detected.

Cortana, which first arrived on the desktop in Windows 10, will now be available above the lock screen so you can set reminders or play music without unlocking it. Cortana will also save and recall important information like frequent flier numbers, and give notifications across all devices where it is present.

Windows Hello isn't the only improvement arriving in Microsoft Edge. The browser will come with power-saving upgrades like using less memory and fewer CPU cycles, and lessening the affects of background activity. Microsoft has already touted the lasting power of Edge, and this indicates it's doing more to preserve users' battery life. 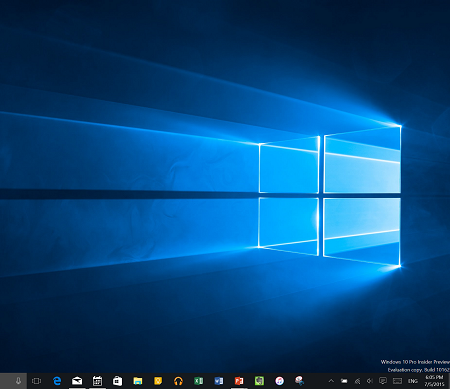 Edge will also be updated with extensions including the Pinterest "Pin It" Button, Amazon Assistant, LastPass, AdBlock, and AdBlock Plus in the Windows Store. It'll also have a new accessibility architecture to support modern web standards like HTML5, CSS3, and ARIA.

Microsoft is also working to improve digital pen capabilities with Windows Ink, a central hub for using the pen in Windows 10. You'll be able to use Windows Ink to take notes, draw, or sketch on screenshots. Smart Sticky Notes help you remember tasks and suggest directions.

Some of the core apps in Windows 10 have been updated to include features to support inking. You can handwrite notes in Office or Edge, or draw custom routes on the Maps app.

Windows 10 has been available as a free upgrade since it launched last summer, but the clock is ticking for anyone still running older versions of Windows.

The Anniversary Update will be released a few days after Microsoft stops offering Windows 10 for free to current users of Windows 7, Windows 8, and Windows 8.1. If you want the upcoming features at no cost, be sure to upgrade to Windows 10 before July 29.

Kelly Sheridan is the Staff Editor at Dark Reading, where she focuses on cybersecurity news and analysis. She is a business technology journalist who previously reported for InformationWeek, where she covered Microsoft, and Insurance & Technology, where she covered financial ... View Full Bio
We welcome your comments on this topic on our social media channels, or [contact us directly] with questions about the site.
Comment  |
Email This  |
Print  |
RSS
More Insights
Webcasts
Bolstering Your Enterprise Cyber Risk Assessment
Monitoring Critical Cloud Workloads
More Webcasts
White Papers
Research from STL Partners and Vertiv Reveals Why Telcos Should Prioritize Efficiency and Sustainability in 5G Network
Automate Your Cloud Compliance Journey in 6 Steps
More White Papers
Reports
The State of Malware Threats
2021 Digital Transformation Report
More Reports