The past several days have been hectic in Redmond as Microsoft launched a new workflow app, several Office updates, and previews for both the Windows 10 SDK Anniversary Update and Skype for Business on Mac.

Up first, Windows 10. Microsoft this week released Windows 10 Windows Insider preview build 14332, which is giving Fast ring testers a look at the Anniversary Update expected to launch this summer.

This build rolled out less than one week after Build 14328, which was released last week.

Build 14332 brings improvements for Bash and Command Prompts, the option to search Office 365 using Cortana, and better battery life for PCs on connected standby. It also delivers a wealth of fixes to Insiders on PC and Mobile, but as always, Insiders should be wary of known issues.

[Read: Microsoft, HPE Back Mesosphere as It Open Sources DC/OS]

This build also gave Insiders a new way to squash bugs through a different process for Quests in the Feedback Hub. It's trying a new, more open-ended method so it receives a broader range of bug reports, and so users can perform steps that come naturally to them in order to complete the Quest.

There are a few types of Quests users can access to squash bugs. One, "Limited Time," limits Insiders to a 24-hour time period for tackling a problem after it has been published. Another "Advanced" Quest requires Insiders to know how to change the system configuration on their device, and change it back after the Quest is complete.

Microsoft launched a new promotion for its Lumia 950 and Lumia 950 XL through which customers receive a free Lumia 950 when they purchase the larger premium phone. The promotion followed a disappointing earnings call that brought news of a sharp smartphone decline.

Despite plummeting sales, Microsoft isn't giving up on Windows 10 Mobile. Terry Myerson, executive vice president of the Windows and Devices Group, sent a memo to Microsoft executives and partners this week reaffirming its commitment to the mobile platform and stating it will support Windows 10 Mobile "for many years."

Other mobile news includes the availability of Microsoft's Word Flow keyboard for iOS. Office Lens was updated on iOS and Android. OneDrive was updated to include new features on Windows, iOS and the Web, such as the lasso tool for selecting and arranging content on iPad.

It was also a big week for Office news.

Microsoft rolled out the preview for Skype for Business on Mac, which will be released in three cumulative stages and become publicly available in Q3 2016. Users can view and join meetings in the initial release, but additional features like a contact list and chat, audio and video calls will come in future releases. 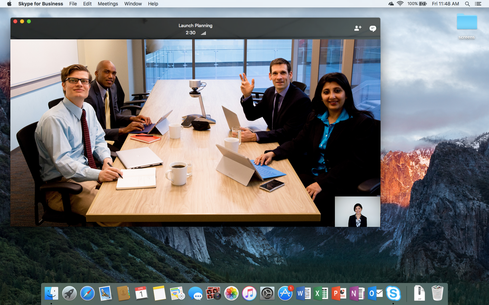 Office 365 users can also create external groups within Yammer to collaborate outside their teams and businesses. The external groups are similar to the internal groups, but participants can chat around documents and links that can extend to customers and outside parties.

Microsoft began the public preview for a new mobile app called Flow, which is similar to If This Then That, an app that allows users to connect other apps and automate processes between them.

Flow makes it easier to connect more than 35 services, ranging from Microsoft services like OneDrive and SharePoint to outside apps like Slack, Twitter, and Salesforce. For example, you can use it to create a "flow" that automatically copies files from a OneDrive for Business folder to your team's SharePoint site.

This was also a noteworthy week for competitor news. Gmail for Android was updated to include support for Microsoft Exchange. Dropbox announced Project Infinite, a feature that provides access to all of an organization's files, from any desktop, regardless of hard drive size. This is similar to "placeholder files Microsoft previously offered in OneDrive, but eliminated in Windows 10.

Kelly Sheridan is the Staff Editor at Dark Reading, where she focuses on cybersecurity news and analysis. She is a business technology journalist who previously reported for InformationWeek, where she covered Microsoft, and Insurance & Technology, where she covered financial ... View Full Bio
We welcome your comments on this topic on our social media channels, or [contact us directly] with questions about the site.
Comment  |
Email This  |
Print  |
RSS
More Insights
Webcasts
Fintech at SaaS speed: Navigating the scale & security challenge
Bolstering Your Enterprise Cyber Risk Assessment
More Webcasts
White Papers
Automate Your Cloud Compliance Journey in 6 Steps
Best Practices Guide to Containers/ Kubernetes Security
More White Papers
Reports
A Decade of Passive DNS
[Report] 2021 State of IT & SecOps
More Reports