Microsoft will launch Windows 10 this summer in 111 languages across 190 countries.

After months of speculation among Windows watchers, Microsoft has confirmed a release date for Windows 10. Though an exact day was not specified, the OS will launch sometime during the summer of 2015.

This news is the latest in a series of announcements about the platform and is expected to address the many shortcomings evident in Windows 8. We learned just this week that Internet Explorer will fade into the background for most users, and eventually traditional password authentication will go the same route.

Now, Microsoft's Terry Myerson has confirmed a specific window for its release. "We continue to make great development progress and shared today that Windows 10 will be available this summer in 190 countries and 111 languages," he said at the renewed Windows Hardware Engineering Community (WinHEC) summit in Shenzhen, China.

We first learned about the details behind Microsoft’s newest operating system in January, when officials shared the new features it will include such as universal apps and Cortana for desktop. Since then, Microsoft has released both mobile and desktop preview builds in addition to updates on a Windows 10 flagship phone, a new Office suite, and regarding how the OS will affect the enterprise.

Windows 10 will be available as a free upgrade to the millions of customers currently running Windows 7, Windows 8, Windows 8.1, and Windows Phone 8.1 for the first year following its launch, another detail that Myerson reconfirmed in a blog post on the news.

Microsoft has also announced new partnerships with tech companies, including Lenovo and Tencent, to improve the Windows 10 upgrade experience for its customers in China, which has hundreds of millions of PCs running Windows. 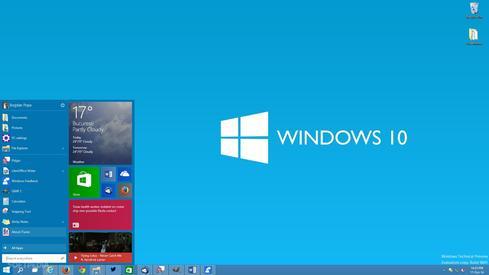 Lenovo will offer Windows 10 upgrade services through 2,500 service centers and certain retail stores upon its summer release. The company also confirmed plans to build Windows phones, which will roll out mid-2015 through China Mobile.

Tencent, a Chinese social networking and gaming company, will offer upgrades to Windows 7 and Windows 8.1 customers in a free Windows 10 "upgrade pack" that will include its flagship QQ app, Tencent Video and Tencent PC Manager. It also plans to introduce a Windows 10 universal app for QQ, in addition to popular PC games, on the new OS and Windows store.

Microsoft also noted that its partnerships with organizations such as the Raspberry Pi Foundation, Qualcomm, and Intel will bring new capabilities to commercial device builders, students, and hobbyists venturing into the Internet of Things. Windows 10 will bring new versions of Windows to a range of IoT devices, from ATMs to ultrasound machines, for free.

Kelly Sheridan is the Staff Editor at Dark Reading, where she focuses on cybersecurity news and analysis. She is a business technology journalist who previously reported for InformationWeek, where she covered Microsoft, and Insurance & Technology, where she covered financial ... View Full Bio
We welcome your comments on this topic on our social media channels, or [contact us directly] with questions about the site.
Comment  |
Email This  |
Print  |
RSS
More Insights
Webcasts
What We Can Learn from Sports Analytics
How Elite Analyst Teams are Transforming Security with Cyber Reconnaissance
More Webcasts
White Papers
The Value of Threat Intelligence
The Trouble with Phishing
More White Papers
Reports
Are Unprotected Cloud Databases Leaking Your Data?
2021 Top Enterprise IT Trends
More Reports

Hey it's free, so why not? I'm excited for the upgrade. I'm running the technical preview on a Surface Pro 3, and I'm a fan so far. Especially of the feature that brings it from desktop to tablet mode when the keyboard is detached - pretty handy.
Reply  |  Post Message  |  Messages List  |  Start a Board

Unless your computer doesn't have the minimum system requirements, what will be the reason of not to upgrade?
Personally, I'm gonna install Win10 in all my computers. I just bought a new hard drive for one and some RAM for another.
Reply  |  Post Message  |  Messages List  |  Start a Board

@whoopty I think you're right here. Windows 8 probably turned a lot of users away from Microsoft, and the company is going to have to make some sacrifices if they want people to use Windows 10. That's why i think they're offering the free upgrade. After that, subscriptions will generate revenue.
Reply  |  Post Message  |  Messages List  |  Start a Board

A big chunk of its money will come from selling subscriptions to the likes of Office 365 and other branded software.

Really, what this generation of Windows seems likely to be, is Microsoft's attempt to get people using its latest and greatest again. It's suffered in recent years with the XP and Windows 7 hangers on and with piracy as rife as it is in China, it just wants everyone using its best and most updated products, so that the experience they have with them is strong.

Rather than malware riddled messes that fail all the time, pushing people ever further away from Microsoft.
Reply  |  Post Message  |  Messages List  |  Start a Board

How does Microsoft intend to make money on all of this if they are giving away Windows for free? Sure, I get that Apple can do this because they have a grip on all the hardware that runs their software. But Microsoft doesn't have that luxury.

What does Microsoft's revenue picture look like when it's no longer charging for Windows?
Reply  |  Post Message  |  Messages List  |  Start a Board
Editors' Choice
Hot Topics