The next two years will bring accelerated adoption of Windows 10 and new devices within the enterprise, which could help the overall PC market, according to new analysis from Gartner.

The next couple of years will bring accelerated adoption of Windows 10 within the enterprise, IT research firm Gartner recently reported. At least 50% of businesses will have started deploying the new OS by early 2017 with anticipated completion in 2019.

This shift toward Windows 10 means a good deal of changes for IT departments, as businesses demand a faster adoption. Plus, the new OS means that new types of hardware will enter the corporate network.

"Companies are very aggressive in their approach in moving to Windows 10," said Steve Kleynhans, vice president of Gartner's mobile and client computing group, in an interview with InformationWeek. "More than half will have started production rollouts by the end of 2016, significantly faster than they've ever done before."

The growth may spark some much-needed activity in the sluggish PC market. Businesses in the initial stages of Windows 10 rollout will generally want to deploy the OS on new equipment.

[Microsoft's Cortana is now ready for iOS and Android smartphones.]

Kleynhans explained there is a "pent-up demand" for new devices among businesses. Many organizations have wanted to adopt machines that have been released over the last few years, particularly hybrid convertibles, but have refrained from purchasing them.

Why? Those new devices brought Windows 8, which enterprises were "unprepared and unwilling to integrate," he continued. Now certain business systems and processes depend on getting new machines, and these will be the first systems we see rolling out on Windows 10.

While hybrid devices may be on some organizations' shopping lists, it will be a while before we see the widespread rollout of hybrid computers within the enterprise.

"It's not going to be the big fleet purchase that [businesses] buy for everybody," Kleynhans predicted. Most hybrids are on the high end of manufacturers' product portfolios, he said, and only well-financed organizations would opt for widespread deployment in the near term.

The majority of businesses are likely to begin hybrid distribution among "real road warriors" who have greater need for highly portable PCs. This will change as PC makers begin extending the hybrid design into more aspects of their product lines.

As the prices of hybrids decline, businesses will be able to invest in more of them. This is unlikely to happen in 2016, said Kleynhans, but it's a possibility for 2017.

The heightened demand for new PCs isn't the only factor contributing to rapid Windows 10 adoption. Business are also motivated to avoid past mistakes by preparing for the end-of-life deadline for Windows 7 in January 2020.

Most companies have realized they moved too slowly when it came time to upgrade from Windows XP, and the lag resulted in an expensive migration. Now that Windows 7 has a definite end date, they want to start Windows 10 deployment early and upgrade in a more measured and controlled way. 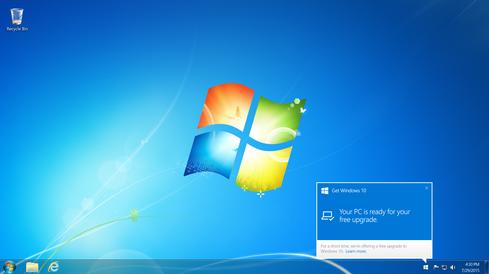 Organizations also want to begin Windows 10 deployment so they can continue with projects that were started and stalled on Windows 8. The earlier they roll out the OS to small groups, they sooner they can "break the logjam" and continue with upgrades after resolving initial problems with the first group of Windows 10 users.

In his conversations with different companies, Kleynhans discovered many decided to deploy Windows 10 because a CIO, or other high-ranking employee, had installed the OS on their own and discovered how it worked. For many, this sparked a "we should get going faster" mentality.

As they deploy the new OS, companies' biggest challenge will be the accelerated pace of change. Windows 10 will cause them to develop new processes and rethink how they service and patch systems.

The benefit to Windows 10 is you don't have to worry about big upgrades once the system is downloaded, said Kleynhans, but companies will have to face several smaller updates along the way.

"Companies haven't had to do that before for PCs," he continued, noting the upgrade will cause some significant adjustment.

Kelly Sheridan is the Staff Editor at Dark Reading, where she focuses on cybersecurity news and analysis. She is a business technology journalist who previously reported for InformationWeek, where she covered Microsoft, and Insurance & Technology, where she covered financial ... View Full Bio
We welcome your comments on this topic on our social media channels, or [contact us directly] with questions about the site.
Comment  |
Email This  |
Print  |
RSS
More Insights
Webcasts
How Elite Analyst Teams are Transforming Security with Cyber Reconnaissance
Strategies for Success with Digital Transformation
More Webcasts
White Papers
A Technical Deep Dive on Software Exploits
2020 Threat Hunting Report
More White Papers
Reports
2020: Threats in Review
How Data Breaches Affect the Enterprise (2020)
More Reports

A business is in the middle. At the up-line are the Microsofts, HPs and Dells, etc., of the world that deliver businesses with cutting-edge technology to increase productivity and efficiency. At the down-line are the eBays, exporters, data disposal services and metal recycling/disposal firms of the world that deliver the residual value of the equipment to businesses. If a business manages to create strong partnerships throughout the chain then, great things can happen. However, if the link is weak at either end then, keeping up with the pace of technology will always remain a challenge.

If the link is strong, a business can plan and execute a roadmap to upgrade the environment perfectly. For example, the business will know that new equipment will be available in 2016/17/18... At X amount and the expected residual value of their old equipment is Y amount at time 2016/17/18.... The total cost will always be X-Y=Z
Reply  |  Post Message  |  Messages List  |  Start a Board
Editors' Choice
Hot Topics