Windows 10 For Xbox Adds To 'One Microsoft' Vision - InformationWeek

Microsoft has announced plans to tie Xbox into its Windows 10 ecosystem with a September preview and November launch.

Beyond Windows 10: 6 Microsoft Releases To Watch
(Click image for larger view and slideshow.)

Microsoft had a major presence this week at Germany-based video game conference Gamescom, where it announced a slew of new features for its Xbox One console.

Xbox, which currently runs on Windows 8, will be updated later this year with Microsoft's new Windows 10 OS. The update is a boon to Xbox users, but also another step towards Redmond's "One Microsoft" strategy.

Part of Microsoft's goal for Windows 10 is to deliver a consistent experience to users across PC, tablet, and smartphone devices. This means a single core Windows 10 system connected by one Windows Store and Universal Windows apps.

Xbox will become part of the lineup later this fall, when Microsoft integrates features from Xbox Live and Xbox experiences into the Windows 10 ecosystem. Gamers will receive the upgrade for free through regular system update.

As Microsoft explained earlier this year, the Windows 10 update will bring your gaming activity to a range of devices. The Xbox app will make features like Messages, Games, Friends, Activity Feed, and Achievements available on the PC.

A preview version of Windows 10 for Xbox One will be made available in September. Microsoft will launch the system to all consoles in November, giving developers a couple of months to receive and integrate feedback from its user base. Through Xbox Live, you'll be able to have multiplayer gaming on Windows 10 against other players on Xbox One.

Here are a few additional features you can expect to see when the Windows 10 system upgrade arrives on Xbox One consoles later this year:

Cortana is a primary feature in Windows 10, so her expanded presence on Xbox isn't a big surprise. The "personal gaming assistant" will work across Windows 10 PCs, smartphones and tablets to help you find new games, meet new friends and challengers on Xbox live, and discover videos and information to help you boost your game. Cortana is designed to get smarter over time and help you with non-gaming tasks like setting reminders. 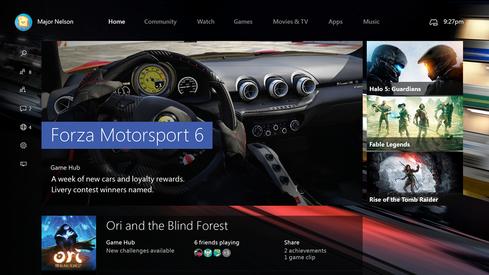 You'll be able to access different aspects of Xbox like friends, notifications, messages, and invitations from the new Home page (by scrolling left) or from within a game (by double-tapping the Xbox button).

To improve the social aspect of Xbox gaming, Microsoft has built upon the Friends section. It's promising faster and easier access to updates from friends and developers on the Activity Feed, and interaction with popular games and content on Xbox Live.

Based on users' excitement about Xbox Avatars, the team has decided to emphasize them more in Xbox One. Avatars will have better image quality and the popular customizations on Xbox 360.