Microsoft has released the technical preview for Windows 10 desktop to Insiders. Here's how to sign up and what to expect.

Microsoft has released the latest desktop build for Windows 10, which many observers expected to launch shortly after the company's recent announcements of the new OS features. Starting Friday, those who are members of the Windows Insiders program can test the new system but will not see all the features that were unveiled during the Redmond press conference.

Those who haven't signed up for the Insider program can still do so. The Insiders are users who are reviewing Windows 10 over the course of its development and providing Microsoft with feedback.

The newest preview, also known as Build 9926, is available to both "Fast" and "Slow" rings, as well as on ISOs. In a blog post on the updates, Microsoft notes that the wait time between builds will be shorter from here on out.

Here are a few of the features Insiders can expect to see in the build:

Cortana
Microsoft's personal digital assistant is now available on the desktop and can assist with queries for apps, files, and settings, as well as Internet searches. Users can test Cortana with voice by clicking the microphone icon, or they can enter Cortana Settings and opt for hands-free access. Cortana's Notebook can be used to store interests such as sports, news, and finance so the assistant can provide recommendations for future searches and learn users over time. For this build, Cortana is only available in English but the search function will work in all languages. 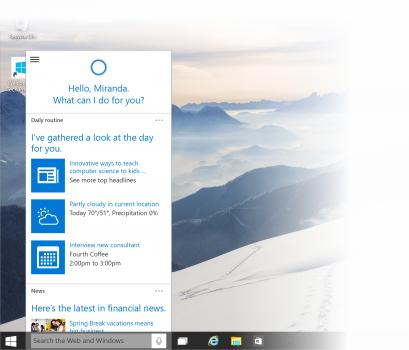 New Start Menu and Settings
The revamped Start menu can be shown in full screen and in a variety of colors. Future builds will have the Start menu in XAML, a type of code used by Windows 10 app developers. The Settings app has been redesigned to resemble the icon-based Control Panel. Settings will be consistent across all Windows devices.

[Windows 10 is coming to mobile in February.]

Windows Store beta
Visible as a gray tile in the Start menu (the current Windows store is in green), the new Windows Store has a redesigned interface that will appear the same across phones, tablets, PCs, and the Web. Users will have basic functionality in this build but can browse, search, and download apps. They cannot access in-app purchases through apps downloaded in Store Beta, nor can they purchase additional in-app content.

New Photos and Maps apps
The new Photos app will display and enhance photos locally stored on the PC and OneDrive. Users can also edit photos but some features, such as the ability to create albums, aren't ready yet.

Xbox app
Those excited about the Xbox app can give it a try in this build.

Good to hear that you're having success with testing it out - and that it seems like Windows 10 is an improvement from Windows 8. The hybrid Start menu may be a bit much. Could be that they're trying to gain everyone's opinion on that and choose one option for the final release.
Reply  |  Post Message  |  Messages List  |  Start a Board

As someone who's also pretty excited about the new OS to come, I'm disappointed to learn about the problems that people are having with it. Perhaps it's less functional on Surface devices right now, so some people are having more success than others. Hopefully they get the kinks smoothed out soon so more people can test.
Reply  |  Post Message  |  Messages List  |  Start a Board
InformationWeek Is Getting an Upgrade!