Microsoft this week debuted Outlook.com, group video calls on Skype for iOS and Android, the Lumia 650, and several new features on Windows 10.

Microsoft's news cycle this week delivered updates on Lumia, Outlook.com, Microsoft Translator, and the growth and new features of Windows 10.

The new OS got a major boost when the US Department of Defense (DoD) announced plans to upgrade 4 million PCs to Windows 10. The Secretary of Defense has instructed DoD agencies to begin immediate upgrades to laptops, desktops, and mobile devices running legacy Windows.

This project is intended to lower IT costs, streamline IT operations, and improve security for an organization that already spends $44 billion each year to protect against cyber-attacks. The DoD aims to finish the rollout by February 2017.

[Microsoft published a patent app for a modular PC design.]

Windows Insiders in the Fast ring received preview build 14267. Unlike the last few preview builds, which primarily focused on minor bug fixes, this one both addresses errors and introduces new features.

Some of these updates include a music search icon in Cortana and an option to add photos to Skype messages. Microsoft Edge now has an updated favorites bar, and you can choose to clear your browser history upon exit.

On the mobile front, Microsoft this week launched its $200 Lumia 650 smartphone. The Windows 10 Mobile device is aimed at enterprise users who want a business-friendly tool but don't want to splurge on a premium phone.

The Lumia 650 has Microsoft's Office apps and Cortana pre-installed, with a one-click setup for Office 365. It also lets IT pros test software updates against line-of-business systems and apps, so they can ensure everything looks good before deploying to end-users.

Mobile app updates include the launch of free group video calls on iOS and Android, which will be globally available by March. Group calls are in HD and can handle a maximum of 25 people. Skype notes participants can be added via unique links, even if they aren't Skype account holders.

The Microsoft Translator apps for iOS and Android have been updated with new features for offline translation and image translation.

Its Android app has been updated with a Deep Neural Network-powered offline engine. This will bring deep learning, the machine-learning technology from Microsoft Translator, to people who cannot access the Internet in remote parts of the world.

The iPhone app now includes an image translation feature, otherwise known as Optical Character Recognition (OCR). iPhone users will be able to translate text stored in their camera roll rather than typing or speaking out loud. 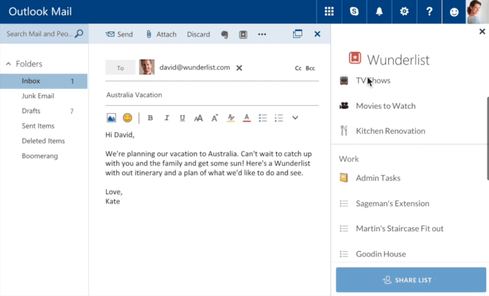 Outlook.com exited preview mode this week. The email service is powered by Office 365 and comes with many of the same features, including the option to automatically add flights to your calendar, and a smart address book designed to recognize your frequent contacts.

Other features include the abilities to view and edit documents in Word, PowerPoint, and Excel while replying to a message, move Wunderlist lists to email, and @Mention people in messages. You will also see prompts to re-attach files from previous messages.

With Outlook.com as part of the Office 365 platform, Microsoft promises more frequent and consistent features will roll out in the future. Improved Skype integration is one capability reported to be on its way.

Kelly Sheridan is the Staff Editor at Dark Reading, where she focuses on cybersecurity news and analysis. She is a business technology journalist who previously reported for InformationWeek, where she covered Microsoft, and Insurance & Technology, where she covered financial ... View Full Bio
We welcome your comments on this topic on our social media channels, or [contact us directly] with questions about the site.
Comment  |
Email This  |
Print  |
RSS
More Insights
Webcasts
Monitoring the Invisible - Digital Experiences in a Zero Trust World
Leveraging Infrastructure as Code to Streamline Security & Operations
More Webcasts
White Papers
Enterprise Guide to Policy as Code - Design, Build, and Runtime
How to Build Your Incident Response Plan
More White Papers
Reports
Gartner's Top 9 Security Trends in 2020
Are We Cyber-Resilient? The Key Question Every Organization Must Answer
More Reports