News from Microsoft this week includes plans to bring cables under the Pacific, new Windows 10 Editions, and the latest Windows 10 mobile build.

If you're not a fan of the "Windows 10" name, don't hold your breath for Microsoft's next major OS release. The company has confirmed that the upcoming OS will be its last. Microsoft will continue to deliver updates to Windows 10, but those will be in the form of smaller incremental fixes rather than large product launches.

While a huge shift for the company, this wasn't the only news out of Redmond this week.

Early this week we learned about Microsoft's latest major cloud-focused initiative. For the past nine months, it has been investing in fiber partnerships that span oceans and continents. The ultimate goal is to boost cloud capacity.

In a partnership among Microsoft, Hibernia, and Aqua Comms, each company will connect a high-speed data cable from Microsoft's data center infrastructures in North America, Ireland, and the UK. Microsoft is also part of a consortium composed of China Mobile, China Unicom, China Telecom, Chunghwa Telecom, and KT Corp. It hopes this project will enable faster data connections at lower cost.

This week we also got a handy guide for common commands on Microsoft' Hyper-V virtual environment. The Hyper-V tools are used to virtualize hardware in order to create an environment that enables users to process multiple operating systems at the same time on a single computer or physical system.

Professionals eager to use Skype for Business will be happy to learn of positive reviews on Microsoft's newly rebranded communication service. Research indicates that 52% of 540 surveyed IT professionals have adopted Skype for Business. Of the respondents, 63% considered the voice quality better, and 90% thought it "better" or "much better" than their legacy systems.

We also learned about the widespread availability of Skype Translator, a relatively new feature in Skype that lets users chat in their native languages while their friend/family member/colleague receives translated messages in real time. Microsoft expanded its preview of the service for anyone to try, Neowin reported.

Wednesday brought more updates on Windows 10. Even though Windows 10 will deliver Universal Windows apps that share a similar code base, it will also arrive in a variety of editions to suit the needs of Microsoft's various user groups. 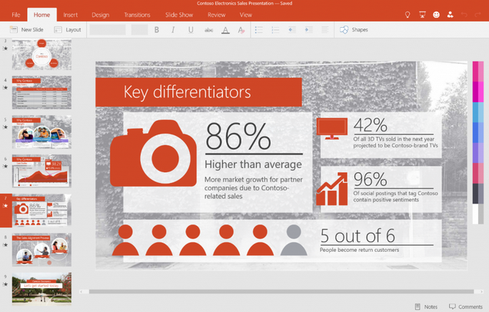 Speaking of Windows 10, Microsoft released a new Windows 10 Mobile update this week to a broader variety of Windows Phones. Officials noted that even though Windows 10 will arrive on desktops before it's available for smartphones, the underlying OS code will be the same across both desktops and phones.

Windows Insiders in the Fast ring who download the preview will get a first look at Windows Store Beta for phones and new apps for Camera, Music Preview, Video Preview, and Xbox. This build will also deliver the Universal Office apps in preview later this month. Insiders should proceed with caution, as the build comes with bugs.

Speaking of rollouts, Microsoft also released its Hyperlapse video technology, which is designed to use speed for making long videos more compressed and exciting. Hyperlapse, which applies the concept of timelapse to long videos, can be used to streamline old or new clips. It's available on Windows Phone and in preview on Android devices. A Pro version is available for preview on desktops.

Kelly Sheridan is the Staff Editor at Dark Reading, where she focuses on cybersecurity news and analysis. She is a business technology journalist who previously reported for InformationWeek, where she covered Microsoft, and Insurance & Technology, where she covered financial ... View Full Bio
We welcome your comments on this topic on our social media channels, or [contact us directly] with questions about the site.
Comment  |
Email This  |
Print  |
RSS
More Insights
Webcasts
Making XDR Work in Your Enterprise - May 12
Data Center Network Operations (NetOps) Reimagined
More Webcasts
White Papers
Global software company contracts with CBTS for Virtual CISO
Improve your business with a Virtual CISO
More White Papers
Reports
A Decade of Passive DNS
Intelligent Outcomes Are Key to Business Resilience
More Reports