Microsoft rolls out Windows 10 Insider preview builds for mobile and PC, and shares its upgrade delivery strategy for 2016. 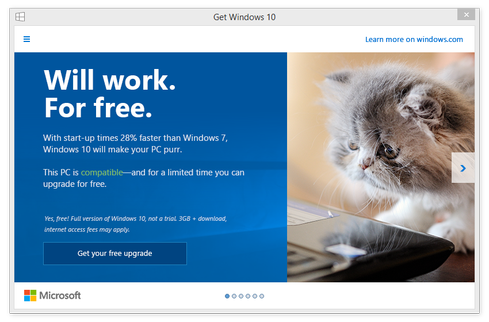 Windows 10 has been downloaded on more than 110 million PCs and more than 8 million business devices since its public rollout in July 2015.

That's strong progress for its first three months of general availability, but Windows 10 has a long way to go before hitting Microsoft's goal of one billion devices by July 2018. Additions to its Windows 10 device lineup will help but aren't likely to finish the job.

As a result, Redmond is getting more aggressive with its Windows 10 distribution strategy in order to deliver the OS to a broader audience. Terry Myerson, executive VP of Windows and Devices, described in a blog post the details of a new automatic download process for consumers and small businesses.

The original upgrade process required two steps: Users first requested a reservation and then received an upgrade notification at a later time. This is now a thing of the past.

[ Surface Pro 4: What are the critics saying? ]

Microsoft will soon begin to push Windows 10 as an "Optional Update" via Windows Update for users running Windows 7 and Windows 8.1. For optional updates, users have to select the option to install the upgrade on their own.

Starting in early 2016, Windows 10 will be re-categorized as a "Recommended Update" in Windows Update. Here's where it starts to get sticky. "Depending upon your Windows Update settings, this may cause the upgrade process to automatically initiate on your device," wrote Myerson.

However, PC users will be prompted to continue the upgrade before their OS is changed. Those on a metered connection on Windows 7 or Windows 8.1 have the option to disable automatic updates, though Myerson doesn't recommend this because it runs the risk of missing security fixes.

Myerson reminds readers that if they don't like Windows 10, they have the option to roll back to their former OS within 31 days of their upgrade.

The upcoming distribution change is one of multiple Windows 10 updates to arrive this week. Microsoft also announced plans to change the upgrade process for non-genuine versions of Windows 7 and Windows 8.1, and rolled out new builds for Windows Insiders running the previews for Windows 10 and Windows 10 Mobile.

Read on for more details on what's new in Windows 10 this week. What do you think of the new upgrade strategy? Will you be downloading either of the preview builds? Share your plans in our comments section below.