News of an executive shakeup at Microsoft comes the same week as new Windows 10 Mobile build 10136.

While Microsoft's week usually focuses on technology, such as Windows 10, this week saw a large corporate shake-up that pushed Stephen Elop out the door as Redmond looks to revamp its mobile strategy. First, let's talk games.

Microsoft's week kicked off with a presence at LA's Electronic Entertainment Expo (E3), which wrapped up over the past few days. We learned a bit about why gamers should be excited about HoloLens, Redmond's augmented reality headset.

Attendees saw Microsoft officials demo a new holographic edition of Minecraft designed specifically for HoloLens. One played while wearing HoloLens, while another joined in on a Surface. Spoiler alert: It's really cool.

Microsoft also announced this week that the beta version of Skype for Web is available worldwide. The Web-based client beta version was released to users in the US and UK about ten days ago so that callers can use Skype from their browser without having to download the app.

Windows Insiders running the Windows 10 Mobile preview were happy to learn this week that Build 10136 has arrived for the Fast ring of testers. While this build requires a complicated upgrade process (you have to revert to Windows 8.1 to get it), those who download 10136 can test the sleeker UI and feature improvements.

The latest Windows 10 Mobile preview promises improvements to Cortana, which Microsoft claims is "very close to our final design." Insiders can also expect to see enhanced capabilities for the Photos and Camera apps, as well as plenty of design changes. One-handed use has gotten much better: By pressing the Start button, you can cause the screen to slide up and down so that apps are more accessible.

Microsoft writes that there are a few known issues in Build 10136, including duplicate tiles for certain apps under the All Apps space. Skype may not work after the upgrade, and the "enter A1B2C3" reset may not work after too many attempts to unlock via PIN.

This week brought the aforementioned good news to Windows Phone users and some bad news for Android fans. In its original announcement on Cortana's development for iOS and Android, Microsoft had promised that the digital assistant would be available on Android by the end of June, and for iOS later this year. Now it looks like the beta version of Cortana won't be available on Android until July, as reported by Microsoft in a blog post on Xbox One. 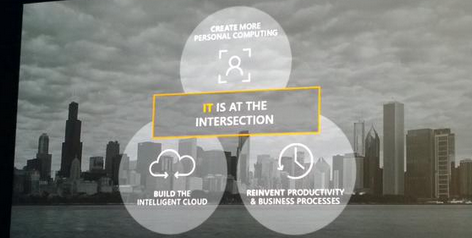 As part of the reorganization Microsoft has combined its Microsoft Devices Group and Operating System Group under a single division called the Windows and Devices Group. Executive Vice President Terry Myerson will lead the division in improving the user experiences on devices including Lumia, Surface, Microsoft Band, HoloLens, and Xbox.

Later in the week Microsoft announced new Intune capabilities for Outlook on iOS and Android. Customers using Outlook for the two platforms can now use built-in MDM for Office 365 or Intune for better email data security within the enterprise.

In other security news, Microsoft also informed us that Bing search traffic will be encrypted by default starting this summer. For a year and a half, users have had the option to encrypt Bing traffic. As a result of this update, you'll see more Bing traffic originating from https://www.bing.com (protected searches) instead of http://www.bing.com (unencrypted).

Kelly Sheridan is the Staff Editor at Dark Reading, where she focuses on cybersecurity news and analysis. She is a business technology journalist who previously reported for InformationWeek, where she covered Microsoft, and Insurance & Technology, where she covered financial ... View Full Bio
We welcome your comments on this topic on our social media channels, or [contact us directly] with questions about the site.
Comment  |
Email This  |
Print  |
RSS
More Insights
Webcasts
Unifying Your Endpoint Security Strategy
Managing Your Enterprise Collaboration Platforms
More Webcasts
White Papers
Formulating a Robust Pivoting Methodology
Why DLP Has Failed and What the Future Looks Like
More White Papers
Reports
Forrester Total Economic Impact Study: Team Cymru Pure Signal Recon
Defending Against Critical Threats
More Reports