Microsoft news from this week included a new build of Windows 10 for phones and details on a major Windows 10 update in 2016.

Last weekend, former Microsoft CEO Bill Gates wrote an email to employees in celebration of the company's 40th birthday. The past four decades have been dotted with great successes and not-so-great disappointments, but Gates seems optimistic about the future ahead.

And with good reason -- middle age doesn't seem to be slowing Microsoft one bit. We got our usual host of updates from Redmond this week, running the gamut from Windows 10 updates to Office 365 security fixes.

It looks like Microsoft might be the next player jumping into the mobile payments game. Back in February, the company submitted an application to be licensed as a money transmitter in all US states. The application, discovered by banking consultant Faisal Kahn, indicates that Microsoft is planning its own mobile payments platform, reports Ars Technica.

Though the news surfaced this week, it's too early for Microsoft to confirm the existence of a payment system. A spokesperson for the company noted that "becoming a money service business gives us the flexibility to provide new, innovative cloud services to our customers but we do not have any product announcements at this time."

We also learned about the first details regarding a major update to Windows 10 expected to roll out in 2016. The project, currently codenamed Redstone, has been confirmed to Neowin by two internal sources at Microsoft.

The first version of Redstone for Windows 10 will reportedly launch in June 2016, with another version following in October. Both will be more significant than the minor updates coming to the new OS, but not large enough to warrant a "Windows 11" name change. It has been suggested that Redstone will provide necessary support for devices not included in Windows 10 upon its launch, such as HoloLens and Surface Hub.

Office 365 got a security update on Wednesday, when Microsoft announced Advanced Threat Protection (ATP) for Exchange Online. The current version of Exchange Online Protection (EOP) protects against spam, viruses, and malware, but the update is designed to act as an advanced filtering service to block specific types of advanced threats.

ATP will reportedly provide protection from unknown viruses and malware, reporting and URL trace capabilities, and real-time safeguarding against malicious URLs. It's currently in private preview and is expected to roll out as an optional service for Office 365 commercial customers this summer.

On Thursday, we learned that Microsoft will be strengthening its relationship with Dropbox by adding further integration to Office Online. As part of this update, users will be able to update Word, Excel, and PowerPoint files located within Dropbox directly from their browser through Office Online.

From within Office Online, users will be able to access their Dropbox account, save new files, or open existing Dropbox files without exiting the online productivity suite. This in-depth integration is available for Dropbox for Business users with an Office 365 license, in addition to Dropbox Basic and Pro customers. 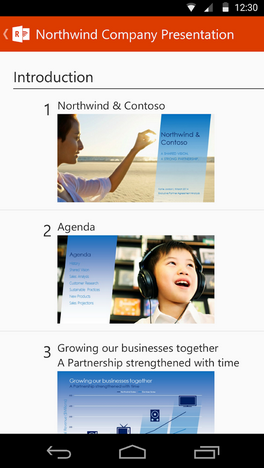 We got another Office-related update when Microsoft announced Office Remote for Android. The app lets users control apps like Word, Excel, and PowerPoint on PCs directly from their smartphone. This announcement shortly follows the announcement of Office Lens for iOS and Android, another instance of Microsoft releasing its products on Apple and Samsung devices.

Windows Phone users got a pleasant surprise to end their week as Microsoft delivered the newest build of Windows 10 for phones. This build brings in an early version of Project Spartan in addition to updated Mail, Messaging, People, Calendar, and Maps apps. It's available on a much wider range of Windows Phones.

Kelly Sheridan is the Staff Editor at Dark Reading, where she focuses on cybersecurity news and analysis. She is a business technology journalist who previously reported for InformationWeek, where she covered Microsoft, and Insurance & Technology, where she covered financial ... View Full Bio
We welcome your comments on this topic on our social media channels, or [contact us directly] with questions about the site.
Comment  |
Email This  |
Print  |
RSS
More Insights
Webcasts
Securing and Monitoring Networks in the 'New Normal'
What We Can Learn from Sports Analytics
More Webcasts
White Papers
The Value of Threat Intelligence with DomainTools: Identify Threats 82% Faster
The Essential Guide to Securing Remote Access
More White Papers
Reports
Special Report: Edge Computing: An IT Platform for the New Enterprise
The Drive for Shift-Left Performance Testing
More Reports

One really has to hope that Win 10 is a big improvement over Win 8.x. MS has to feel the pressure when so many people will not upgrade because the o/s is so terrible and they stay on XP or Win7. If my Win7 computer died now, i would try to get one with Win7 or, failing that, go to Apple.
Reply  |  Post Message  |  Messages List  |  Start a Board

@tjgkg You're not alone. I read recently that the number of Win8 users is still very small in comparison to the number of people still using 7/XP. Fingers crossed that your Win7 computer holds on until 10 launches this summer
Reply  |  Post Message  |  Messages List  |  Start a Board

I don't want "8" or "8.1", and I won't want "10" or "11" either. I'm not a developer, so there is no need for me to have the latest operating system, and more and more of what I do is on the cloud, so what is or is not sitting on my desk is less and less relevant. Microsoft has made it difficult to buy new computers with "7" installed, so I buy reconditioned machines with "7" instead. How much longer will it be until someone capitalizes on this building resentment and comes up with a competing operating system that will be accepted by all? C'mon, Google!!
Reply  |  Post Message  |  Messages List  |  Start a Board

@Gary_EL      I have done the same.  Funny I was working with that vintage windows 7 laptop the other day and had to wipe it clean.   Reinstalled from scratch, only to find 100 plus updates waiting for me !   Really Microsoft, really ?

@Kelly22: So far my home and work computers are holding up with Win7! I really have yet to find anyone who thinks the WIn 8.x platform is good. And I work in IT! Glad that the number of Win 8.x users is low. Even better is that companies like HP and Dell are still offering Win 7. That really is an indictment as to how bad Win 8.x is. My friend is testing an RC version of Win 10 and he says it is very good.
Reply  |  Post Message  |  Messages List  |  Start a Board

My company has a standard configuration based on Win 7. Works very well. The big problem is when a vendor with Win 8.x comes in. Then things get difficult. Simple things like conecting to wi-fi are very difficult and since IT does not support 8.x, they don't get involved. This is a major issue.
Reply  |  Post Message  |  Messages List  |  Start a Board

Most people I know running Windows are still on 7; guess they heard all the backlash about Win 8.x before they downloaded. I only know a couple of people who like Win 8 and one is a college student using it on a touchscreen - far from your average enterprise user. I'm also running Windows 10 now and it's working great for me so far. With the last technical preview, it's shaping up to be a great OS.
Reply  |  Post Message  |  Messages List  |  Start a Board

That is great to hear. I knew a couple of folks running Win 8.x on a touch screen notebook and while the touchscreen was a cool feature, the o/s was not. It just is so difficult to navigate and unintuitive. My teenage daughters have it on their laptops and don't like it either so this is a cross generational issue! At least we have Win 10 to look forward to.
Reply  |  Post Message  |  Messages List  |  Start a Board
Editors' Choice
Hot Topics

10 IT Trends to Watch for in 2021 Cynthia Harvey, Freelance Journalist, InformationWeek,  12/22/2020
White Papers
Centralized Security Policy Management Across Hybrid Cloud Environments Should be an Obvious Strategy
5 Steps to Zero Trust in the Data Center
The Dark Side of SD-WAN
Five Reasons to Protect your VPN with Multi-Factor Authentication
The Essential Guide to Securing Remote Access