July 29 is fast approaching and we know you still have a lot of questions about how to download and use Windows 10. 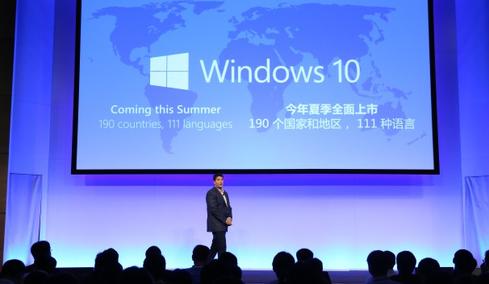 Comment  |
Email This  |
Print  |
RSS
More Insights
Webcasts
People Are The Most Important Part of Autonomous SOC
Cybersecurity's Next Wave: What You Should Know
More Webcasts
White Papers
Why Add Security to Your Skill Set and How to Do It
Accelerate Threat Resolutions with DNS
More White Papers
Reports
Improving Security by Moving Beyond VPN
The State of Cloud Computing - Fall 2020
More Reports

While we all enjoy the concept of getting stuff for $0 (free), the reality is that the creation of Windows 10 did not cost Microsoft $0 (free).  I think that may people are willing to pay for Windows 10..... it just should not cost many $$$.  I would suggest selling OS for much less than previous versions in the past.  Lets get back to the model of making one's product affordable for everyone to be able to running Windows 10.  As Microsoft has learned..... when you make your newly release version of Windows too high & already have a great Windows version currently in use by many users.... people choose to continue using older version instead of migrating to newer version.  In the longer run, it is more expense to support older versions of software.  All software companies need to find way make their customers an important value to migrate to new version of their software instead of keep using older versions.
Reply  |  Post Message  |  Messages List  |  Start a Board

I still can't believe they are releasing 7 different versions of Win10, what happened to one OS across all platforms? Why not offer stripped down installs rather than different versions for some of the more restricted platforms?
Reply  |  Post Message  |  Messages List  |  Start a Board

@tzubair: Why would any user want to do that? I mean what advantage will it bring? Savings in the registration cost?

Why would anyone want to do that?  Really?

Our corporation has 100 Win7 clients in 4 locations, plus a dozen mobile users...and a single IT person.  It is not possible to test all apps and hardware for all users and deploy Win 10 within the one year window.  But I would at least like to have the license to do this later on if desired.

How are they gonna reach a billion users, if Microsoft is gonna start charging for Win 10 $100-$199 after a year? I believe Windows 10 should remain free.
Reply  |  Post Message  |  Messages List  |  Start a Board

It's not clear to me if there is a need to register every qualified system prior to the July 29th release or is one registartion suffiicent for multiple systems. I guess if unsure one should register all of them?
Reply  |  Post Message  |  Messages List  |  Start a Board

What can we expect to be offered in Windows 10 for Mobile Devices? Are we going to see some major upgrades from Windows 8.1? Are there features specifically designed to cater to the Mobile users and the devices? I think Windows 8.1 for Mobile had a lot of improvements needed so I am looking forward to the upgrades on mobile now.
Reply  |  Post Message  |  Messages List  |  Start a Board

"I had requested a upgrade (?) to my Windows 8.1 device and received an email thanking me but no date to expect it  - Why must I hear from a 3 rd party  the install date ?   "

@Technocrati: I think people have upgraded their Windows 8.1 devices through a web link that was shared internally with Microsoft employees. I don't think it's out there for public yet.
Reply  |  Post Message  |  Messages List  |  Start a Board

"Will it be possible to register for Win10 and download it, but hold off on installing, even after the 1 year if desired? "

@gfish: Why would any user want to do that? I mean what advantage will it bring? Savings in the registration cost?
Reply  |  Post Message  |  Messages List  |  Start a Board


July 29.    This is the first I have heard of this date.   I had requested a upgrade (?) to my Windows 8.1 device and received an email thanking me but no date to expect it  - Why must I hear from a 3 rd party  the install date ?


I checked my email again before I drafted this post and still nothing -  I am trying to give Microsoft the benefit of the doubt, I wonder if they would do the same thing if I had no license for their software - well I think I know the answer to that.

CRM Trends 2021: How the Pandemic Altered Customer Behavior Forever Jessica Davis, Senior Editor, Enterprise Apps,  2/18/2021
White Papers
Why Add Security to Your Skill Set and How to Do It
Are We Cyber-Resilient? The Key Question Every Organization Must Answer
Don't Let the Past Obstruct Your Zero-Trust Future
5G-Enabled Edges of Tomorrow Require Converged Network and Security
451 Cloud Confidence Report

More Informa Tech Live Events
Detecting and Preventing Insider Data LeaksOptimizing App Performance in the Cloud Cybersecurity's Next Wave: What You Should Know