Windows 8: A Bridge Too Far For Enterprises? - InformationWeek

Windows 8 may end up marking the moment when people stopped caring about PC operating systems.

8 Key Differences Between Windows 8 And Windows RT
(click image for larger view and for slideshow)
The wait is over. Windows 8 arrives for real this week and we'll soon see whether the product Steve Ballmer admits is a bigger deal to Microsoft than the epically successful Windows 95 will live up to the company's hype and expectations. Although this isn't a "bet the company" moment--Microsoft is no longer a one-trick pony and is much less dependent on PC sales than it was in the mid-90s, as Windows now constitutes a smaller share of its revenue than applications (i.e. Office) or server software--it will chart the company's course for years to come.

Will Microsoft finally become a legitimate rival to Apple and the Google ecosystem in mobile devices or will it be forced further into the background, in the mold of IBM and Oracle, as an IT infrastructure supplier? Will Windows 8 be the catalyst that injects life into a moribund PC market that's clearly suffering from a severe case of iPad hangover, with Apple providing another dose of pain by unveiling the low-priced Mini earler in the week, or end up another Vista; the OS everyone can do without? We'll get our first hints shortly as the holiday shopping season kicks into gear. After reviewing Windows 8 for our InformationWeek Windows 8 Survival Guide, one thing seems certain: It wasn't designed with enterprises in mind.

As even the most casual technology watcher knows by now, the biggest changes in Windows 8 also happen to be the most visible: a new touchscreen and tablet-friendly UI still known as Metro (despite Microsoft's desire to banish the term to the Internet's memory hole). Although our Windows 8 poll found more people like the interface than not, as I write in the report, "A big turn off for most users is that Windows 8 sticks you with Metro as the default home screen whether you like it or not; there's no option to automatically drop back to the Windows desktop you know and its familiar Start Menu and Task Bar, although these (save the Start Menu) are still easily accessible under the covers. Fully 62% of our respondents say that inability to disable the new interface will slow or preclude their deployment." 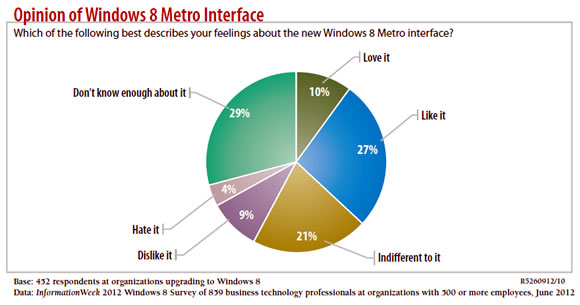 But it's not just the tile-based interface that will wreak havoc with IT departments fielding questions from befuddled users, it's the fact that Windows 8 really wants to be touched. Although the new Windows works fine on old, non-touch, hardware, indeed that's how I tested the product, at best it's a suboptimal situation and at worst can be downright exasperating. While Windows 7 did support touch, it was largely ignored both by users and vendors; but with Windows 8, Microsoft went all in. As I note in the report, the touch experience starts from the moment you want to log on, "The Metro start screen uses a swipe gesture to expose the new Charms bar (a normally hidden icon bar allowing quick access to search, sharing, system settings and application switching) to such a degree that without a touch screen device the user experience is somewhat frustrating, forcing you to hover the mouse in 'magic' screen regions." It's primarily for this reason that I advise IT decision makers, but the same holds for consumers, to limit Windows 8 to new hardware. Don't bother upgrading existing systems; the few modest benefits, better memory management, easier Wi-Fi configuration, a faster browser, aren't worth the UI hassles.

Windows 8's schizophrenia isn't just limited to the UI though. In trying to counter the iPad juggernaut, Microsoft has developed a non-x86 version, Windows RT, designed for lower-cost tablets and "laplets" (laptop-tablet hybrids). RT is a strange stepchild to the mainstream product as: (a) it won't run existing applications (since it doesn't use Intel hardware), (b) only uses the Metro UI (there's no traditional desktop to fall back on since you'll need new, Metro apps anyway), (c) is only available bundled with a device, not as a standalone product (again, what's the point since you'll need new hardware anyway) and (d) includes a version of Office (so at least you'll have something to run). While RT may be a hit with consumers (although by not undercutting iPad on price, why bother with the imitation when you can have the real thing?), it's a complete nonstarter for enterprises. Sure, you can read and edit Office docs, but in this age of webmail and other cloud applications like SaaS collaboration software, and countless Office-compatible apps, with the possible exception of Excel, who really cares anymore? RT won't run any of your custom Windows software, costs as much as the iPad or other high-end Android alternatives like the Asus Transformer Infinity and Galaxy Note, is a first generation product (unlike iPad and Android hardware that's had over two years of refinement) and still requires a keyboard to effectively use the headline app, Office. Business users looking for the all-in-one, PC-tablet experience might as well spring an extra $500 for a new touch-sensitive notebook like Lenovo's sexy Yoga 13.

Windows 8 appears to be one of those Veg-O-Matic-type products with Microsoft trying to do too much at once: please both mobile device and PC users, those migrating from the PC world and those looking for a new tablet experience, buyers looking for a low-cost PC companion and those running high-end ultrabooks. And like most hybrid compromises, it ends up doing an adequate, but far from stellar, job at any given task. Instead of being Microsoft's answer to the iPad, Windows 8 may end up marking the moment when people stopped caring about PC operating systems.

We welcome your comments on this topic on our social media channels, or [contact us directly] with questions about the site.
Comment  |
Email This  |
Print  |
RSS
More Insights
Webcasts
Making XDR Work in Your Enterprise - May 12
Multi-Cloud Data Management for Modern Applications
More Webcasts
White Papers
Enabling Enterprise Resiliency Through Cyberthreat Detection
Improve your business with a Virtual CISO
More White Papers
Reports
Are We Cyber-Resilient? The Key Question Every Organization Must Answer
Cloud Misconfiguration Mayhem
More Reports