50%
Tweet
Latest Threshold leak seems to confirm Microsoft is returning its operating system to a Windows 7 vibe, with second-fiddle status for Modern apps.

Screenshots of the next version of Windows, codenamed "Threshold," have allegedly leaked online and appear to confirm many recent reports. Notably, the images indicate that after making the desktop user interface too touch-oriented in Windows 8, Microsoft will move to a more Windows 7-like model with Threshold, but with a new look and a reconsidered role for Modern apps. In some ways, however, the screenshots are most intriguing for what they don't include.

German sites WinFuture and ComputerBase each published an identical set of 20 screenshots, allegedly from Threshold build 9834. Microsoft reps have said the company has nothing to share, but ZDNet and Neowin, both of which have good track records for Microsoft product leaks, said the images appear legitimate. ZDNet's Mary Jo Foley suggested the screenshots were grabbed from a build Microsoft recently released to partners.

The screenshots feature the new Start menu that Microsoft first teased in April; users criticized Microsoft for omitting the Start menu from Windows 8. The new version appears to include elements that should be familiar to Windows 7 users, as well the new ability to integrate Modern apps, and to access the device's power controls. Past rumors suggest the Start menu's look could be highly customizable.

[We bet you didn't think of these wearable gadgets. Read 5 Apple Wearables We Wanted But Didn't Get.]

The leaked images also show Modern apps running in floating windows, as legacy apps do. Microsoft confirmed last spring that this feature is coming, but the images add a few new wrinkles. In the top-left of the windows, Threshold Modern apps include a drop-down menu that lists functions such as sharing and printing, which Windows 8 and 8.1 currently put in the Charms menu.

This change is consistent with previous reports that Microsoft will altogether eliminate Charms, which many Windows 8 users found disorienting because the feature remains hidden until users trigger it via swipes or hot corners. Nevertheless, Foley said the Charms menu might be present in the Windows preview that Microsoft is expected to announce in coming weeks. She said most app vendors haven't had a chance to update their apps for Threshold, making Charms necessary in the short term. The Charms menu is reportedly slated for removal by the time Threshold hits the market early next year. 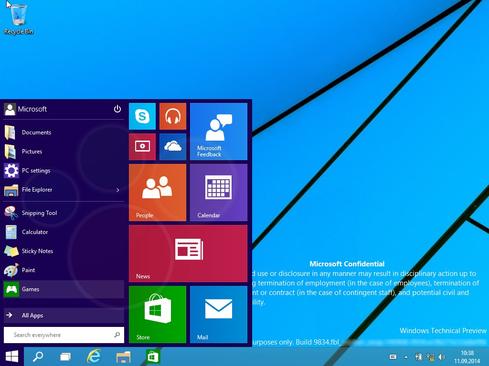 Various reports claim Threshold will load a different UI depending on the type of device on which it's running, so the Charms might still be present for tablet users. The new dropdown menu in the screenshots is clearly designed with mouse-and-keyboard users in mind and does not appear to be touch friendly.

The screenshots also support earlier rumors that Microsoft will adopt a flatter design for the desktop UI. Other images show additional rumored features, including a Notification Center, and support for virtual desktops. In the alleged leaked build, the implementation of the latter feature looks a lot like it does in Apple's OS X, except that virtual desktops stream across the bottom of the screen, just above the taskbar, as users move among them.

According to other recent rumors, Microsoft's Threshold preview will include a feature that lets users easily submit feedback. The screenshots support this claim but don't reveal whether Microsoft's feedback strategy will fulfill the most intriguing rumors, which say users will be given different versions of the Threshold preview, with different features, depending on the kind of feedback they provide. CEO Satya Nadella has said he wants Microsoft to iterate rapidly, improving Windows with a perpetual stream of updates, instead of big service packs that arrive every few years. This sort of public testing process could help. 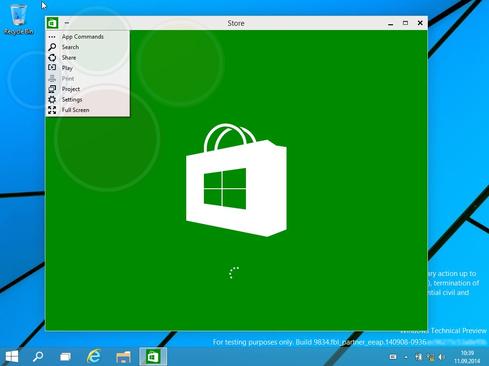 The screenshots' omissions are just as intriguing. The images suggest build 9834 is still using Internet Explorer 11, for instance, even though IE 12 rumors have begun to pick up steam. The screenshots also lack references to either "Threshold" or "Windows 9." Instead, all references merely say "Windows." Some reports have suggested Microsoft will opt for "Windows 9" in order to distance the OS from its predecessor's poor reputation. But other indications, including some from Nadella himself, suggest Microsoft will not only drop version numbers, but also stop differentiating between Windows Phone and Windows.

This rumored branding change would be consistent with Microsoft's recent moves, such as converging all versions of Windows to a common core, and announcing support for Modern apps that can run on anything from desktops to smartphones to the Xbox. Nadella has repeatedly said Microsoft services should flow seamlessly across devices, and by making Windows an all-encompassing ecosystem, rather than a series of discrete products, the company could amplify this message. The new branding is also consistent with reports that ARM-based Windows smartphones and tablets will soon use the same UI. This expectation gained new momentum this week when the website GeekOnGadgets reported, citing a confidential internal document, that Microsoft plans to drop both "Nokia" and "Windows Phone," and make "Lumia" its "hero brand" for smartphones.

Several sources claim Microsoft will release a public preview of Threshold by early October. According to Foley, who cited unnamed sources familiar with Microsoft's plans, the company will label the release a "Public Enterprise Tech Preview" and focus it on desktop users. She said a second, more consumer-focused preview that focuses on smartphones and tablets will follow early next year. The OS's official release is expected shortly thereafter.

Michael Endler joined InformationWeek as an associate editor in 2012. He previously worked in talent representation in the entertainment industry, as a freelance copywriter and photojournalist, and as a teacher. Michael earned a BA in English from Stanford University in 2005 ... View Full Bio
We welcome your comments on this topic on our social media channels, or [contact us directly] with questions about the site.
Comment  |
Email This  |
Print  |
RSS
More Insights
Webcasts
Building and Refining Threat Hunting Practices in Your Enterprise
Now That Ransomware Has Gone Nuclear, How Can You Avoid Becoming the Next Victim?
More Webcasts
White Papers
DevOps for the Database
Wired vs. Wireless LAN Solution
More White Papers
Reports
Online Threats -- and What Your Org Can Do About Them
[Special Report] Remote Network Management
More Reports

We'll see what they've got cooking in the smartphone/tablet Windows preview that's supposed to hit around January. Microsoft is going a good job moving its software and services to a mobile world, I think, but the OSes are a work in progress.
Reply  |  Post Message  |  Messages List  |  Start a Board

Well, I guess you can go home again. Though I'm not sure how returning to a more traditional desktop design (though it's a welcome change after the Windows 8 confusion) will help keep Microsoft relevant as the word becomes more mobile every minute.
Reply  |  Post Message  |  Messages List  |  Start a Board
Editors' Choice
Hot Topics

IT Career Paths You May Not Have Considered Lisa Morgan, Freelance Writer,  6/30/2020
White Papers
DevOps for the Database
Wired vs. Wireless LAN Solution
2020 State of Malware Report
Have Peace of Mind With Your Database Deployments
Step Into the New Era of Digital Decisioning Platforms