Microsoft no longer supports Windows XP, but 25% of PC users still use it today -- twice as many as use Windows 8 and 8.1.

You've got to hand it to people who still use Windows XP -- they're a resolute bunch. Microsoft stopped supporting the enormously popular OS almost three months ago, but according to the newest figures from Web tracking firm Net Applications, more than a quarter of PC users still relied on XP in June.

XP remains resilient despite Microsoft's multi-year upgrade campaign, which included frequent reminders that the OS would become vulnerable to malware, and even a zero-day scare shortly after Microsoft ceased support. The latter pressured the company to issue a security fix in a "one-time exception" to its support policy.

Net Applications, which scans a network of 40,000 websites and 160 million unique users each month, found that Windows 7 remained the top OS overall, with 50.55% of PC users. That was up meaningfully from 50.06% in May and 49.27% in April. Retailers and OEMs have deemphasized Windows 7 in their consumer offerings, but Net Application's new numbers reinforce that among businesses that recently upgraded from XP, most chose Windows 7. 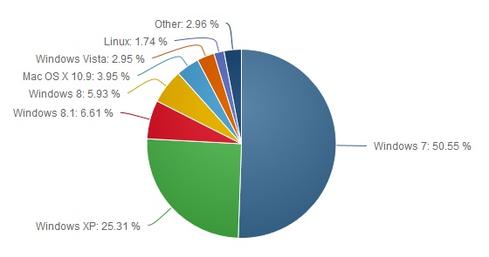 Windows XP remained the second most popular OS by a large margin. It snared 25.31% of users in June -- basically flat compared to May. XP commanded 37.17% of the market in June 2013 and more than 29% in January, which means that millions of XP users have indeed upgraded to newer platforms.

But millions still remain, and XP's rate of attrition is slowing. Some businesses are paying Microsoft for extended XP support, and many third-party security vendors offer XP-oriented products and services as well. Consequently, not all of the XP traffic, which is drawn from users who connect to the public Internet, necessarily represents the same security risk.

Windows 8 and 8.1's flat-lining growth speaks to why Microsoft's older OSes remain so popular: Existing Windows customers simply haven't felt compelled to upgrade. In June, Windows 8.1 accounted for 6.61% of the market, up a bit from 6.35% in May. The original version of Windows 8 held 5.93%, down from 6.29% the month before.

With almost 53% of the combined Win 8/8.1 user base, Windows 8.1 achieved its greatest share to date. That said, it remains somewhat puzzling that more Win 8 users haven't moved to 8.1, given that the update is free and earned better reviews than its maligned predecessor. Moreover, Win 8/8.1 combined for only 12.54% of users, which was not only less than half Windows XP's share, but also down from May's 12.64%.

Apple's top performer was Mac OS X 10.9 (Mavericks), which is the current version. It grabbed 3.95% of users. That accounted for almost three-fifths of the overall Mac user base. Fewer than 14% of Windows customers, in contrast, have moved to Windows 8 or 8.1. Apple CEO Tim Cook made a similar comparison last month, arguing that Mac customers find OS X more appealing than Windows customers find Windows 8 or 8.1. That might be true, but Net Application's numbers still point to concerns for Apple.

Macs accounted for only 6.73% of PC users overall -- Apple's worst share so far this year. There's a certain amount of noise implicit in Net Applications' sampling methodology, but Apple's computers appear to have lost steam in recent months. OS X's June share was down precipitously from 7.39% in May, and 7.62% in April. The company recently introduced low-cost iMac and MacBook Air models, but Apple this year has otherwise left its consumer PC lineup relatively unchanged. Some would-be customers might have grown impatient and moved on, and some might be waiting for product refreshes.

Windows accounted for 91.53% of the market in June, up from 90.99% in May. Still, Microsoft is surely concerned by Windows 8 and 8.1's stalled growth. Newer, flashier devices could help, including the Surface Pro 3 as well as the fleet of svelte, powerful Ultrabooks recently introduced at the Computex trade show. But Microsoft is moving toward a cloud-focused future, while most of its Windows customers stick with OSes rooted in the past. Based on the most recent rumors, the company will attempt to reenergize the user base with Windows 9. It will allegedly run differently on different types of devices, and will include a desktop-oriented version in which the tiled Start screen is disabled by default.

Michael Endler joined InformationWeek as an associate editor in 2012. He previously worked in talent representation in the entertainment industry, as a freelance copywriter and photojournalist, and as a teacher. Michael earned a BA in English from Stanford University in 2005 ... View Full Bio
We welcome your comments on this topic on our social media channels, or [contact us directly] with questions about the site.
Comment  |
Email This  |
Print  |
RSS
More Insights
Webcasts
People Are The Most Important Part of Autonomous SOC
Optimizing App Performance in the Cloud
More Webcasts
White Papers
Why Add Security to Your Skill Set and How to Do It
MontanaPBS Shifts to Agile Broadcasting with Help from Raritan KVM Solutions
More White Papers
Reports
Protection Strategies for a Cyber-Resilient Organization
Building the SOC of the Future
More Reports

I think people just look at an OS upgrade as something between an unpleasant chore (for more technical types) and a terrifying ordeal that could end up with their PC being a doorstop. It just makes sense to upgrade an OS at the same time you buy new hardware, and those systems are presumably working just fine.

"You've got to hand it to people who still use Windows XP -- they're a resolute bunch"
It's not that we are all that resolute, sometimes we don't have many choices; or people don't know any better, even with the annoying end of support box popping up every so often.

I'm guilty of installing (recently, I might add) XP on old computers'laptops. I tried with Linux, but old computers don't get along very well with new Linux distros, or people just don't like it.
Reply  |  Post Message  |  Messages List  |  Start a Board

Very true. While some people are on XP out of negligence or obliviousness, many are on it for other reasons, ranging from financial considerations, to XP actually being well-suited (Microsoft support or not) for their needs. Still, it's mind-boggling how many users it still has!
Reply  |  Post Message  |  Messages List  |  Start a Board

Why dump a perfectly functional piece of hardware? We have several XP-era PCs that work just fine. Now, we did move to Win 7, but even if we hadn't I suspect they'd be chugging along.
Reply  |  Post Message  |  Messages List  |  Start a Board

How many of XP users are actually actively using it? Aren't many corporate machines that have XP out of inertia?
Reply  |  Post Message  |  Messages List  |  Start a Board

Agree, that the stats are pretty startling -- may say more about Microsoft and a large company's ability to be a trend setter.


Would like the stats to tell me what percentage of people use it in a business setting and personal setting. And how embedded it is into how a company runs.

I have a few friends who have not upgraded from XP. All they do is send email and use AOL. And for that, XP works fine.
Reply  |  Post Message  |  Messages List  |  Start a Board

XP is in use by a lot of point of sale systems and proprietary hardware systems that are kept on private networks, so they don't require internet update support.  XP is still very popular in India, which has a lot of people in it who often pirate that OS.  XP continued to be used in Virtual Machine session hosts that again, do not interact much with the internet, nor have any need for new hardware drivers.  I know of many companies that block internet access for employees and run private email servers, so their employee workstations manage just fine on XP, as do most public libraries continue to run XP and as their card member workstations are read only, and set to wipe any storage and block program installs, they manage fine on XP and have no budget to upgrade.
Reply  |  Post Message  |  Messages List  |  Start a Board

So is it time to treat an OS like a car? I can still get my 56 Chevy fixed in an aftermarket mode, but not by the manufacturer. Who is dropping the ball here? MSFT or anoher company which can come along and support XP with MSFT's help?
Reply  |  Post Message  |  Messages List  |  Start a Board

This is  a good but tricky question. In my opinion old car is not fullly comparable to Windows XP. For old car, you need regular maintenance and repair if you want to  keep it functioning. For Windows XP, you can let it run almost forever,  assume that you don't  care about the security holes. I am not sure if MS will support any 3rd party vendor to provide certain kind of limited support to XP. But I suppose the answer is most  likely "No".
Reply  |  Post Message  |  Messages List  |  Start a Board

That's a pretty interesting idea. The market is certainly open for someone to step in, but whether Microsoft would allow the kind of low level access likely needed to maintain the operating system is another thing altogether.
Reply  |  Post Message  |  Messages List  |  Start a Board
Page 1 / 2   >   >>
Editors' Choice
Hot Topics