AdNauseam, an extension for the Firefox version of AdBlock Plus, clicks on blocked ads to throw bad data in path of online tracking.

A trio of technologists has developed an add-on for the Firefox browser extension AdBlock Plus called AdNauseam that aims to turn ad blocking into an expression of protest against online tracking.

AdNauseam does this by clicking on online ads blocked by AdBlock, rather than ignoring them. If the software becomes widely adopted and its automated clicks are not caught by click fraud systems used by online ad networks, publishers starved of ad revenue by ad blocking could fare better while advertisers could find themselves billed for ads that were never presented.

The creators of the software, NYU professor Helen Nissenbaum, technologist Daniel C. Howe, and designer Mushon Zer-Aviv, say AdNauseam adds junk data to online advertising systems to protect people from the surveillance and online tracking conducted by these networks. They describe it as a response to the ad industry's failure to reach a consensus on the Do Not Track system, a response that allows individuals to fight back against unwanted surveillance on their own.

Do Not Track, envisioned as a way to shield Internet users from Internet tracking, has been watered down by the online ad industry. It presently carries all the force of asking nicely: It's a preference users must choose to set and advertisers can choose to ignore; it imposes no legal obligations or technical limitations on advertisers.

"We do not oppose online advertising," said Howe in an email. "We are bringing to light a system of advertising that has taken hold of the Net, whereby ads are just the tip of the iceberg and serve as a delivery system for a massive backend surveillance architecture that tracks each one of us. To reiterate, it is not advertising we are protesting, but advertising insofar as it represents a dominant means of tracking."

Sean Blanchfield, CEO of PageFair, a firm that helps publishers deal with ad blocking, said in an email that AdNauseam shows there's growing concern for online privacy but seems misguided.

"Advertisers primarily perform user profiling with tracking pixels and third-party cookies, not by monitoring clicks," he said. "Since AdNauseum works by blindly clicking ads on the websites its users visit, advertisers will not be able to distinguish it from deliberate click fraud. This means that if it gains popularity with technical users, its only achievement will be to destroy the businesses that run its users' favorite websites." 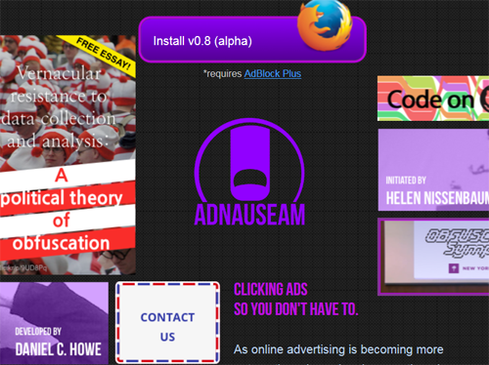 Howe disputes that AdNauseam commits click fraud. "We understand what click fraud is and do not believe we are engaging in it (nor do the lawyers we have consulted)," he said. "Turning the tables, we would like to hear why someone holds that AdNauseam does commit click fraud. Would you say the same of anyone who clicks on an ad in which he or she is not really interested?"

Ari Jacoby, CEO of Solve Media, a firm that provides technology to protect websites against bot traffic, said in an email, "The creators of this browser extension seem to be making a political statement about their dislike for advertising, in general, by enabling those with malicious intent to defraud the ad ecosystem. This click fraud would be detected by many systems, but would surely be missed by some."

Jacoby observed that although bot traffic attacks on advertisers has been rising, it's generally for profit. AdNauseam, he said, "is designed to defraud for sport and is a sick display of the blatant disregard that some have for the symbiotic relationship between advertising and editorial that supports a free Internet."

The health of that relationship remains open to debate. Although large online ad companies such as Facebook strive to make advertising and editorial indistinguishable by pushing native advertising, Internet users are increasingly looking for ways to avoid ads. Users of ad blocking increased 69% between the second quarter of 2013 and the second quarter of 2014, according to PageFair, and now represent about 144 million people, or almost 5% of Internet users. (And this figure is probably artificially depressed because smartphone owners might not be able to, or know how to, install ad-blocking software: Apple doesn't allow ad blocking software in its iOS App Store and Google booted AdBlock Plus from Google Play.)

Over the summer,  Ethan Zuckerman, director of MIT's Center for Civic Media and the inventor of the popup ad, argued that the Internet's problems today are a consequence of reliance on advertising as the primary business mode. That sentiment appears widespread enough to help Ello, a social network that promises to avoid ads, raise over $5 million in funding.

Thomas Claburn has been writing about business and technology since 1996, for publications such as New Architect, PC Computing, InformationWeek, Salon, Wired, and Ziff Davis Smart Business. Before that, he worked in film and television, having earned a not particularly useful ... View Full Bio
We welcome your comments on this topic on our social media channels, or [contact us directly] with questions about the site.
Comment  |
Email This  |
Print  |
RSS
More Insights
Webcasts
Fintech at SaaS speed: Navigating the scale & security challenge
4 Practical Tips for Building a Data Lake
More Webcasts
White Papers
4 Key Elements of an ML-Powered NGFW: How Machine Learning is Disrupting Security
How DevOps Delivers on User Experience with Observability
More White Papers
Reports
2021 Email Threat Report
Cortex XDR Rides the Forrester Wave as a Leader
More Reports