In its latest update to Gmail, Google is offering additional support for Yahoo and Microsoft accounts by giving users a unified view of their different email addresses.

Google rolled out a new application for mobile devices running its Android operating system software that gives users a unified inbox for a number of different email accounts, including Yahoo, Microsoft, and Gmail accounts.

By using the new All Inboxes option, users can now read and respond to all their email messages without having to jump between different accounts.

One of Gmail's most popular features, threaded conversations, has been extended to Yahoo, Outlook.com, and other IMAP/POP accounts, and will appear stacked as one conversation.

Google has also improved auto-complete for the Android app, making it easier to search the inbox more quickly.

The update includes larger attachment previews, more responsive animations (such as those for opening and closing a conversation), and the ability to save to Drive with one click.

"These days, many of us have more than one email address. If you're a student, you may have one account for school, one for a campus group you lead, and one for your blog," Régis Décamps, a Google software engineer, who detailed the March 30 announcement on the company’s Official Gmail Blog. "If you're a parent, you might have one for family and one for your business. However many email addresses you have, today's improvements to the Gmail app for Android make it easy to manage all your mail from all your accounts while you're on the go." 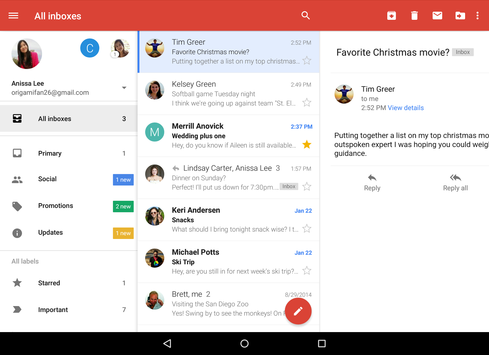 While the app is available immediately for Android users, the company failed to mention whether the app would find its way onto arch-rival Apple's iPhone at any time.

One feature Google did bring to iPhones earlier this month was the new Google Calendar, which brings Android features like Events from Gmail. This function turns emails into Calendar events automatically. Another, Schedule View, makes the calendar easier to scan.

Google is not the only one looking to expand the reach of its apps to other users. On March 23, Microsoft announced that it would bring many of its productivity apps, such as Word and Excel, to a variety of different Android smartphones made by Samsung and Dell. The idea here is not to compete head-to-head, but to persuade users of other platforms to use different tools by making them easily accessible and tailored to their needs.

Another feature included in the latest Google Gmail update is Assists. This feature makes suggestions designed to save users time in creating events.

As mobile devices become more pervasive, they are changing the way consumers use their smartphones and conduct messaging, a 2013 study by Acxiom indicated.

While making calls is still the top smartphone activity, checking personal email was the fourth most common activity, engaged in by more than 90% of survey respondents.

Users are not as likely to send or receive business emails, however. Fewer than half (42%) of respondents said they use their smartphone for this purpose.

The survey also found 38% of users with business emails had two email addresses, and 5% had three or more, indicating Google's move to make mobile email simpler and more holistic would push things in the right direction.

A study released earlier in March by physical security provider Kensington found mobile devices are extending the work day, with 40% of respondents admitting they check their email within 15 minutes of waking up, and an additional 21% checking email while in bed at the end of the day.

Nathan Eddy is a freelance writer for InformationWeek. He has written for Popular Mechanics, Sales & Marketing Management Magazine, FierceMarkets, and CRN, among others. In 2012 he made his first documentary film, The Absent Column. He currently lives in Berlin. View Full Bio
We welcome your comments on this topic on our social media channels, or [contact us directly] with questions about the site.
Comment  |
Email This  |
Print  |
RSS
More Insights
Webcasts
Getting SASE: What Every Enterprise Should Know
End to End Automation: A Game Changer for Improving Workforce Efficiency
More Webcasts
White Papers
2021 Data Breach Investigations Report (DBIR)
How to Plan for Endpoint Security Against Ever-evolving Cyberthreats
More White Papers
Reports
[Tech Insights] SASE's Pandemic Boost Likely to Stick
The State of Cybersecurity Incident Response
More Reports
Copyright © 2021 UBM Electronics, A UBM company, All rights reserved. Privacy Policy | Terms of Service