Google Docs has learned a new trick: Voice typing, the ability to recognize words and commands spoken through a desktop computer's microphone.

As of Wednesday, those who use Google Docs via Chrome on desktop computers can edit and format documents by voice. A lesser version of this capability, Voice Transcription, available since last September, lacked editing or formatting functions. 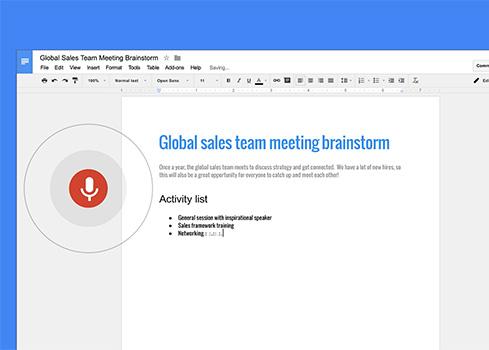 Activating Voice typing is a matter of selecting "Voice typing" from the Tools menu in Google Docs. After that, a popup microphone window should appear. To tell Google to listen, click the microphone popup or press Ctrl + Shift + S (Cmd + Shift + S on a Mac) on the keyboard. You can then speak to enter text into a Docs file or to edit or format that text.

"As an added bonus, we're also making it possible to dictate in Docs on the Web in dozens of additional dialects and accents, including English with an Indian accent, Spanish with a Mexican accent, and more so you can talk in the most natural way for you," said product manager Isaiah Greene in a blog post.

Google's voice recognition technology deserves mention here. Last year, the company celebrated the impact deep learning has had on the voice transcription technology in Google Voice. By soliciting users of the service to share their voicemail audio files, Google researchers were able to use that data to reduce transcription errors by 49%. The same technology also supports Docs.

At Google I/O 2015, Sundar Pichai, prior to his elevation to CEO, said that advancements in deep learning had reduced Google's speech recognition error rate from 24% in 2013 to 8% in 2015. Improvements of this sort explain why Pichai has continued touting neural networks, deep learning, and artificial intelligence as engines of future growth for Google.

Thomas Claburn has been writing about business and technology since 1996, for publications such as New Architect, PC Computing, InformationWeek, Salon, Wired, and Ziff Davis Smart Business. Before that, he worked in film and television, having earned a not particularly useful ... View Full Bio
We welcome your comments on this topic on our social media channels, or [contact us directly] with questions about the site.
Comment  |
Email This  |
Print  |
RSS
More Insights
Webcasts
How the Rapid Shift to Remote Work Impacted IT Complexity and Post-Pandemic Security Priorities
Using MS Teams as Your Phone System - FREE Event 4/14
More Webcasts
White Papers
2020 SANS Enterprise Cloud Incident Response Survey
The Top 5 Mistakes Everyone is Making in Vulnerability Remediation
More White Papers
Reports
Dark Reading Report: Battle for the Endpoint
Immuta Data Engineering Survey: 2021 Impact Report
More Reports

I think voice dictation technology will evolve out of necessity we can't continue to type on tiny keyboards with any speed for eternity. I personally think it has gotten much better on my phone and tablet and use it more often. No it is not perfect but it does help and for me is faster than one finger or thumb typing.
Reply  |  Post Message  |  Messages List  |  Start a Board
Editors' Choice
Hot Topics