Google is adding a Q&A feature to its Slides offering. The feature aims to foster more active audience participation and broaden the application's mobile capabilities.

By using a smartphone or tablet, along with the Slides app, users can present to any screen via Chromecast, AirPlay, or Hangouts. 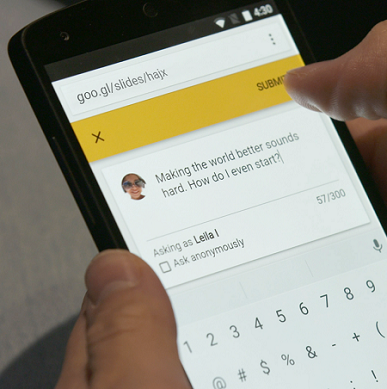 The updates, which are rolling out globally for Android, iOS, and Web, also include a new laser pointer on the Web, aimed at users who like presenting from a computer.

"Public speaking can be intimidating -- even for veteran speakers with phenomenal ideas and experiences to share," Michael Frederick, Google Slides engineer, wrote in a May 4 blog post. "So go on, share your stories and present with confidence."

The Google Docs, Sheets, and Slides suite allows users to create and edit documents online while collaborating with other users in real-time. The suite's components are available as Web applications, as Chrome apps that work offline, and as mobile apps for Android and iOS.

The suite is also tightly integrated with Google Drive, since all files created with the apps are by default saved to Google Drive.

[Discover the ways Google and HP are trying to change enterprise computing.]

The update of Slides follows Google's September 2015 announcement of changes to Google Apps that aimed to enhance collaboration and content creation.

At that time, Google rolled out a Sheets feature called Explore that will automatically analyze spreadsheet data and generate charts from it. Users simply select data in a spreadsheet and then select Explore. Google will then interpret and present the data.

Customers with a volume licensing account can download OOS from the Volume License Servicing Center at no cost. They will have view-only functionality, which includes PowerPoint sharing in Skype for Business.

For customers that require document creation, edit, and save functionality in OOS, they will need to have an on-premises Office suite license with Software Assurance or an Office 365 ProPlus subscription.

Nathan Eddy is a freelance writer for InformationWeek. He has written for Popular Mechanics, Sales & Marketing Management Magazine, FierceMarkets, and CRN, among others. In 2012 he made his first documentary film, The Absent Column. He currently lives in Berlin. View Full Bio
We welcome your comments on this topic on our social media channels, or [contact us directly] with questions about the site.
Comment  |
Email This  |
Print  |
RSS
More Insights
Webcasts
People Are The Most Important Part of Autonomous SOC
Don't Miss This Cybersecurity Virtual Event
More Webcasts
White Papers
Anatomy of a Modern Phishing Attack
Accelerate Threat Resolutions with DNS
More White Papers
Reports
The Malware Threat Landscape
Building an Effective Cybersecurity Incident Response Team
More Reports