Sept. 22 marks the worldwide release of Office 2016 for Windows, with a new delivery model and apps designed to pair with Windows 10.

The latest version of Office has been redesigned for Windows 10 optimization, improved collaboration and tighter security. All apps within the Office suite have been updated, including Word, Excel, PowerPoint, Outlook, OneNote, Access, Project and Visio.

"The way people work has changed dramatically, and that's why Microsoft is focused on reinventing productivity and business processes for the mobile-first, cloud-first world," said CEO Satya Nadella in a Sept. 22 statement.

Microsoft Office has traditionally been the go-to tool for productivity but lacked the necessary tools to help people work together. The desktop apps and online services have since been updated to make collaboration more of a core priority.

The real-time co-authoring feature, which has been a component of Office Web apps since 2013, has been included in native Office apps. Now if a group of employees is working on a Word document, for example, they can view one another's comments as they are written.

Skype for Business is now available across the Office client apps so you can chat, screen share or video chat directly from your document, or start a co-authoring session from any conversation. Skype is coming to Office Online later this fall.

Tell Me and Smart Lookup are two more capabilities that have made their way from Office Online to desktop apps. If you're looking for a specific Office feature or command, Tell Me will interpret your request to help you find the tool you need. Smart Lookup delivers information from the Web right into your documents.

Some new features are specific to certain Office apps. Excel 2016, for example, now has modern chart types to make the most of your data and integrated publishing to Power BI.

Outlook 2016, another example, automatically removes low-priority mail and ensures that recipients have the correct access to OneDrive cloud attachments. Office 365 Groups are now integrated into the Outlook client app and available on mobile devices via the Outlook Groups app for iOS, Android and Windows Phone. 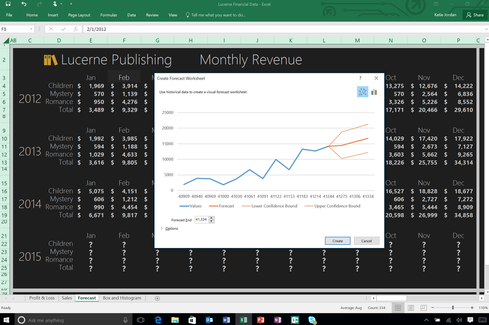 Updates to Office 365 include Office 365 Planner, a tool teams can use to record new plans, organize and delegate plans, and update one another on their progress through visual dashboards and email updates. Planner will be available in preview starting next quarter, Microsoft reports.

Some more new tools we can expect include Office 365 Groups insights and discovery in Office Delve, personal work analytics in Delve, additional charts and formulas for Excel, expanded presentation capabilities in PowerPoint, and the availability of Office insights from Cortana.

Office 365 subscribers can download the new apps through their Microsoft accounts. Not a subscriber? You can sign up for Office 365 and access the upgraded Office tools in addition to future updates as they are released from Microsoft. As part of their subscription, which starts at $7 per month for a Personal account ($10 for Home), Office 365 customers will receive new features and capabilities in Office desktop apps.

Alternatively, you can pay a one-time fee for the retail version of Office 2016, which is compatible with Windows 7 or later. The price starts at $230 for Office Home & Business 2016 and goes up to $400 for Office Pro.

The standalone purchase option has also been made available for Office 2016 for Mac, which was released in July 2015. Microsoft is delivering on the promise it made this summer and making the newest version of Office for Mac available as a one-time purchase of $230.

[This article was updated on 9/22 to include pricing details.]

Kelly Sheridan is the Staff Editor at Dark Reading, where she focuses on cybersecurity news and analysis. She is a business technology journalist who previously reported for InformationWeek, where she covered Microsoft, and Insurance & Technology, where she covered financial ... View Full Bio
We welcome your comments on this topic on our social media channels, or [contact us directly] with questions about the site.
Comment  |
Email This  |
Print  |
RSS
More Insights
Webcasts
Making XDR Work in Your Enterprise - May 12
How the Rapid Shift to Remote Work Impacted IT Complexity and Post-Pandemic Security Priorities
More Webcasts
White Papers
Enabling Enterprise Resiliency Through Cyberthreat Detection
The InformationWeek 2021 State of ITOps and SecOps Report
More White Papers
Reports
The State of CCPA 2021
Key Strategies for Managing New Risks in Cybersecurity
More Reports

$230 for the standalone version of Office for Mac 2016? That seems a bit steep.
Reply  |  Post Message  |  Messages List  |  Start a Board
InformationWeek Is Getting an Upgrade!