Microsoft's Planner app lets users design customizable templates and attach files to tasks, among other things. The software giant is offering Planner with its Office 365 suite.

Microsoft is looking to help project managers with the release of Planner, an addition to the Office 365 suite that lets users create new plans, organize and assign tasks, share files, chat about what they're working on, and get updates on progress.

The company introduced Planner in a June 6 blog post.

Built for Office 365, Planner lets users attach files to tasks, work together on those files, and also have conversations around tasks without switching between apps.

With Planner, all the team's discussions and deliverables stay with the plan and don't get locked away across disparate applications. 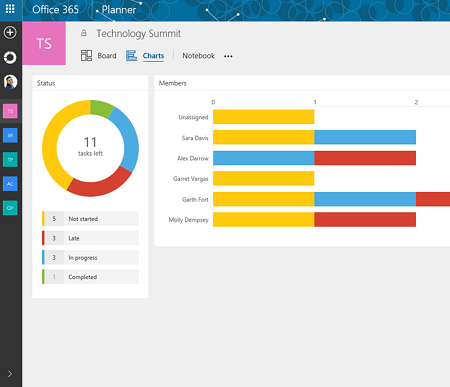 In addition, each plan has its own board where users can organize tasks into buckets and categorize tasks based on their status or on whom they're assigned to.

Over the next several weeks, Planner will roll out to all eligible Office 365 customers worldwide. This includes Office 365 Enterprise E1–E5, Business Essentials, Premium, and Education subscription plans.

All users with eligible subscription plans will automatically see the Planner tile appear in the Office 365 app launcher when it is available for them to use. No specific action by Office 365 administrators is needed.

Some of the new features Microsoft plans to introduce over the next few months include the ability to assign a task to multiple users, external user access, plan templates, customizable boards and apps for iOS, Android, and Windows.

The app will be in competition alongside platforms such as Trello, Slack, Basecamp, and Asana, as well as Google, which has worked to improve workflows that exist between Google Apps and other applications, which often involve copying and pasting data between apps.

In addition, Google says Conga, ProsperWorks, SalesforceIQ, and Trello are among the companies working to integrate the Slides API into their products.

[Read about Microsoft gaining in the SaaS market.]