Microsoft Positions 'Holoportation' As The Future Of UC - InformationWeek

"Help me Microsoft, you're my only hope!" The software giant pulls unified communications into the future with the help of what the company calls holoportation. It's the next step for Microsoft's HoloLens technology.

Microsoft is looking to move unified communications (UC) technology into science fiction territory with the development of what it calls holoportation.

Holoportation is a new type of 3D-capture technology that allows high-quality models of people to be reconstructed, compressed, and transmitted anywhere in the world in real-time.

When combined with mixed reality displays such as HoloLens, this technology allows users to see and interact with remote participants as if they are actually present in the same physical space.

The aim is to make communicating and interacting with remote users as natural for you as face-to-face communication, whether you are going over quarterly reports or asking for assistance from your only hope. 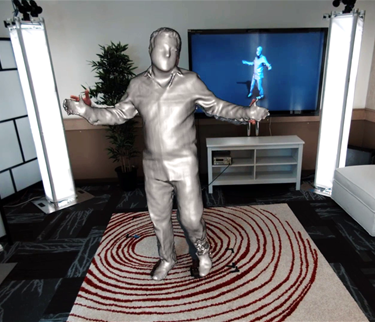 Microsoft posted a nearly five-minute YouTube video with holoportation research manager Shahram Izadi showing how the technology will work in the real world. It includes a demonstration with a coworker who appears out of thin air.

The project necessitated the development of new motion capture cameras that provide a high-quality 3D rendering of the participants, which are seen through the Microsoft HoloLens headset.

HoloLens is an augmented reality headset designed by Microsoft and unveiled during the Windows 10 debut event in January 2015. The gear enables its wearer to see and interact with holograms overlaid on physical objects.

Microsoft opened pre-order sales for its HoloLens Development Edition in February in a move to expand the ecosystem for its augmented reality device, and avoid a repeat of the Kinect conundrum.

Microsoft is selling the HoloLens Development Edition for $3,000, with shipments beginning on March 30 in the US, Microsoft announced Monday, March 28.

With this edition, developers will also receive access to documentation, a developer community, and additional developer tools like Visual Studio projects. Once the developer edition starts shipping, Microsoft will release its HoloLens emulator so that developers can test holographic apps on PCs without needing an actual HoloLens.

Beyond the boardroom, Microsoft is testing the applications of augmented reality in zero gravity, teaming up with NASA to bring the HoloLens to the International Space Station (ISS).

The use of HoloLens aboard the ISS is part of a partnership between Microsoft and NASA that was announced earlier this year. The two initially teamed up in January to develop software called OnSight, with the goal of enabling scientists to virtually work on Mars with HoloLens.

Microsoft is far from the only company bolstering its augmented reality credentials.

Google is currently working to bring Google Glass 2 to enterprise and high-tech markets. While Google Cardboard currently provides users with a low-cost virtual reality headset, the search giant is reportedly planning a new type of VR device that won't rely on a smartphone, PC, or game console.

Apple is also bolstering its roster of virtual reality and augmented reality portfolios with the hiring of specialist Doug Bowman, a former interactive computing researcher at the Center for Human-Computer Interaction at Virginia Tech, according to a Financial Times report from January.

Nathan Eddy is a freelance writer for InformationWeek. He has written for Popular Mechanics, Sales & Marketing Management Magazine, FierceMarkets, and CRN, among others. In 2012 he made his first documentary film, The Absent Column. He currently lives in Berlin. View Full Bio
We welcome your comments on this topic on our social media channels, or [contact us directly] with questions about the site.
Comment  |
Email This  |
Print  |
RSS
More Insights
Webcasts
Key technology trends in 2021 - Making these technologies work for your business
Nip Ransomware in the FUD: Detecting Attacks Pre-Encryption
More Webcasts
White Papers
Why Add Security to Your Skill Set and How to Do It
Sunburst: Impact and Timeline
More White Papers
Reports
The Malware Threat Landscape
DNS Network Traffic Volumes During the 2020 Pandemic
More Reports