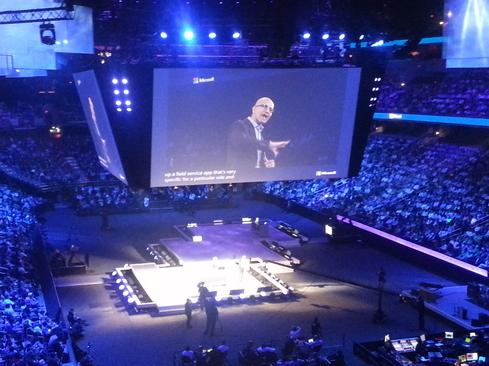 Nothing risky here from Nadella. I wonder if partners were looking for something bolder given today's Apple-IBM news.
Reply  |  Post Message  |  Messages List  |  Start a Board

Microsoft has great productivity software and cloud platform in Azure. And it appears it'll keep pushing aggressively in that direction to its "soul." But I don't know how Microsoft makes headway in mobile when their mobile OS remains an also-ran. Windows Phone has been around in its rebooted form for almost four years now, and market share is still, what, 5% at best. Are WIndows Phones in some sort of long game that I don't understand? Where's the growth?
Reply  |  Post Message  |  Messages List  |  Start a Board

Widely used, yes. But great, I'm not so sure. Office is okay. But there's something wrong with the fact that I've paid for more or less the same word processing program every two or three years since 1989. Frankly, it's baffling that Office is so entrenched and that efforts to challenge it haven't really succeeded. I suppose it's my fault for not loving Linux and OpenOffice more.
Reply  |  Post Message  |  Messages List  |  Start a Board

True, Office's iron grip on the computing world is a bit baffling. It's not that good. I think Microsoft does have have some great productivity tools in place like Lync, Skype, Yammer, and Sharepoint, if Sharepoint is managed well. The problem has been packaging all these tools in a clear narrative. Ballmer could never do it well, but it seems to be Nadella's mission.
Reply  |  Post Message  |  Messages List  |  Start a Board

OpenOffice and Google Docs can be hard to love when the people you're collaborating with are on MS Office, and the file conversion feature doesn't quite cut it.
Reply  |  Post Message  |  Messages List  |  Start a Board
InformationWeek Is Getting an Upgrade!