Microsoft kicked off its SharePoint 2014 conference on Monday with a preview of new Office 365 technologies designed to make the cloud-based productivity suite more collaborative and cohesive.

Users openly share information on Facebook, Twitter, and other popular social platforms, but at work, the experience tends not to be like that, Office GM Julia White told InformationWeek in an interview. She said Microsoft wants its new products to "cut through the noise" by focusing on a personalized experience that recognizes the user's current needs and automatically surfaces relevant content.

Microsoft's plans hinge on Office Graph, which was introduced Monday and provides an "intelligence fabric" that runs in the background, constantly analyzing content and mapping relationships. A forthcoming application codenamed Oslo will be among the products that rely on Office Graph. It will provide an individualized dashboard that displays content, people, and activities germane to the user, including notes that remind the user why certain a given piece of information is useful.

Oslo will know a user's meetings, what was shared in those meetings, who attended, and what kind of content is trending around those collaborators, White said. She emphasized, however, that Oslo "respects privacy and settings." 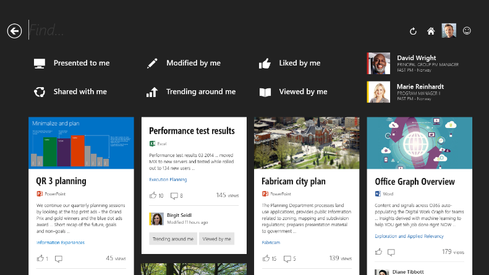 Microsoft said Oslo will automatically display the information most relevant to the user.
(Source: Microsoft)

White said Oslo will initially appear both as a Windows Store app and as component of Microsoft's browser-based Office Online. Additional native apps will follow. White said the apps will "render nicely" on all form factors.

Microsoft also introduced Groups, which aims to improve collaboration by unifying contacts, conversations, calendars, emails, and files across the Office 365 suite into a single workspace. White said companies aren't interested in deploying a variety of separate collaboration and productivity products, and that Groups will provide a more holistic way for individual employees to collaborate and see how surrounding activities fit together.

Users will be able to create a Group from anywhere within Office 365. The process will be intuitive and simple, according to White, with Office 365 automatically provisioning a Yammer conversation feed, calendar, document library, and inbox. She also said Groups will appear differently depending on the product in which it is launched, with card-based views for mobile and more traditional column-based organizational panels for many PC interfaces. Microsoft is conducting user testing to refine how Groups will look and operate. 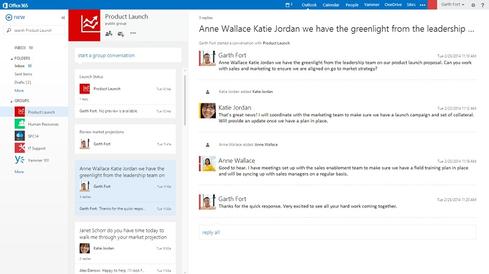 Microsoft also announced plans to integrate social conversations into documents stored in SharePoint Online and OneDrive for Business, the latter of which will be available starting in April as a new standalone SKU. The company also previewed an Office 365 video portal. The portal will securely support upload, storage, and discovery of videos, including mobile streaming. Companies will be able to organize videos into channels.

White said the new products will become available over the next year, and that Microsoft wants to be transparent about its Office roadmap. "The cloud delivery model enables us to do that," she said, noting that Office improvements used to involve multi-year engineering cycles but can now be deployed on a regular basis. White said Microsoft has introduced more than 75 new Office features in the last 12 months, an average of more than one per week. "Because we can iterate really rapidly, we can talk to people much earlier," she said.

During its SharePoint conference, Microsoft will recruit early adopters for trials, White said.

Microsoft also touted its goal to turn Office 365 into a development platform, stating that more than 3.4 million developers write for Office and SharePoint. The company debuted a new SDK for Windows and Android that allows developers to connect to Office 365 data and to build contextual experiences informed by the user's location, relationships, and projects. Microsoft also announced new capabilities aimed at IT professionals, including data-loss prevention technology that allows organizations to manage, track, and audit Office 365 content.

Michael Endler joined InformationWeek as an associate editor in 2012. He previously worked in talent representation in the entertainment industry, as a freelance copywriter and photojournalist, and as a teacher. Michael earned a BA in English from Stanford University in 2005 ... View Full Bio
We welcome your comments on this topic on our social media channels, or [contact us directly] with questions about the site.
Comment  |
Email This  |
Print  |
RSS
More Insights
Webcasts
4 Practical Tips for Building a Data Lake
Multi-Cloud Data Management for Modern Applications
More Webcasts
White Papers
Guide to Enabling 5G Deployments
Top Serverless Security Risks and How to Mitigate
More White Papers
Reports
Enabling Enterprise Resiliency Through Cyberthreat Detection
Gartner Market Guide for Insider Risk Management Solutions
More Reports

Microsoft is getting more social. But will the younger office workers bring their own social networks to the office on their first day of work, the way their bringing smartphones and tablets? Microsoft is entrenched, and is speeding up its software delivery process -- roadmaps are much less important than they used to be. But it's going to struggle to get back into the consumer's good graces as computing continues to migrate away from the PC.
Reply  |  Post Message  |  Messages List  |  Start a Board

That's interesting, Chris-- I hadn't seen that interview before. I think some kind of road map transparency is desirable, but in an age of continual iterations and updates, the Google guys bring up a good point.
Reply  |  Post Message  |  Messages List  |  Start a Board

When we had some top Google App execs at the InformationWeek Conference a year ago, a hot debate kicked up over whether a roadmap was even important, since the Google execs downplayed the importance of that kind of long-term plan and emphasizing instead the frequent change driven by consumer markets. (Link below). Think MSFT can pull off this balancing act -- we'll give you the roadmap, but iterate on new stuff more quickly?

I think it's noteworthy that Office GM Julia White talked about Microsoft being more transparent about its roadmap-- a lot of our readers criticize Microsoft for not talking enough to its customers. White was speaking specifically about Office, but her reasoning (faster iterations, cloud delivery, etc.) could just as easily be applied to other products, including Windows. It calls to mind the reports that we could see a preview of Windows 9 in April at BUILD. Then again, the talk of transparency didn't lead to any new details about Office for the iPad, or even touch-first Office for the Modern UI.
Reply  |  Post Message  |  Messages List  |  Start a Board

Which of these plans address your SharePoint pain points, readers? Or is Microsoft curating up the wrong tree?
Reply  |  Post Message  |  Messages List  |  Start a Board
InformationWeek Is Getting an Upgrade!