Microsoft shares more details on the mobile Office for Windows 10 at this year's Mobile World Congress.

Microsoft has been slowly rolling out updates to its upcoming Windows 10 operating system since the OS was first announced in January. This week, it delivered new updates on the development of Windows 10 for mobile devices at Mobile World Congress in Barcelona. In addition, Redmond is detailing new features of Office for Windows 10.

The most recent wave of Office announcements follows a busy February for Microsoft.

The first preview of Office for Windows 10 debuted early in the month, giving Windows Insiders a chance to test Word, Excel, and PowerPoint in the new Windows Store Beta. Almost one week later, it unveiled an update for Office Online, which was soon followed by an expansion of cloud services for Office.

This year's MWC saw the debut of two new features, Insights and Tell Me, intended to enhance the Office user experience across applications. Insights allows users to research words and phrases by sifting through the Web for contextual information. If they want to research and create commands, users can use smart-search capability in Tell Me to easily complete tasks such as building charts.

Microsoft has also shed some light on additional Office features with particular attention towards Excel and Outlook, which have recently been in the spotlight after being launched on iOS and Android platforms at the end of January. 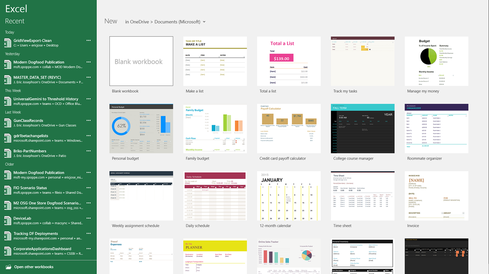 While most people consider Outlook as primarily an email app, Microsoft seems to be emphasizing that email is only one part of Outlook's functionality, and that its calendar features are also valued among consumers. Now Outlook will be integrated with apps such as Word, Excel, and PowerPoint, and that will facilitate easy navigation between the platforms.

Excel users are promised a new, more appealing interface with improved functionality across all devices. This includes new features and smart scrolling to make Excel easier to use on touchscreen products. Navigating menus will also be simpler with the transition of the Ribbon menu into a new offering called Palette mode.

Kelly Sheridan is the Staff Editor at Dark Reading, where she focuses on cybersecurity news and analysis. She is a business technology journalist who previously reported for InformationWeek, where she covered Microsoft, and Insurance & Technology, where she covered financial ... View Full Bio
We welcome your comments on this topic on our social media channels, or [contact us directly] with questions about the site.
Comment  |
Email This  |
Print  |
RSS
More Insights
Webcasts
Keys to Better Cyber Risk Assessment
How the Rapid Shift to Remote Work Impacted IT Complexity and Post-Pandemic Security Priorities
More Webcasts
White Papers
Annual Cybercrime Report
Data-Driven Vulnerability Remediation with Vulcan Cyber - A Case Study With Snowflake
More White Papers
Reports
We Need Your Input: Trends in Workforce Optimization
2021 Application Security Statistics Report Vol.2
More Reports