Social networks can be both hero and villain during disease outbreaks and other public panics.

When Dr. Kent Brantly was quarantined in a specialized medical plane midway across the Atlantic Ocean from Liberia, where he had been infected with Ebola, he had no way of knowing he was adding fuel to an already raging firestorm of social media chatter.

The fear of outbreak in the United States rippled through social media networks, with the likes of Donald Trump taking to the twittersphere to protest the American missionary receiving treatment stateside. Rumors arose of Ebola patients in Manhattan and, more recently, California. The hashtag "Ebola" topped the charts for weeks running. Brantly's arrival even prompted Yahoo's Twitter account to be hacked, claiming the infection had already spread to 145 people in Atlanta (more on that later).

Meanwhile in West Africa, where mobile phones are ubiquitous, social media have been equally inundated with activity. The outbreak has claimed more than 1,300 lives, and residents are desperate for information. Fast Company calls it "the first major outbreak in the era of social media," and it serves as a case study for the role of social networks in large public panics.

The conclusion: It's a double-edged sword. On one hand, social media are a crucial mode of communication, as they were in the case of Israeli rocket strikes or Arab Spring protests. Information about outbreaks and treatments can reach remote areas within milliseconds, warning would-be victims of potential and ongoing outbreaks in real-time. However, social media are as unregulated as they are democratizing.

The Ebola outbreak has unveiled a darker side of social media -- the voracious spread of misinformation. Rumored preventatives and cures rapidly gain traction online as desperate West Africans search for any method to counteract the thus-far untreatable disease. Eating raw onion, eating kola nut, or drinking coffee have all surfaced as solutions. In Nigeria, two people died from drinking salt water -- making misinformation in that country half as deadly as the disease itself. The rumored cure has hospitalized dozens more.

The ill-informed noise on social media has made it difficult for legitimate sources, such as the Center for Disease Control (CDC) or the World Health Organization (WHO) to make their voices heard. The CDC was forced to dramatically increase its Twitter presence to combat the spread of misinformation. Twitter users have been making hashtags like #EbolaFacts or #FactsOnEbola in an attempt to compile accurate information. Sites have popped up to curate and aggregate authoritative posts from across the web.

The danger of misinformation on social media is further compounded when it's exploited for nefarious purposes. Yahoo's Twitter account was hacked last week, posting a tweet to 1.3 million followers that 145 people had been hospitalized in Atlanta. It took 10 minutes for the tweet to be removed -- in Internet time, that's more than enough to make serious waves. These cyber attacks prey on social media's powerful ability to spread messages with unprecedented speed. By taking advantage of a large public panic like the Ebola outbreak, the results can be dramatic. Yahoo was able to get the post removed without a dramatic backlash, but the potential for serious damage is all too obvious. 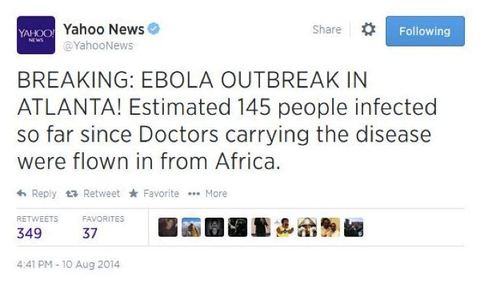 Yahoo is only the tip of the iceberg. Consider the risk of misinformation to any highly regulated, consumer-facing industry. Late last year the Federal Financial Institutions Examinations Council (FFIEC) released guidelines to govern banks' use of social media. The guidelines are intended "to help financial institutions understand potential consumer compliance and legal risks, as well as related risks such as reputation and operational risks, associated with the use of social media, along with expectations for managing those risks."

The SEC published a similar press release on compliance and company announcements. A Gartner report from this April took social media and regulatory issues one step further, arguing that the FFIEC’s guidelines were applicable across any regulated industry, such as healthcare, insurance, and pharmaceuticals. Risk management has gone social.

These guidelines are an important consideration by themselves, but they don't tell the full story. The bigger problem, as the CDC and WHO can attest, is that social media users outside of the organization are a liability as well. Big pharma firms need to look no further than Twitter. A cursory scroll through #viagra shows an overwhelming amount of malicious and inaccurate information posted by other accounts. Tweets link to spam, pseudoscientific articles, and fake drug sites.

Highly regulated, consumer-facing firms should be tracking and combatting what is being publically posted, both by their companies and about their companies. Flying blindly without a social media risk management program is a recipe for disaster.

The key lesson from the Ebola outbreak and the role of social media in regulated industries is that rumors -- unintentional or malicious -- feed on social media, diluting the spread of accurate information and jeopardizing the credibility of organizations. Mark Twain perhaps said it best: "A lie can travel halfway around the world while the truth is putting on its shoes."

Evan Blair is a Co-Founder and the Chief Operating Officer at ZeroFOX. Prior to that, he was a member of the Accuvant Leadership Team where he led the multimillion-dollar Partner Solutions practice. Evan began his career as a financial analyst with Dresdner ... View Full Bio
We welcome your comments on this topic on our social media channels, or [contact us directly] with questions about the site.
Comment  |
Email This  |
Print  |
RSS
More Insights
Webcasts
Making XDR Work in Your Enterprise - May 12
Data Center Network Operations (NetOps) Reimagined
More Webcasts
White Papers
Cisco Threat Response
The Microsoft Teams Telephony User Experience
More White Papers
Reports
Immuta Data Engineering Survey: 2021 Impact Report
Key Strategies for Managing New Risks in Cybersecurity
More Reports

The only way to combat social media misinformation is with skepticism. There should be a tax on Twitter and Facebook that flows into a fund for public service announcements explaining the danger, there should be classes in schools on critical thinking, especially applied to social media (well, maybe journalism, too). There should be all those things to promote skepticism, but it would still having a hard time competing with credulity.
Reply  |  Post Message  |  Messages List  |  Start a Board
InformationWeek Is Getting an Upgrade!