Hundreds of thousands of users have flocked to new social network Ello, which promises it won't sell advertising or your data. Here's why they won't stay.

It seems to be happening on a regular basis -- a new social network bursts on the scene with dreams of dethroning Facebook. This time it's Ello, a social network startup headed by a bicycle and toy maker.

Ello's proposition is simple: It's a safe haven for fed-up Facebookers. The social network doesn't require your real name, and promises it will remain advertising-free and never sell your data. "We believe a social network can be a tool for empowerment. Not a tool to deceive, coerce and manipulate -- but a place to connect, create and celebrate life," its manifesto reads.

Those promises are attractive to anyone yearning to break free of Facebook's shackles. But Ello probably isn't the panacea many frustrated Facebook users are looking for. 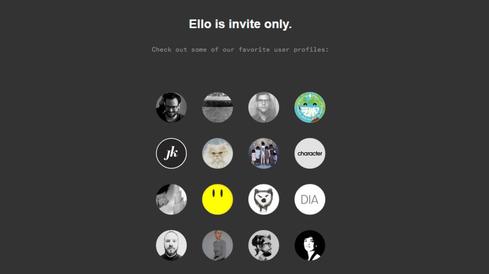 No ads, no problem?
Ello calls itself the anti-Facebook: It doesn't sell ads and it won't sell user data to third parties. "Collecting and selling your personal data, reading your posts to your friends, and mapping your social connections for profit is both creepy and unethical," it says. "We also think ads are tacky, that they insult our intelligence, and that we're better off without them."

Facebook, Twitter, Google+, Instagram, and Tumbler were all ad-free for years, but ultimately they turned to selling advertising and data to make money. Ello acknowledges its unusual stance and says that if it were to break this commitment, it would lose most of its community -- a debatable point, as Facebook has grown to 1 billion users.

Ello founder Paul Budnitz is unfazed by making money, telling BetaBeat that costs so far are low and that a freemium model is in the works. This approach, while noble, probably isn't sustainable at scale. Ello's developers -- who reportedly have worked around the clock to maintain the site -- need to be paid, after all. At some point, something will have to give: Social networks need revenue to operate, iterate, and innovate.

Buggy and boring
If you've been lucky enough to score an Ello invite, you've probably noticed the bugs -- such as how difficult it is to search for people you know -- which aren't all that surprising, considering its unexpected rise to fame. Budnitz even admitted to Ad Week that the site was "really buggy and had no capacity to handle people." Ello also suffered its first major outage this weekend, which it blamed on a DDoS attack.

Beyond the bugs is an overly simplistic design and feature set that, compared to Facebook, is refreshing at first but boring after a while. Like any other social network, you can post status updates, photos, and comments. Unique features include a counter that displays how many views a post gets and a Noise section that displays posts from people you may not know. But that's pretty much it.

Its list of features to come is nothing exciting, either: a notification center, online/offline user designation, emojis, and private accounts. That's right, private accounts -- because Ello also has no privacy settings.

Zero privacy
That brings us to Ello's most glaring shortcoming: privacy. While the social network promises to protect you from advertisers and data brokers, it has no controls to protect you from other users. All profiles are public, so anyone can find you and view your profile. There is no blocking capability, either. That's on the to-do list as well.

Ello, which is still in beta, isn't a Facebook killer. For now, it's hindered by a noble goal and unsustainable business model that will impede its ability to play catchup and offer users standard features, like privacy settings. If anything, its buzz and growth serves as a reminder to other social network behemoths that users are wary of data and advertising practices -- and willing to say hello to a reasonable alternative.

Kristin Burnham currently serves as InformationWeek.com's Senior Editor, covering social media, social business, IT leadership and IT careers. Prior to joining InformationWeek in July 2013, she served in a number of roles at CIO magazine and CIO.com, most recently as senior ... View Full Bio
We welcome your comments on this topic on our social media channels, or [contact us directly] with questions about the site.
Comment  |
Email This  |
Print  |
RSS
More Insights
Webcasts
People Are The Most Important Part of Autonomous SOC
Don't Miss This Cybersecurity Virtual Event
More Webcasts
White Papers
SUNBURST: Underlining the Importance of Right of Boom Risk Mitigation
Supercharge Incident Response with DDI Visibility
More White Papers
Reports
Accelerate Threat Resolutions with DNS
Enabling Enterprise Resiliency Through Cyberthreat Detection
More Reports

@SaneIT couldn't agree more. Anonymity has a time and a place, but it's not on a social network where you're connecting with people you already know.
Reply  |  Post Message  |  Messages List  |  Start a Board

I know that anonymity on the internet is a big deal to some people but I think that should be reserved to private services not social media.  I think that if you're going to be posting on a site where you have an audience that people should know where the opinion/content is coming from.  There are lots of pseudo private sites out there that discourage users from outing someone if they know their identity but even those are very socially based sites.  If you need anonymity say in the case of whistle blowers or ensuring your safety, social media sites are not the place for it.
Reply  |  Post Message  |  Messages List  |  Start a Board

Maybe so. But I'll bet that even if they allow you to pay to not see ads, they will still monitor what you are doing online while the application is running, nonetheless.
Reply  |  Post Message  |  Messages List  |  Start a Board

@Sane IT You're right -- fake names do bring out the worst in people. Take Google/Google+ -- YouTube was overrun with spam comments and flame wars because it didn't require users to post under their real name. When Google decided that all YouTube commenters would need to use a G+ profile (which required your real name) people weren't pleased. Spam comments, though, decreased -- as did comments overall. Ultimately (and recently) Google went back on that policy, and commenters can resume anonymously. From a traffic perspective, anonymous profiles will increase engagement. But from a quality perspective, they're detrimental.
Reply  |  Post Message  |  Messages List  |  Start a Board

Facebook has always said it will never charge users. I wonder if it offered an ad-free version if people would pay? My guess is many would -- but it would also lose valuable data, which is probably worth a lot more.
Reply  |  Post Message  |  Messages List  |  Start a Board

@glenbren your second point is the reason they will have trouble gaining traction. After the novelty of it wears off, you're not going to stick around unless your friends are there, too.
Reply  |  Post Message  |  Messages List  |  Start a Board

I agree with everyone that Ello is just another social media site.  Whatever their goal is, they can change it at any time and they have no privacy setting.  If they really want to have a new approach to social networking sites, the founders of this site need to think a lot harder.
Reply  |  Post Message  |  Messages List  |  Start a Board

As I understand it ELLO is already beholden to Vulture Capitalists who will need to be paid back for their investment somehow.

"We believe a social network can be a tool for empowerment. Not a tool to deceive, coerce and manipulate..."

Hmm, no requirement to use your real name on a social media site and then a statement that it is not a tool to deceive or manipulate.  I don't buy that for a second.  The concept may be good but when people get to stay anonymous in social media circles it tends to bring out the worst in them.  Maybe one of the freemium features will be a way to verify identities.

That's how they will ultimately make their money. They'll make obviously necessary features available only to those who pay the fee. So, instead of some mildly annoying advertisements, you'll have to pay to play. I'll stick with the ads.
Reply  |  Post Message  |  Messages List  |  Start a Board
Page 1 / 2   >   >>
Editors' Choice
Hot Topics