Facebook's latest mobile app feature uses your device's microphone to listen in on songs, TV, and movies. Here's what you need to know before you opt in.

Facebook unveiled a new mobile app feature that uses your device's microphone to identify songs, television shows, and movies so you can quickly share with friends what you're listening to or watching.

The audio-recognition capability, which Facebook will roll out in the coming weeks, is opt-in and available only for Android and iOS users in the United States. If you turn it on, you'll see an audio icon moving on the screen when you compose a status update. If Facebook finds a match to what you're watching or listening to, you can add the song, TV show, or movie to your post.

According to Selekman, the audio feature identifies only TV and music -- it cannot discern background noise or conversation. It does not save or store any sound, he said, and you can turn it off whenever you want by tapping the sound bar icon so it turns gray. 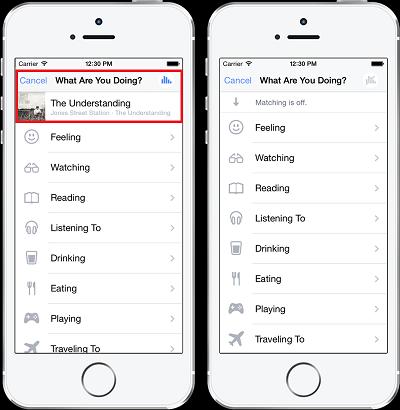 Last year, Facebook added "feelings and activities" options to the status update box. Users can browse a variety of emotions to add to their status -- such as excited, stressed, or angry -- or choose an activity, such as playing basketball, traveling to San Francisco, or drinking coffee. Facebook's new audio recognition builds on this feature, simplifying the steps to add details about songs, TV, or movies.

Facebook's Selekman said feelings and activity updates have been particularly popular among users. "In the last year, people shared more than 5 billion status updates that included these kinds of feelings and activities, sparking conversations with friends in a more visual way," he said.

Facebook's new audio-recognition capability is the latest addition to its mobile app that keeps a closer eye -- or ear -- on your activity. Last month, Facebook unveiled Nearby Friends, which alerts your friends when you're in close proximity.

While Facebook pitches its latest additions to its mobile app as shortcuts to sharing and meeting up with friends in person, Facebook ultimately benefits: more data about users' entertainment habits, which translates into better-targeted advertising.

Facebook's Selekman told TechCrunch that while advertisers cannot yet target ads using data from the audio-recognition feature, it will likely happen: "It's definitely something we've thought about and will potentially do in the future," he said.

Kristin Burnham currently serves as InformationWeek.com's Senior Editor, covering social media, social business, IT leadership and IT careers. Prior to joining InformationWeek in July 2013, she served in a number of roles at CIO magazine and CIO.com, most recently as senior ... View Full Bio
We welcome your comments on this topic on our social media channels, or [contact us directly] with questions about the site.
Comment  |
Email This  |
Print  |
RSS
More Insights
Webcasts
The Experts Guide to Ransomware Response
Multi-Cloud Data Management for Modern Applications
More Webcasts
White Papers
The Path to Successful Hyperautomation Starts With the Help Desk
World Wide Technology: Digital Transformation Customer Journey
More White Papers
Reports
Are We Cyber-Resilient? The Key Question Every Organization Must Answer
The State of Endpoint Security
More Reports

I don't think that's how they intend you to use it, though I'm sure some people will. It's meant to be more of a convenience factor to encourage you to share more (obviously so it can collect more data). Before, you'd have to type in what you were watching or listening to -- this will do that automatically.
Reply  |  Post Message  |  Messages List  |  Start a Board

I'm not sure -- you'll probably just have to try it out. Facebook says they're able to identify "millions of recorded songs or TV shows currently broadcasting on over 150 channels." If it doesn't match what you're watching or listening to, it might later down the road -- they'll be updating it with more.

As someone who prefers to download music or rip it from a CD to store it on a local device, I just don't get how you could not know what you're listening too.
Reply  |  Post Message  |  Messages List  |  Start a Board
InformationWeek Is Getting an Upgrade!