Facebook will drop the chat feature from its main app and require users to download Messenger. You will have one week to make the switch.

Facebook will soon retire the messaging feature in its main iOS and Android apps and instead require users to download a separate app to chat with friends.

This week, the social network began alerting users both in-app and via email that they will need to download Messenger to retain mobile Facebook chat capabilities. Once you see the notifications, you'll have one week to download the app, the company said.

Facebook announced back in April that it planned to uncouple the messaging feature from its mobile apps. Messenger is faster than the messaging function currently built into the main Facebook app, the social network said, and separating the two will make both applications faster. Users reply about 20% faster on Messenger than on Facebook, the company said.

"In the next few days, we're continuing to notify more people that if they want to send and receive Facebook messages, they'll need to download the Messenger app," Facebook said in a statement. "As we've said, our goal is to focus development efforts on making Messenger the best mobile messaging experience possible and avoid the confusion of having separate Facebook mobile messaging experiences."

While managing two separate apps may seem like a hassle, Messenger and Facebook integrate seamlessly. You'll still see notifications in the main Facebook app when you receive messages, but tapping the icon will open Messenger, where you can reply to or send messages. Tapping the back button in Messenger will take you to where you were in Facebook. You can still send and receive messages on the desktop version, too. 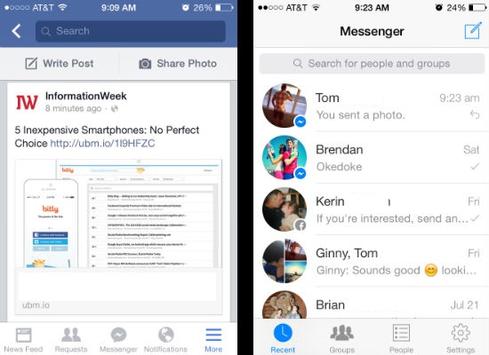 Messenger's features are more robust than the in-app chat feature. For example, you can make free calls -- including international ones -- over WiFi; send pictures, videos, and voice messages; and use its own set of emoticons, which it calls Stickers.

After you download Messenger, Facebook will ask if you want to import and sync your contacts. If you import contacts, Facebook will store this information on its servers where it may be used to help others search for or connect with people or to generate suggestions for you to others, it said. It may also import information from your contact list and message folders, too.

While uncoupling the messaging feature from its main app may not be popular among users, Facebook isn't the only social network to do so. In May, Foursquare split into two apps -- one exclusively for check-ins, called Swarm, and its rebranded main app for reviews. LinkedIn has also launched a number of standalone apps that concentrate on singular site features, including Connected and its Job Search app.

Facebook's Messenger app is set to make the social network big money, but not in the near future, CEO Mark Zuckerberg said during the company's earnings call last week. "We could take the cheap and easy approach and put ads in and do payments and make money in the short-term, but we're not going to do that," he said. "We're going to take the time to do this in the way that is going to be right over multiple years."

LinkedIn does not carry the rep that FB does with users for changing the interface/tweaking settings and now requiring additional apps. FB has asked users to digest much more UI change.
Reply  |  Post Message  |  Messages List  |  Start a Board

I talked to LinkedIn about its reasons for unbundling its main app into several others. It's POV: LinkedIn wants its apps to be simple with obvious use cases. A quote from the LinkedIn product lead:

"We look at our new apps as an a la carte menu. You may be using the Job Search app and Connected app because you want to warm up your job network while networking. Later, you might drop the Job Search app since you have a new job. We want to help our members create better ways to make lasting relationships happen."

That makes sense to me, but there is a big difference between what LinkedIn is doing and what Facebook is doing: LinkedIn's main app still features these capabilities, while Facebook's doesn't.
Reply  |  Post Message  |  Messages List  |  Start a Board

I think that might be part of its reasoning. Stripping out the messaging feature makes its flagship app run faster and take up less space. If you don't use Facebook to message friends, that's great. If you do, run it separately. Still, though, keeping the feature in-app seemed to have worked well for everyone.
Reply  |  Post Message  |  Messages List  |  Start a Board

You won't notice it switching between apps. It's similar to moving from your news feed to a friend's profile. What would be useful is moving from Messenger to Facebook without needing to open the app. It works just fine Facebook > Messenger >Facebook, but not Messenger > Facebook.
Reply  |  Post Message  |  Messages List  |  Start a Board

Facebook simply wants to prove to the world once more that it dominates the social media industry. Think about it; the facebook messenger that you have right now I bet it is working for you just fine but what about if you had this independent application, how fast and efficient will it be? I like this idea and I just can't wait for it.
Reply  |  Post Message  |  Messages List  |  Start a Board

. . . we're continuing to notify more people that if they want to send and receive Facebook messages . . .

The key word in here is "if".  If you want to send FB messages from your phone, I for one do not.  I barely ever even sign onto FB on my desktop or laptop and don't have the FB app on my phone.  If something important happens someone will let me, if someone washes their hands or goes to the store, I don't really care.
Reply  |  Post Message  |  Messages List  |  Start a Board

Yet another example of Facebook fixing things that aren't broken.  From what I've seen, any alleged improvements to the GUI almost always results in the exact opposite of what users prefer.   Given the on-going nuisances with the algorithm that keeps being perpetually reset in order obscure posts from pages that have not paid to play, the platform becomes increasingly irrelevant unless you have deep pockets.
Reply  |  Post Message  |  Messages List  |  Start a Board

That's weird. I thought the speed of my Facebook messages was just fine. I can't imagine it working any faster than it already does. I guess that I will have no choice but to switch over.
Reply  |  Post Message  |  Messages List  |  Start a Board

I never noticed a speed problem with FB messages. I sure hope it's seamless because it seems inconvenient to need two apps.
Reply  |  Post Message  |  Messages List  |  Start a Board
Editors' Choice
Hot Topics