Facebook has redesigned its News Feed to be more engaging for users and more profitable for the company.

Speaking at a media event Thursday at the company's headquarters in Palo Alto, Calif., CEO Mark Zuckerberg said, "What we're trying to do is give everyone in the world the best personalized newspaper we can."

The new design is more consistent across the Web, tablets and mobile phones and more visually appealing, thanks to a greater emphasis on images over text. In practical terms, Facebook's focus on improved personalization means that users will have more control over the content they see.

For example, Facebook is introducing several new feeds to complement its existing News Feed. There's an All Friends feed that lists everything shared by friends in chronological order. There's a Photos Feed that's just photos from friends and liked pages. There's a Music Feed that includes posts about music and local concerts. And there's a Following feed, which carries news from liked pages and followed people, not unlike Twitter.

Chris Cox, VP of product at Facebook, said the new design is "about getting Facebook out of the way as much as possible." Evidently, the company has recognized that it needs to provide users with the option to see everything posted by friends or followed entities, rather than only surfacing a subset of posted content.

This is a fairly significant revision of Facebook's approach to the social ad business, given that earlier this year, Zuckerberg described Facebook's business as resting on three pillars: News Feed, Timeline and Graph Search. These new feeds represent a lot more pillars, or a major reinforcement of the News Feed pillar. 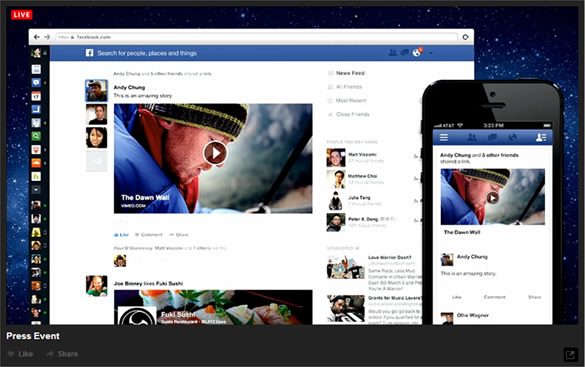 "[N]ow we have this News Feed ads business that we barely tuned and there's a big opportunity in front of us to make every ad that we're showing a lot better," said Zuckerberg. "... As our News Feed design evolves to show richer kinds of stories, that opens up new opportunities to offer different kinds of ads as well."

Facebook's News Feed is already a success on mobile devices. According to eMarketer, the company took in 18.4% of the $4 billion U.S. mobile display ad market in 2012, ahead of Google's 17%. The redesign should help Facebook do even better in the mobile ad market.

Facebook's redesign starts rolling out on the Web Thursday, and is expected to reach mobile devices in a few weeks.

We welcome your comments on this topic on our social media channels, or [contact us directly] with questions about the site.
Comment  |
Email This  |
Print  |
RSS
More Insights
Webcasts
DevOps: Innovating with Speed, Security, and Quality
Securing Active Directory the Way it Deserves
More Webcasts
White Papers
Wired vs. Wireless LAN Solution
2020 State of Malware Report
More White Papers
Reports
Online Threats -- and What Your Org Can Do About Them
[Special Report] Remote Network Management
More Reports

Giving more importance to visuals is good, and follows Pinterest and Instagram's lead. Some of the personalization of feeds seems a little redundant from a user's perspective, but time, advertisers, and shareholders will tell.
Reply  |  Post Message  |  Messages List  |  Start a Board

I think that Facebook got it mostly right with this change. The new look is really stunning.